Opposition beckons for Fico and Slota

AN END to dubious tenders, greater transparency, changes to controversial legislation such as the State Language Act, the Press Code and the state citizenship legislation, renewed reform of the education and health-care systems, along with a different approach to the second, private pillar of the country’s pension system: these are all changes that an eventual centre-right coalition government might bring if and when Smer leader and current prime minister Robert Fico gives up trying to form the next government. 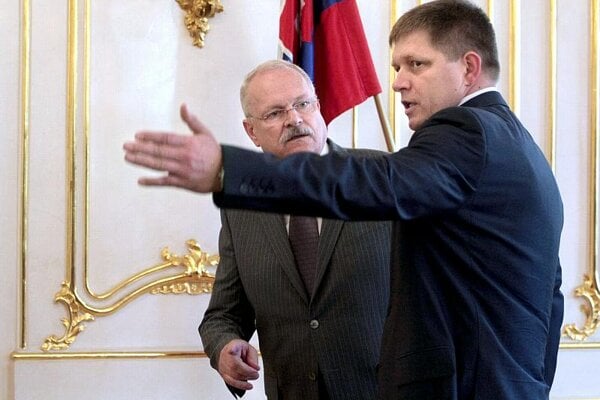 AN END to dubious tenders, greater transparency, changes to controversial legislation such as the State Language Act, the Press Code and the state citizenship legislation, renewed reform of the education and health-care systems, along with a different approach to the second, private pillar of the country’s pension system: these are all changes that an eventual centre-right coalition government might bring if and when Smer leader and current prime minister Robert Fico gives up trying to form the next government.

The Slovak Democratic and Christian Union (SDKÚ), the Freedom and Solidarity party (SaS), the Christian Democratic Movement (KDH), and Most-Híd, which together hold a slight majority in Slovakia’s new national parliament, elected on June 12, also agree that Slovakia’s judiciary is also ripe for a clean-up.

Along with the question of how the potential centre-right, four-party coalition will rule once SDKÚ election leader Iveta Radičová is charged with the task of forming the next government, is the equally intriguing question of how Fico will function in opposition after ruling the country for four years in coalition with the Movement for a Democratic Slovakia (HZDS) and the Slovak National Party (SNS).

“No matter what happens from this moment on, I am an absolutely satisfied and reconciled person, because I am telling myself that we have achieved something if we have such huge support from the Slovak public,” Fico told SITA newswire on June 13 after learning that his party collected 34.79 percent of the vote in the general election.

At that time Fico also said that if President Ivan Gašparovič charges him with forming the next government he would do a “very quick round and when I see that it is not possible we will give room to the right-wing parties”.

As it turned out, Gašparovič gave Fico ten days to try to form a government. If he fails, Fico will return to opposition. Whatever happens, observers assume that his style will remain confrontational.

Political scientist Grigorij Mesežnikov said that from 1999 until 2006 Smer was a pretty radical opposition party, something he attributes to Robert Fico’s personality, described it as “aggressive and authoritarian”.

“He was a rather radical opposition representative and one should assume that as far as his rhetoric is concerned, he will remain tough and attacking in the very same way and will do his best to complicate the life of the ruling coalition,” Mesežnikov told The Slovak Spectator.

What is changing, according to Mesežnikov, is the fact that now Fico will not be able to criticise the government from the position of someone who has never ruled the country.

“What happened over the past four years will certainly be part of the confrontation of opinions with the ruling coalition,” Mesežnikov said. “Fico will no longer remain in a comfortable position from which he can criticise everything as someone else’s responsibility. He will have to respond to [more] revelations which will certainly break out after his departure into opposition. This will certainly disturb his opposition plans.”

In fact, Fico has already started criticising what he foresees as the potential policies of the right-wing coalition: possible tuition fees for full-time students, changes to the Labour Code or the publicised intention of SaS leader Richard Sulík to decriminalise marijuana, SITA wrote.

In opposition, Fico would have a single partner: Ján Slota and his Slovak National Party (SNS), which collected 5.07 percent of the vote and nine seats in parliament.

The role of the SNS in terms of the balance of power or its influence on decision-making in parliament will be marginal, said Mesežnikov.

“It will be confronted by internal problems and it cannot be excluded that there will be conflicts involved,” Mesežnikov said, adding that the party will have to undergo some self-reflection due to the scandals that emerged during its time in government.

Mesežnikov says that the only chance for the SNS will be to play the so-called ‘Hungarian card’ and here it will be difficult to predict the situation.

“The Hungarian Coalition Party [SMK] has not made it into parliament and the representation of the Hungarian minority in parliament has decreased,” Mesežnikov told The Slovak Spectator, adding that he expected tensions between Slovakia and Hungary to ease under a right-wing government.

Meanwhile, Slota said that he was ready to offer his resignation as leader on September 12 when the SNS holds its congress. His deputy Anna Belousovová has not yet said whether she will run for the party chairmanship.

Slota said that the election results were in fact a defeat for Slovakia.

“If any of the Hungarian bodies make it into parliament, during their rule there will be political autonomy in southern Slovakia,” said Slota on June 12, when the preliminary results were coming in. “It makes me want to cry; Slovaks have saddened me. We all will be crying bloody tears.”

In his initial reaction to the election results, Fico noted that Smer, after four years of rule, the economic crisis and the January 2009 gas crisis, had increased its share of the vote by almost 6 percentage points compared to the 2006 result, something which he interpreted as never having happened in Slovakia before.

“We will do everything so that Smer remains a dominant political body on the Slovak political stage,” Fico said on June 13.

Fico several times suggested that the “rightist mush-up does not have a chance to survive” and that Smer would be such a tough opposition party that he would give such a coalition only a year or so, according to SITA. Fico also said that he could not imagine how the centre-right parties would rule.

He also said that he looks forward in the same way to how “the KDH will agree to homosexuals getting married in Slovakia”, referring to the support of SaS for the registration of same-sex partnerships.

Political scientist Kevin Deegan-Krause said that Smer’s success in attracting a significant inflow of voters from the SNS and HZDS might mean that it finds its electorate moving markedly towards the older and more rural side of Slovakia's demographic spectrum, ending up where HZDS did in about 1994 or 1996.

“It would not surprise me to see Smer move even more fully into the ideological space formerly occupied by the HZDS in the late 1990s of "the (not-as-radical-as-Slota) defender of Slovakia's national sovereignty," Deegan-Krause said.

Also, although Smer will go into the new parliament with a large number of opposition deputies and despite the party’s previous performance in opposition having been quite disciplined, Deegan-Krause points out that this did not happen without “the carrots (and sticks) of parliamentary and government offices”.