The Slovak Spectator announces its first ever Kitsch Competition and invites our readers to post or mail their favourite post-Communist or Communist kitsch. The deadline for submitting entries is July 4. Please submit your entries by regular mail to The Slovak Spectator, Lazaretská 12, Bratislava 811 08, or via email to spectator@spectator.sk with CONTEST in the subject line or by posting your entries on the Spectacular Slovakia Facebook page. 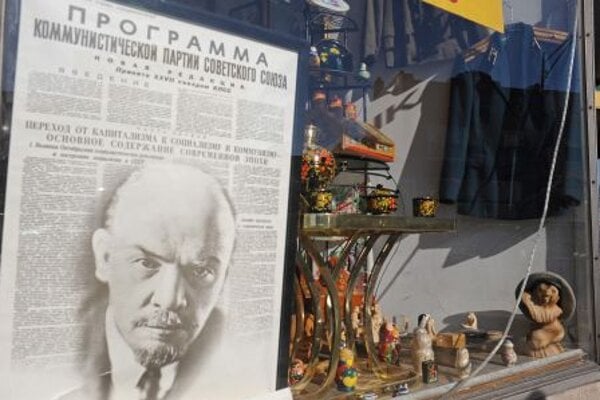 The Slovak Spectator announces its first ever Kitsch Competition and invites our readers to post or mail their favourite post-Communist or Communist kitsch. The deadline for submitting entries is July 4. Please submit your entries by regular mail to The Slovak Spectator, Lazaretská 12, Bratislava 811 08, or via email to spectator@spectator.sk with CONTEST in the subject line or by posting your entries on the Spectacular Slovakia Facebook page.

Last November Slovakia marked the 20th anniversary of the collapse of the communist regime with local media undertaking the gargantuan task of collecting memories and recollections of former dissidents, onetime students and revolutionaries, as well as members of the Communist Party. Many suggested that people now in their mid thirties might be the last generation to remember life under the previous regime, along with the pains of the post-communist transition with all its clichés and items of mass celebration.

Since kitsch has been such an integral part of many societies, we are now inviting our readers to share images, items, songs or brief videos that in their opinion best characterise the communist period and the post-communist transition in Slovakia or in the neighbouring countries.

One of my contributions is a short video capturing Spartakiada, a mass gymnastic display with thousands of young people of different ages participating to prove the vigour of the citizens of communist Czechoslovakia. I never made it to Strahov Stadium in Prague to be part of Spartakiada – I was told I was too big and awkward and simply did not fit into any of the pre-produced outfits that my peers wore to perform. When fuelled by the desire to prove I was fit enough, I tried on my classmate’s outfit and tore its seams. This was my Spartakiada.

Today, the image of that sea of happy children ordered into a massive stadium moving in unison while joyfully singing makes me smile and reminds me how novelist Milan Kundera characterized kitsch: “Kitsch causes two tears to flow in quick succession. The first tear says: How nice to see children running on the grass! The second tear says: How nice to be moved, together with all mankind, by children running on the grass! It is the second tear that makes kitsch kitsch. And no one knows this better than politicians. Kitsch is the aesthetic ideal of all politicians and all political parties and movements.”

The Slovak Spectator’s Kitsch Competition does not aim to assume the view of an art critic or to condemn or ridicule sentiments of people by having a good laugh over a chubby garden gnome holding a peace dove in its hand. We do understand that societies no longer have a firm definition of kitsch as only the worthless imitation of recognized art or a sterilised view of reality purified of the pain and ugliness of the human condition. In our post-modern times, with all our integration and mass production of what we call valuable or artistic, the sharp dividing line between kitsch and what art critics call high-art has become blurred.

We also understand that kitsch must often be treated as part of one’s history and history in central and eastern Europe is still very much alive while people’s memories are like precious little objects that break if touched with haste and torn out of their historical context.

The Slovak Spectator does not wish to create a public archive of kitsch – all we are trying to do is to collect and subsequently share with our readers some images, sounds and items from the recent past which they may have never seen or might have forgotten.

All entries will be evaluated by Amanda Rivkin, an American journalist and author of this year’s Spectacular Slovakia, the parent of the idea for the kitsch competition, assisted by The Slovak Spectator team. The Slovak Spectator will share the best entries with our readers and some of the best entries might be donated to the Kitsch Museum in Kremnica, which will be featured in this year’s Spectacular Slovakia travel guide.

Those submitting the best entries will be announced on The Slovak Spectator website and receive a free one-year subscription to the online-version of The Slovak Spectator, copies of all our special publications, a special place in our very own collective memory and, of course, some object d’kitsch worthy of their efforts.