Wien/Bratislava June 11, 2010 - Chopin Airporthotel Bratislava has celebrated its first anniversary in existence at its '1st Anniversary Party'. An extended conference facility was presented to international visitors, accompanied by live music and entertainment events. This conference facility provides space for meetings and other events for as many as 318 guests. 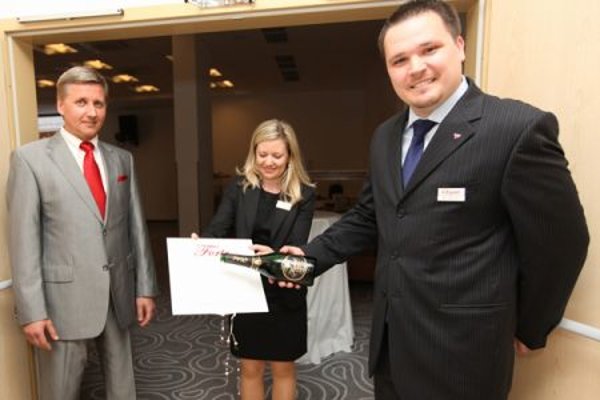 Wien/Bratislava June 11, 2010 - Chopin Airporthotel Bratislava has celebrated its first anniversary in existence at its '1st Anniversary Party'. An extended conference facility was presented to international visitors, accompanied by live music and entertainment events. This conference facility provides space for meetings and other events for as many as 318 guests.

More than 300 visitors came to Chopin Airporthotel Bratislava on June 10th, 2010 to celebrate the hotel's first year of existence. The premises of the hotel offered a first class atmosphere for an interesting and entertaining program: international guests were captivated by a live concert in the lobby of the hotel, a casino, a Cuban night with a Caribean athmosphere and professional whisky tasting. DJs played music until the early morning hours.
The highlight of the event was the opening of an extended conference facility - new conference room Forte. The new space with 160 m2 can accommodate as many as 160 guests in the theatre seating. The conference room´s name was chosen in an on-line voting, in which more than 200 hotel fans selected their favourite name out of 10 options.

Adding the new meeting room has made it possible to double the hotel´s capacity – there are now six confernece rooms offering space for more than 318 guests. Thanks to the various sizes of the rooms and the most modern audiovisual techniques, Chopin Airporthotel offers excellent conditions for conferences and events of any kind.

In order to try the conference facilities of the Chopin Airporthotel Bratislava, the hotel is offering a complimentary room rental on any meeting room if minimum of 10 sleeping rooms are booked for the period till September 19th 2010. For conferences without accommodation, a 50% room rental discount is to be offered.

Convenient position in the centre of Europe

Chopin Airporthotel is located near M. R. Štefánik International Airport as well as Galvani Business Centre, where a number of international companies have their registered offices. If travelling by car, it takes 15 minutes from the hotel to get to the city centre with its historical buildings. Rudolf Tucek, CEO of Vienna International Hotelmanagement AG company, is therefore convinced about the location of the hotel as well as Bratislava as a destination: 'Bratislava has an increasing trend – its central position in the centre of Europe, on the border between western and eastern European markets contributes to this continuous increasing trend. The city is developing to become an important economic, touristical and cultural centre. Thus, the airport is becoming more frequently used and that is a benefit for Chopin Airporthotel.“

With the opening of the Chopin Airporthotel in Bratislava, guests already have three Chopin brand hotels to choose from. The first Chopin hotel was acquired in Cracow (Poland) in 2004. A further hotel followed in Prague (Czech Republic) in September 2008.

Vienna International Hotels & Resorts was founded in 1989. On the basis of individual management contracts, Vienna International operates and is developing a total of 40 first-class hotels and resorts (38 hotels and 2 hotel projects). The portfolio, which includes three Leading Hotels of the World, comprises city, resort, spa and conference hotels in 10 European countries: Austria, the Czech Republic, Poland, Croatia, Switzerland, France, Germany, Romania, Slovakia and Russia. In addition to holiday and leisure products internationally, e.g. in Loipersdorf, Salzburg, Carlsbad and Opatija, the focus of the destinatios is on business centres such as Salzburg, Munich, Berlin, Paris, Prague, Cracow, Łódź, Bucharest, Moscow, Ekaterinburg and Vienna.