SLOVAKIA remains attractive for Belgian investors and the economic crisis has only postponed rather than changed their interest. Belgian trade experts and investors say economic cooperation between the two countries offers several unexplored opportunities and that Belgian businesses appreciate Slovak state assistance for investors, the tax system, and the country's labour force, among other factors. 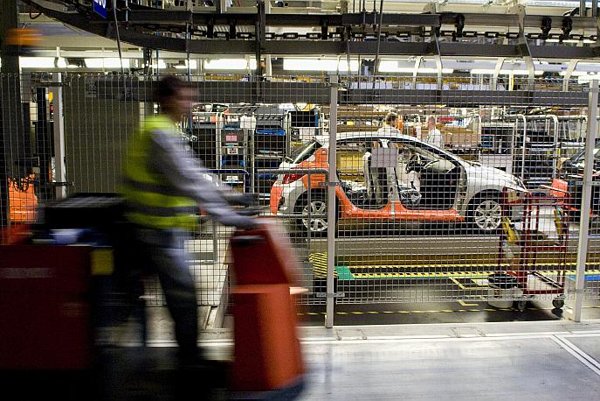 The car industry has lured many investors to Slovakia. (Source: TASR)
Font size:A-|A+0

SLOVAKIA remains attractive for Belgian investors and the economic crisis has only postponed rather than changed their interest. Belgian trade experts and investors say economic cooperation between the two countries offers several unexplored opportunities and that Belgian businesses appreciate Slovak state assistance for investors, the tax system, and the country's labour force, among other factors.

“Of course, there are always unexplored opportunities out there,” Lucia Harabinová, the trade commissioner at the Embassy of Belgium in Slovakia and the representative of the Wallonia Foreign Trade and Investment Agency (AWEX), told The Slovak Spectator. “That is also the reason for the existence of our Economic and Trade Representation of the Walloon, Brussels-Capital and Flanders Regions in Slovakia.”

The main objective of the Belgian trade representation in Slovakia is to help companies in the Wallonia, Brussels and Flanders regions to improve their export prospects. For that reason the representation office provides services to entrepreneurs in these regions, such as studies of market segments, matchmaking with potential Slovak partners, assembling information about Slovak regulations, standards and legislation and economic development, organising trade events and promoting goods and services coming from the Walloon, Flemish and Brussels regions, according to Harabinová.

“The best example of the fruitful cooperation between Belgium and Slovakia lies in the organising of trade events on a regular basis,” said Harabinová, listing trade missions by Belgian entrepreneurs in Slovakia, trade missions of Slovak buyers to Belgium as well as individual, tailor-made exchanges.

With regard to economic areas for likely future cooperation, Harabinová believes these lie in fields such as sustainable development and environmental technologies, life sciences and ecological products “as Belgium is very strong in these fields and can offer its rich know-how to Slovak partners”.

Harabinová said Slovakia remains attractive to foreign investors, including Belgians, adding that she thinks the kind of investments they will make in Slovakia in the future has not changed because of the economic crisis.

“It is not about the structure; it is rather about a postponement of their planned investments,” she said.

When addressing barriers that Belgian investors see in doing business in Slovakia, Harabinová listed an ‘unjustified fear’ of entering a milieu of unknown businesses and interpersonal connections.

“On the other hand, the advantages perceived by Belgians surely include reasonable state subsidies, an advantageous tax system, a cost-effective and well-educated labour force, and, last but not least, a very convenient logistical location in the centre of Europe,” Harabinová said.

Belgian exports to Slovakia are mainly in the area of chemical products, accounting for over 18 percent of the total, followed by means of transport (17 percent), machinery and appliances (15 percent), plastics (13 percent) and then several smaller sectors.

At the end of 2008, total foreign direct investment from Belgium in Slovakia amounted to €330 million, with Belgian firms being the 13th largest investors in Slovakia, according to preliminary data from the National Bank of Slovakia.

The views of two executives

Along with domestic companies, companies with foreign capital operating in Slovakia did not escape the negative impacts of the global economic downturn.

“Bekaert faced a lower order intake from autumn 2008 through the first quarter of 2009 as customers had stopped buying and were depleting their stocks,” Lenka Lisoneková from Bekaert Hlohovec, a company producing advanced wire and steel-cord products, told The Slovak Spectator. “To cope with the low industrial activity a number of measures were taken such as realignment of the manufacturing platform, inventory reductions, limiting credit exposure and stringent cost controls.”

Bekaert Hlohovec used the opportunity of lower production activity to train employees on specific topics and asked them to perform quality improvement tasks and research projects to maintain employment. According to Lisoneková, this prepared the company to quickly seize opportunities when the market picked up again in the second half of 2009.

Robby Bosgaerd, the general manager of VMA Slovakia and PVMA, confirmed the negative impact of the economic downturn.

“The economic downturn directly affected the serial production of small electrical assemblies as these are just-in-time deliveries that react to market demand,” he told The Slovak Spectator. “On our project business and site installations, however, the effect of the crisis was minor due to the long term nature of these projects, which run for more than one year.”

VMA Slovakia started in 2005 with a big order from PSA Peugeot Citroen in Trnava and built the electrical part of the production line. This gave the company the chance to expand its market in central Europe and cut its production costs for its home market, which was under price pressure. Another advantage was Slovakia’s flexible labour market, which made it possible to increase production on a very short-term basis when handling big projects, Bosgaerd said.

Lisoneková and Bosgaerd agreed that the economic downturn brought new challenges to their companies.

“The customer is even more demanding than before,” said Lisoneková. “A fast and accurate response to customer requests is essential – now more than ever.”

For VMA Slovakia new challenges were to optimise its organisation and purchasing procedures and to search for new applications and newer techniques which it did not have time to fully investigate before the crisis.

VMA Slovakia is now investing in the construction of a new production hall for building electrical cabinets in Trenčín Region, according to Bosgaerd. The plan is to increase the company’s production space and capacity by 100 percent by the end of 2010 or the beginning of 2011.

Bekaert’s current plans in Slovakia include further strengthening of its central European production platform and it expects to capture new market segments with additional products and in other regions outside of Slovakia, Lisoneková said.