SINCE THE beginning of June, online viewers have been able to study at first hand the habits of a family of golden eagles (Aquila chrysaetos) through a unique camera installed in the birds’ nest in the Western Tatras. 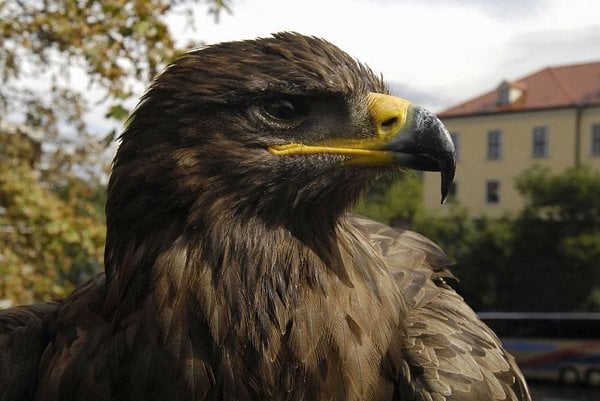 You lookin' at me? Golden eagles can now be observed live via a nest camera. (Source: TASR)
Font size:A-|A+

SINCE THE beginning of June, online viewers have been able to study at first hand the habits of a family of golden eagles (Aquila chrysaetos) through a unique camera installed in the birds’ nest in the Western Tatras.

“People react very posi- tively,” Pavol Majko, head of the Tatras National Park (TANAP) Administration told the SITA newswire. “Many appreciate the fact that they can watch a young golden eagle for 24 hours a day.”

According to Majko, the live nest camera will have a huge educational impact. In the past, the eagle has been perceived as an unwelcome varmint. Because of this project, the public can learn much more about the life of this rare bird of prey. So far the recordings have revealed a wide range of information, for instance about the eagles' diet.

The parents have brought their young offspring a range of fresh meat ranging from small rodents such as voles and sousliks to the entire thigh haunch of a small deer. Majko also found the parents’ behaviour during the recent downpours interesting. The soaked female hovered over the young one, protecting it from both rain and cold.

Both the eaglet and its mother have been tagged with rings. The mother was first marked about six years ago, when in a malnourished condition she was saved by an ornithologist in eastern Slovakia. When the baby eagle was tagged with a ring, it was named Iveta.

The camera will remain in the nest until Iveta leaves it, which is expected to be sometime around the end of July.

After that, the camera will probably be moved to a marmot colony although the environmentalists are also considering training it on a herd of chamois.

After last year’s successful use of the camera in the nest of peregrine falcon, and this year’s observations of the golden eagle, protectionists are planning to train the camera next year on the nest of a lesser spotted eagle (Aquila pomarina) or a black stork.

The golden eagle is Slovakia’s largest bird of prey. There are about 100 pairs currently nesting in Slovakia, including about ten in the Tatras National Park. All golden eagle nests in the national reserve are monitored.

The live video can be viewed at www.spravatanap.sk/ziva-kamera.