THE COALITION of four centre-right parties which is set to form Slovakia’s next government has agreed on the division of ministerial posts. Two weeks after the general election, most of the likely names are already known, although not officially confirmed; the actual composition of the cabinet should become known prior to the first parliamentary session, which is due to convene on July 8. However, there are signs that the July 8 session, whose first job will be to approve the new government, may not go smoothly given outgoing Prime Minister Robert Fico’s dissatisfaction with his party’s allocation of posts on parliamentary committee. 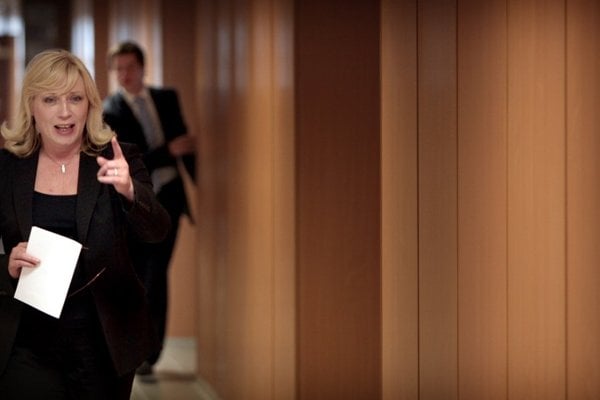 The coalition has agreed on the division of ministerial posts in the cabinet to be headed by Iveta Radičová. (Source: Sme - Tomáš Benedikovič)
Font size:A-|A+

THE COALITION of four centre-right parties which is set to form Slovakia’s next government has agreed on the division of ministerial posts. Two weeks after the general election, most of the likely names are already known, although not officially confirmed; the actual composition of the cabinet should become known prior to the first parliamentary session, which is due to convene on July 8. However, there are signs that the July 8 session, whose first job will be to approve the new government, may not go smoothly given outgoing Prime Minister Robert Fico’s dissatisfaction with his party’s allocation of posts on parliamentary committee.

The ruling four have decided to divide up responsibilities in government according to a 5-4-3-3 formula, that is five posts including the job of prime minister for the largest vote-getting party, the Slovak Democratic and Christian Union (SDKÚ), four posts for Freedom and Solidarity (SaS) and three posts each for the Christian Democratic Movement (KDH) and Most-Híd.


The division of the posts


The SDKÚ’s election leader, Iveta Radičová, should, as expected, become prime minister but the party will also get to nominate the finance, foreign, education and justice ministers. The nominees have not yet been officially announced, but the Sme daily has reported that Ivan Mikloš should once more become finance minister, reprising his role from 2002 to 2006, and that Lucia Žitňanská should again occupy the justice minister’s seat. SDKÚ chairman and former prime minister Mikuláš Dzurinda will serve as foreign minister, while economist and party freshman Eugen Jurzyca will be Slovakia’s next education minister.

SaS was the only party to immediately confirm its official nominees for ministerial posts. The party’s vice-chairman, Juraj Miškov, will lead the Economy Ministry, while Ľubomír Galko will be defence minister. SaS will also control the labour department, with Jozef Mihál becoming minister, and the Culture Ministry, which should be led by former TV talk-show host Daniel Krajcer.

The media reported that the coalition talks on the future cabinet’s composition were marked by disagreements, mainly between SaS and KDH. Both parties had aspirations to nominate the next speaker of parliament and the economy minister. KDH ultimately conceded, after it was agreed that some of the Economy Ministry’s responsibilities would be transferred to the Transport Ministry, and that the KDH would nominate the transport minister. Ján Figeľ, the KDH chairman and a former EU commissioner, will thus take that job, and will also assume the tourism brief and the agenda of the now-defunct Construction Ministry.

Apart from transport, KDH will also control the Interior Ministry, which is expected to be led by Daniel Lipšic, a former justice minister, and the Health Ministry, with Ivan Uhliarik becoming minister.

The fourth party in the coalition, Most-Híd, will nominate three cabinet members; it said it would confirm its nominees on Monday, July 5. Reports suggest that Zsolt Simon will return to the Agriculture Ministry, where he was minister in 2002-2006, and that László Sólymos will be the next environment minister, thus reviving a tradition that both these ministries are held by Hungarian-Slovak politicians (as was the case in governments between 1998 and 2006). Most-Híd will also nominate the deputy prime minister for human rights and minorities; the job is likely to go to Rudolf Chmel.


Following the agreement on the division of posts, Prime Minister-designate Iveta Radičová visited President Ivan Gašparovič to update him unofficially on how the talks were proceeding. It was not clear from reports of the meeting how relations between Gašparovič and Radičová’s government will develop. Gašparovič is known for his closeness to the outgoing government led by Robert Fico. The Movement for Democracy (HZD), the party Gašparovič founded, merged with Fico’s Smer party recently, and Fico backed Gašparovič’s successful 2009 campaign for a second term as president. In that campaign Gašparovič and Radičová, who was his main challenger, clashed sharply several times when competing in the run-off.

The future governing coalition also announced the division of posts in parliament. They said they wanted to hold with tradition and offer one of the deputy speaker posts to Smer, as the largest opposition party. The speaker of parliament will be Richard Sulík, chairman of SaS, and the other three coalition parties will each hold one deputy speaker post each. Most-Híd is likely to nominate its chairman, Béla Bugár, while KDH will probably entrust the post to former leader Pavol Hrušovský, who has previously served as speaker of parliament. The SDKÚ is expected to keep Milan Hort as its deputy speaker.

Robert Fico, however, accused the coalition of arrogantly announcing that they were taking over power in the state.

“It is a surprise to us that they reject the most elementary requirements of the opposition,” Fico complained, as quoted by SITA, after meeting the outgoing speaker of parliament, Smer nominee Pavol Paška, along with the chairmen of all six incoming parliamentary parties. Smer requested the post of chairman of the health committee but did not get it despite the fact that in the previous term it had belonged to the opposition.

Fico explained that Smer offered two variants vis-a-vis the speaker position, SITA reported: it either wanted the parliamentary speaker and two of his deputies to be from the coalition and two deputies from the opposition; alternatively, Smer wanted the right to nominate the speaker, with the ruling coalition filling the four deputy speaker positions.

Fico did not rule out the possibility that his party might resort to obstructionist tactics in parliament when substitutes for the MPs who are named as ministers and state secretaries are approved, SITA reported.

If opposition MPs try to block the work of parliament when the coalition temporarily loses its majority while appointing MPs to executive posts, it will appoint ministers three at a time, Most-Híd chairman Béla Bugár said after a meeting with Paška on Tuesday, June 29.

Slovak MPs who are appointed to executive posts must temporarily give up their seats in parliament and are replaced by substitutes from the respective party lists; if only three at a time were replaced, the new coalition would be able to maintain its relatively narrow majority.

“It's an easy thing to do: some members of the government will return back to parliament and we’ll appoint three ministers at a time,” Bugár told the TASR newswire. “However, if the opposition adopts this blocking approach, they'll put themselves under intense media pressure. After all, if they choose to act in this way the parliament will be like a circus.”

The coalition treaty between the four centre-right parties should be signed on Tuesday, July 6, according to unofficial comments from SaS and KDH. This will allow the new government to take over immediately on July 8, when the current Fico government is expected to officially resign.