ROBERT Fico posed for a final snapshot with his cabinet ministers on Wednesday, July 7. The prime minister and his colleagues were preparing to pass power to Iveta Radičová, who will now lead the quartet of centre-right parties that together won a majority in the June 12 general election. That same vote left Fico’s Smer as the largest party in parliament, but lacking a coalition partner to keep it in office. 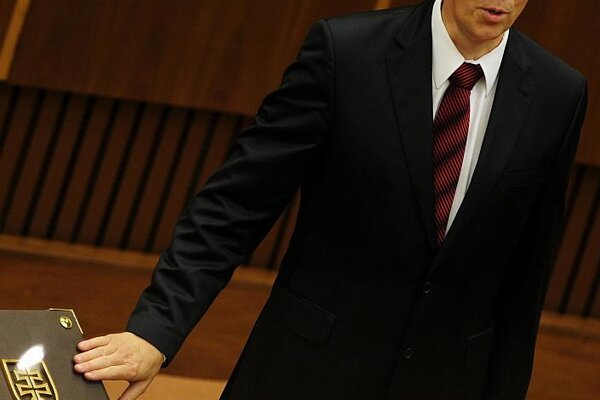 ROBERT Fico posed for a final snapshot with his cabinet ministers on Wednesday, July 7. The prime minister and his colleagues were preparing to pass power to Iveta Radičová, who will now lead the quartet of centre-right parties that together won a majority in the June 12 general election. That same vote left Fico’s Smer as the largest party in parliament, but lacking a coalition partner to keep it in office.

In a somewhat unusual move, Fico will morph from prime minister into deputy speaker of parliament, a seat that the new ruling parties yielded to the opposition. The post of speaker of parliament will be occupied by Richard Sulík, the leader of political greenhorn Freedom and Solidarity (SaS), which emerged in third place in the election. Leader of the ruling coalition’s Most-Híd, Béla Bugár, returns to one of the deputy speaker posts after a four-year break, as does another one-time speaker, Pavol Hrušovský of the Christian Democratic Movement (KDH). Milan Hort, a deputy speaker from Radičová’s party, the Slovak Democratic and Christian Union (SDKÚ), retains his position; he was the only opposition deputy speaker in the last parliament.

While Bugár expressed some surprise at Fico’s transition to the deputy speaker job, he said that the new ruling coalition would not block his election.

Fico said he wanted a smooth and quick transition without any “circus” and was interested in wrapping up the whole process on July 8, the first day of the new parliament’s first session.


The ruling coalition, which with its 79 seats holds a narrow majority of eight votes in the 150-member parliament, needs an accommodating attitude from the opposition during the brief period between its elected and sworn-in deputies taking up ministerial posts and their substitutes taking their seats. Fico promised no obstructions, while Hrušovský, according to the Sme daily, said he had a plan in the event that problems emerge.

However, the July 8 parliamentary vote to choose a speaker raised coalition blood pressures when Sulík failed, by one vote, in his first attempt to get elected. In a secret ballot, 75 of 149 deputies voted for him, while eight votes were judged invalid. Radičová put the hiccup down to the large number of novices in parliament; Sulík was elected at the second attempt, winning 80 votes.

Of the 19 parliamentary committees, the opposition will fill the chair of nine, including those overseeing conflicts of interest; education, youth and sport; culture and media; public administration and regional development; military intelligence operations; the Slovak Information Service (SIS), Slovakia’s intelligence agency; and the operation of the National Security Bureau (NBÚ).

President Ivan Gašparovič is set to appoint Radičová’s new ministers on July 9, the day after The Slovak Spectator went to print, while ministerial nominations were due to be finalised on the evening of July 8. (For the list of ministers, please go to pg 11)

Earlier this week, the local media reported that there were some unresolved issues related to ministerial nominations, particularly that of Ľubomír Galko, a former retail chain manager, to the Defence Ministry by SaS. Sulík told the TASR newswire that reports about objections by Radičová to Galko’s appointment were merely gossip. However, Bugár confirmed that there was some dissatisfaction with Galko’s nomination.

On July 8 Radičová said that Galko would have to obtain an English-language certificate by mid-October to demonstrate his language skills.

“I’ve got certain certificates which I passed in the past, but this will be a different kind of certification,” Galko said, as quoted by the SITA newswire. “The thing is that I should be able to communicate with people, as I did six years ago when my superior was a German.”

Fico has already said that Smer will be a tough opposition party and suggested that his team will return to power after the next parliamentary elections.

Political scientist and director of the Institute for Public Affairs (IVO) Grigorij Mesežnikov expects quite confrontational relations between the ruling quartet – the Slovak Democratic and Christian Union (SDKÚ), the Christian Democratic Movement (KDH), SaS and Most-Híd – and Fico’s Smer. He predicted confrontation would be initiated by the opposition.

“The opposition will certainly use the opportunities it finds and at the same time it will be attacking the ruling coalition,” Mesežnikov told The Slovak Spectator, adding that this time Fico will also be in a different position compared with his last stint in opposition, between 2002 and 2006, when he spent barely any time in parliament but instead was active mobilising his voters.

According to Mesežnikov, it will now be necessary to assess the results of the vote and the condition of the country, for which he bears responsibility – something which might limit his opportunity to blame the new government for everything.

As for the SNS, the only other opposition party, Mesežnikov assumes that it will act pragmatically and focus on ways to boost its voter support. He predicted that confrontational politics would not bring much gain for the party, which has only nine MPs. Mesežnikov said he did not expect the SNS always to take Smer’s side.

Mesežnikov also suggested that the opposition would find itself under pressure from public opinion and that the ruling coalition might submit laws during the first sessions of parliament which Fico would find it difficult not to support. For example, Smer would have to explain why it did not support limits on MPs’ immunity from prosecution, Mesežnikov said.

In one of its last moves, the Fico cabinet on July 7 recalled the head of the Public Procurement Office (ÚVO), Béla Angyal, and appointed Roman Šipoš to chair the body that oversees public procurement in Slovakia. The post traditionally belongs to the opposition. Šipoš between 1998 and 2002 served as state secretary at the Construction Ministry as a nominee of the Party of the Democratic Left, Sme reported.