SaS referendum to go ahead in September

A PETITION initiative launched last year by the newcomer political party, Freedom and Solidarity (SaS), requesting a multi-question referendum, is now bearing fruit – but it seems that the actual harvest will not conform to the timetable SaS wanted. President Ivan Gašparovič announced that the vote on the referendum, which SaS originally wanted to hold simultaneously with June’s parliamentary election, will be take place on September 18. 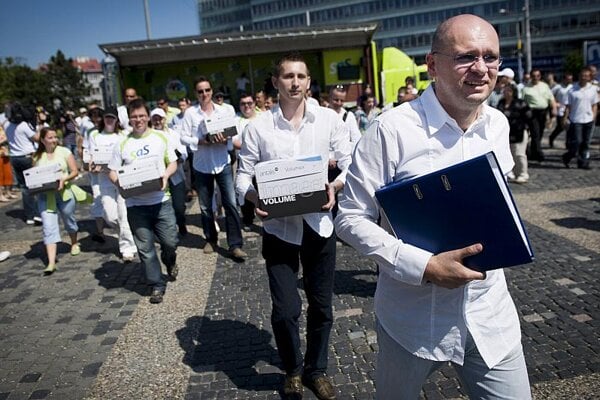 A PETITION initiative launched last year by the newcomer political party, Freedom and Solidarity (SaS), requesting a multi-question referendum, is now bearing fruit – but it seems that the actual harvest will not conform to the timetable SaS wanted. President Ivan Gašparovič announced that the vote on the referendum, which SaS originally wanted to hold simultaneously with June’s parliamentary election, will be take place on September 18.

The plebiscite includes six questions: cancelling citizens’ mandatory payments to fund public-service media; limiting the immunity of MPs from prosecution; reducing the number of MPs to 100; setting a maximum price tag for government cars; introducing voting via the internet for future elections; and excluding people with posts in the executive branch of government from exercising the right to reply established under Slovakia’s current Press Code.

“The petition initiative followed shortly after the founding of SaS, which defines itself as a party willing to propose solutions towards more transparent management of the state,” Erik Láštic, an expert on referenda and the legislative process at the political sciences department of Comenius University in Bratislava, told The Slovak Spectator. The issues in the referendum were chosen on that basis, Láštic said, adding that the petition also helped the new party to become more visible because it had limited access to the media when it was founded.

Critics of the initiative say that since SaS is now in parliament and is part of the incoming government, and because four of the six issues on the referendum are covered by the government’s programme statement, there is no longer any sense in holding the vote.

That was the spirit of what President Gašparovič stated as well: that the referendum was a speculative initiative by SaS, which had hoped to hold the referendum simultaneously with either the June parliamentary election or the November municipal elections and thus influence those results.

“The referendum will not be expensive because of the president, but because of their [SaS’s] stupidity,” Gašparovič said on the private news channel TA3.

However, SaS chairman Richard Sulík disagreed with those who argue that the referendum will now be unnecessary or a nonsense.

“If an insufficient number of voters come to vote and that number says yes but the referendum is invalid, we will push [the issues] through in parliament,” Sulík said, as quoted by the TASR newswire. For a referendum to be valid, more than 50 percent of all registered voters must take part.

Láštic conceded that with most of the issues now being part of the government’s programme statement the referendum seems unjustified, but he pointed out that setting the date for the referendum was not in the hands of SaS, which had been attempting to join the referendum vote with the parliamentary election.

“Gašparovič, although acting within the framework of his constitutional powers, did not help SaS from the political point of view when he suggested that he was not interested in SaS’s initiative and that he would call the referendum whenever he found it appropriate,” he said.

Given the present situation, Láštic believes the referendum is doomed to failure. Only one referendum that was not held simultaneously with an election, was successful – the referendum about EU accession in 2004.

SaS is not the first political party in the history of independent Slovakia to use the idea of using a petition demanding a referendum for its own promotion. Láštic mentioned the Association of Workers of Slovakia (ZRS) which in 1994 similarly managed to have a referendum held. It was a referendum about the declaration of the origins of one’s financial resources received during privatisation.

“The similarity with SaS is that the petition was launched at a time when the party wasn’t then in parliament, or had only one MP, and was trying to attract voters,” Láštic said.

The centre-right opposition parties undertook a similar initiative during the reign of the third government of Vladimír Mečiar with a referendum demanding the direct election of the president. Láštic said those parties supported the referendum partly because they believed it was an issue that could attract the support of the public.

“Unfortunately, this is also not the first time that a referendum might end up being invalid because it’s now in the hands of the political parties and the president did not do much to increase the chances of success of this plebiscite,” he said.