THE REAL condition of Slovakia’s state coffers might seem to be only a question of perspective if Slovaks are to judge based only on the statements by Robert Fico’s outgoing Finance Minister, Ján Počiatek, or his successor Ivan Mikloš. 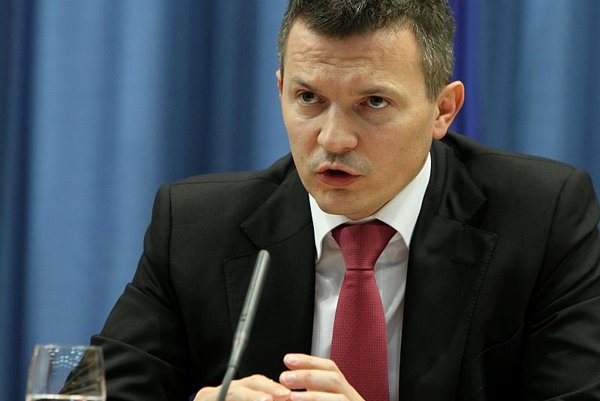 THE REAL condition of Slovakia’s state coffers might seem to be only a question of perspective if Slovaks are to judge based only on the statements by Robert Fico’s outgoing Finance Minister, Ján Počiatek, or his successor Ivan Mikloš.

While the nominee of the centre-right coalition, who is taking up the finance post for a second time, tends to use words synonymous with catastrophic to describe the condition of the country’s public finances, Počiatek, a nominee of the Smer party, is content. He said “we are not leaving the treasury empty”, adding that the outgoing government’s goal of squeezing the deficit down to 5.5 percent of GDP in 2010 is still realistic if the new government “practices what they preach”.

“I’ve accumulated €300 million in one account by putting together all the reserves we had and now they [the new government] can use it on whatever they want,” Počiatek said on July 7 after the cabinet of Prime Minister Fico resigned, having lost its majority in the the June 12 general election.

Many market watchers some time ago scrapped deficit predictions below 6 percent and are now forecasting that the deficit will reach almost 7 percent of GDP.

Some analysts have said that the new government will face a gigantic challenge in bringing the rapidly-growing public debt under control – a task which will require some drastic government belt-tightening.

Despite its rapid growth in the recent past, the level of Slovakia’s public debt as a percentage of GDP was the seventh lowest within the European Union at the end of last year, according to the Finance Ministry’s Finance Policy Institute report released on June 30. At the end of 2009 public debt was 35.7 percent of GDP.

“The relative level of the public debt, as such, is not as alarming as is the pace of its growth in recent years,” Vladimír Vaňo, chief analyst with Volksbank, told The Slovak Spectator. “Hence the 2009 deficit level is unsustainable not only due to EMU [European Monetary Union] obligations, the limits of the EU [Maastricht] Stability and Growth Pact, but also due to risks it poses for Slovakia’s sovereign rating.”

Within the V4 countries, the Czech Republic has a lower debt to GDP ratio than Slovakia at 35.4 percent, while Hungary’s public debt ratio at the end of 2009 climbed to 78.3 percent.

Radovan Ďurana of the INESS economic think tank said that the best way to illustrate the condition of the state budget is to compare its conditions for the first six months of 2010 with the pre-crisis year of 2008 in Slovak crowns: this years’ tax revenues are lower by Sk17 billion while the spending is Sk60 billion higher than 2008, a development which unavoidably leads to a higher deficit.

At the same time Ďurana said the comparison illustrates that a takeoff in the economy and tax revenues returning to the levels of 2008 will not alone suffice to reach a balanced budget.

“The negative or stagnating development of tax revenues has been predictable and unfortunately the high deficit does not come as any surprise either since the outgoing government has ignored the need for fundamental cuts in public administration spending,” Ďurana told The Slovak Spectator.

Ďurana stated that actual spending has jumped by 28 percent year-on-year, by more than €2 billion, while budgeted expenses for the whole year were projected to increase by 15 percent. He added that it is difficult to analyse the exact reasons for the increased spending because the Finance Ministry has not published detailed information.

Vaňo noted that 2009 can be viewed as the year with the most serious post-war recession recorded in Europe.

“Being an extremely open economy, Slovakia followed the downturn in its major trading partners and consequently the recession-driven shortfall in budget revenues was the chief culprit of the 2009 deficit overshoot of 6.8 percent of GDP,” Vaňo told The Slovak Spectator. “Although there was a brief argument that drawing 2009 expenditures in line with the plan was part of counter-cyclical measures by the government, the true reason for lack of fiscal restraint last year was the pace and severity of the recession and its swift impact on revenues that was too fast to be matched with flexible spending cuts, especially ahead of the election.”

From this unfavourable deficit base for 2009, which had been first projected at 6.3 percent of GDP based on preliminary figures, the Slovak government pencilled in fiscal consolidation steps that would narrow the deficit to 5.5 percent in 2010, 4.2 percent in 2011 and a Maastricht-compliant 3 percent of GDP in 2012, Vaňo noted.

But as early as November 2009, when the 2010 budget was passed, observers were pointing towards significant risks of shortfalls on the revenue side, noting that as much as 23 percent of the budgeted revenues were to come from EU funds.

“In nominal terms the budget counted on tripling the volume of EU funds drawn year-on-year, from about €1 billion in 2009 up to almost €3 billion in 2010,” Vaňo stated. “Even taking into account the limitations of the administrative process associated with drawing EU funds, this projection was rather audacious.”

According to Vaňo, the more fundamental flaw in the revenue projection was associated with the likely nature of the macroeconomic recovery that Slovakia could expect after the deep decline of 2009: even though growth in unemployment is now stabilised, it will take a considerable time before any significant new job creation begins as companies with much lower than normal capacity utilisation are able to manage any growth in their business by achieving better productivity from their current, often leaner, workforce.

“This paradox of a jobless recovery is most bitterly felt in the 2010 revenues of municipalities – even though a majority of direct taxes from personal income is redistributed to towns and cities – which all of a sudden feel the recession punch after more than salient employment growth was boosting their revenues in the pre-2009 economy,” said Vaňo. “The lack of job creation can be felt also in the poor indirect tax revenues development in the central government budget.”

The state budget deficit for the first six months of 2010 has already amounted to 65 percent of the full-year budget, meaning that to meet the original full-year target would require that government expenditures not exceed revenues by more than €1.3 billion in the second half of the year, Vaňo said, adding that this could be possible only through timely and restrictive measures.

“Every long-term creation of deficit at a certain point will knock down the willingness of investors to lend money to a given country,” Ďurana said, adding the longer high deficits prevail, the harder a switchover to a normal level would be.

The biggest risk, according to Vaňo, is plain and simple: a country like Slovakia that increased its public debt from below 28 percent of GDP to over 40 percent in a matter of a few years might well see negative assessments from the international rating agencies unless the country demonstrates a credible fiscal consolidation plan.

“Rating risks imply worsening of the sovereign spread risk, i.e. more expensive refinancing of public debt,” Vaňo said. “Moreover rating warnings would not bode well for potential investors, especially in years when FDI inflows into the region will be much thinner than we are used to because European corporations are burdened with 24.5-percent excess capacities, more than during the recession of the early nineties.”

Economic observers have been busy assessing the likelihood that the incoming government will be able to push down the deficit, which instead of reaching the planned 5.5 percent of GDP might climb as high as 7 percent in 2010. They do not seem very optimistic.

“Considering the short time available and the need for systemic reforms to achieve considerable savings, I do not assume that the government will be able to fundamentally move the deficit by the end of the year,” Ďurana said. “However, we will evaluate it positively if the government succeeds in starting the process of adopting such changes and reforms.”

There are also opinions that the new government in the end will not have any other option but to hike taxes in order to improve public finances. Ďurana, however, advises against the government taking such a path.

“I disagree with this opinion; public funds are intensively wasted while the state has been taking on many functions that the free market, or eventually society itself, would be able to secure,” Ďurana said. “There are tremendous reserves if we build on the assumption that the state should fulfil mainly its basic functions and its redistributive policies should be focused only on the socially weaker groups, not the whole population.”

Vaňo predicts that expenditure cuts can be both technically tedious and politically difficult not only due to the need to restrain overall government outlays, but also because that with a governing coalition of four parties, each could intuitively oppose stark cuts in “their” ministries while pointing their fingers at other coalition partners.

“Nevertheless, experiences of fiscal consolidation in several countries point to deficit narrowing through a combination of both expenditure cuts and tax hikes,” Vaňo told The Slovak Spectator. “When it comes to the tax hikes, the indirect taxes such as VAT and excise taxes are usually those considered most frequently due both to their share of budget revenues and their relatively timely and predictable impact on revenues.

Mikloš has presented some proposals to make changes in the country’s legislation in order to keep the public finances under control.

Ďurana said he finds it positive when politicians are willing to institute legislative rules for managing taxpayers’ funds but he suggests that more beneficial than just quantitative limits on expenditure would be reforms in management approaches which could motivate even greater savings.

According to Vaňo, ideas like those floated by Mikloš are not new in the region and a constitutional public debt limit is in place in neighbouring Poland.

“It is certainly a worthwhile, medium-term reform that would increase the long-term credibility of the country,” Vaňo said.

But he was quick to add that it is not something that would address the imminent pressing need to narrow the budget deficit during the upcoming government’s term, noting that apart from the time necessary to implement constitutional reforms such as a public debt ceiling, the new governing coalition in Slovakia does not have a constitutional majority.

Vaňo pointed positively to the example of Chile, which accumulated budget surpluses during its boom years, to illustrate that what he calls fiscal sanity is not a matter of applying the letter of the law or using the constitution, but comes rather from responsible political leadership.

“After all, why is fiscal restraint, a more sober term for fiscal discipline, interpreted as politically harmful, especially in a CEE that is increasingly inclined towards populism among leadership on both sides of the political spectrum?” Vaňo asked.