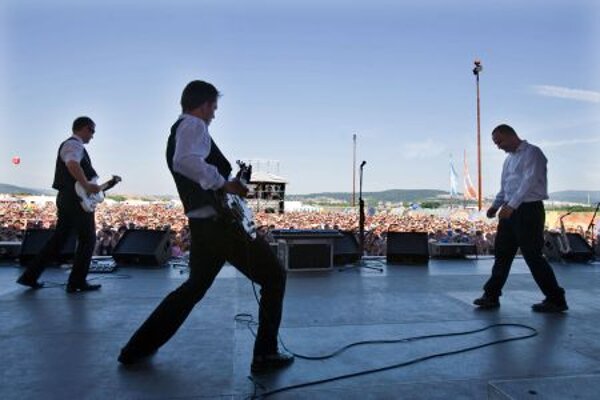 The festival – whose name, roughly translated, means contentment in Slovak and Czech – began on July 8 with a performance of Mozart’s Requiem by the State Philharmonic Orchestra from Košice accompanied by the Choir of St Cecilia from St Elizabeth’s Cathedral in Košice to commemorate the victims of the tragedy which marred last year’s event. Festival-goers Nikola Kapková and Martin Kašák were killed and dozens injured when a sudden storm brought down one of the main tents at the 2009 festival; a court later found that the tent had not been properly secured.

In spite of the sad memories, the festival offered its usual selection of big international acts, including Leftfield, Scissor Sisters, The Stranglers, Klaxons, Ian Brown, Juliette Lewis, José Gonzáles and Max Romeo, as well as Slovak artists and bands such as Jana Kirschner, Puding pani Elvisovej, Bez ladu a skladu, and Collegium Musicum.

One special feature of Pohoda is that, as well as rock and pop, it presents different musical genres like jazz, folk, dance, ethno and classical music. Apart from the introductory piece, the Slovak Chamber Orchestra of Bohdan Warchal dedicated their performance, Four Seasons by Vivaldi, to last year’s victims, and played on the Main Stage between 15:00 and 16:00 on July 10, the last day of festival. This was the exact time when the storm hit last year and the other stages fell silent for their performance.

Apart from music, the feast also offered ballet – Bolero and more, organised by soloist and former head of ballet at the Slovak National Theatre Mário Radačovský – and theatre performances, including one in Czech. Four books made their debut among readers at Pohoda, and discussions on fine art, society and politics enlivened the programme.

“We are moved. We had expectations, and I organised [the festival] this year mainly for the support [I felt] from people. The crucial thing is that the festival returned with the atmosphere it has always had. I even think it has become stronger, deeper,“ Kaščák told the SITA newswire. He added that he did not know whether the event would take place in Trenčín next year – the contract is always signed for just one year – adding that Piešťany airport might be the next venue if Trenčín is not confirmed. But he promised that, wherever it is held, “the show must go on” and that Pohoda will take place again in 2011.