SLOVAKIA’S newly-formed government, led by Iveta Radičová, is expected to pursue a policy of reducing tensions in domestic inter-ethnic relations as well as improving relations with the Hungarian government, observers say. Radičová’s first meeting with her Hungarian counterpart, Viktor Orbán, suggested she might be able to live up to these expectations – but the occasion was also used by Slovakia to set out other goals connected with its presidency of the central-European Visegrad Four (V4) grouping. 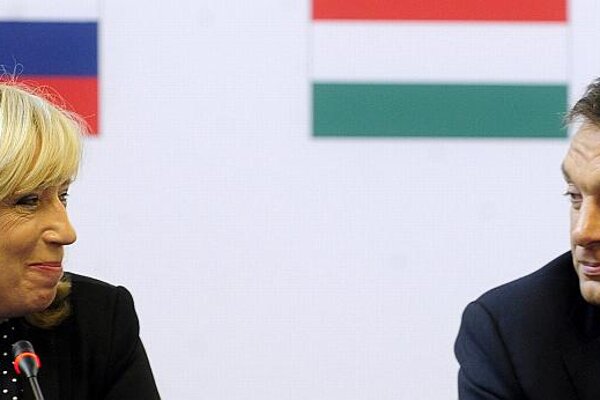 SLOVAKIA’S newly-formed government, led by Iveta Radičová, is expected to pursue a policy of reducing tensions in domestic inter-ethnic relations as well as improving relations with the Hungarian government, observers say. Radičová’s first meeting with her Hungarian counterpart, Viktor Orbán, suggested she might be able to live up to these expectations – but the occasion was also used by Slovakia to set out other goals connected with its presidency of the central-European Visegrad Four (V4) grouping.

Slovakia took over the rotating presidency of the V4 at a summit of the group’s prime ministers held in Budapest on July 20, with Radičová stating that during its presidency Slovakia will be seeking out issues that connect the four member countries – Slovakia, the Czech Republic, Poland and Hungary – and disregarding what separates them.

The prime ministers of all four countries accepted the programme of the Slovak presidency, with priorities including minimising the negative effects of the economic and financial crisis, building energy security, and intensifying cooperation within the EU. With regard to crafting the EU’s 2020 growth strategy, Radičová proposed forming a common V4 approach that will not be “planning, but a reform document”, the SITA newswire reported.

Among the other leaders, Czech Prime Minister Petr Nečas called for concrete targets, for instance in connection with energy security, while Hungarian Prime Minister Viktor Orbán noted that the aim of Hungary’s foreign policy is central European cooperation and without the Visegrad Group such cooperation would be impossible.

In the future, Orbán wants to introduce a system of cooperation based on the idea that Radičová advocated: “that problems should not separate, but unite”, SITA wrote.

Tomáš Strážay, an expert on Visegrad cooperation at the Slovak Foreign Policy Association, believes that the priorities of the Slovak presidency were voiced clearly during the prime-ministerial meeting, and thus the summit was not only about the formal passing on of the rotating presidency from Hungary to Slovakia.

Strážay noted that the presidency does not have to be just a formal position for the country at the head of the group for one year.

“It’s also a space for new initiatives and ideas to emerge, some of which can last much longer than the year-long presidency,” Strážay told The Slovak Spectator, adding that the 20th anniversary of the founding of the group will be celebrated in the second half of Slovakia’s presidency in early 2011.

“One of the main challenges that the V4 cooperation is facing presently is to create a more effective regional platform within the European Union (EU) that would have an added value for the EU itself and whose initiatives would be complementary to EU initiatives,” Strážay said.

The latest Budapest summit provided the first opportunity for the new prime ministers of Slovakia and Hungary to meet and talk in person about the issues that have divided the two countries and often caused tensions in their mutual relations.

“Relations between Slovakia and Hungary are improved,” Radičová said in her opening remarks at a news briefing following her bilateral meeting with Orbán, as quoted by the SITA newswire. According to her, the yelling over the Danube River is over and from their first meeting onwards the two leaders will always solve problems and misunderstandings between Slovakia and Hungary through personal meetings.

Radičová and Orbán agreed to restore the work of all the joint working commissions that deal with controversial issues as well as urgent problems that are common for the two countries, such as the effects of floods, unemployment and regional development projects. A joint commission should also soon be created to resolve the dual citizenship dispute between Slovakia and Hungary.

“It was a burning problem; it will not be a burning problem anymore,” Radičová said, as quoted by SITA. “There are solutions, reasonable solutions. Prime Minister Orbán knows the alternative solution; I did not have to tell him. We also know the laws they adopted. In spite of this, I said that we are ready to submit to the Slovak parliament an alternative solution, that the law they adopted would not be effective in the Slovak Republic if it is received in the wording as it was passed by [their] parliament.”

Radičová also invited Orbán to Slovakia to mark the 15th anniversary of the signing of the inter-state treaty between the two countries. Media reports suggested Orbán is likely to accept the invitation.

Strážay sees it as a positive thing that the meeting was organised and that it took place in a relaxed and friendly atmosphere.

“It serves as a source of hope for future meetings and for the future development of mutual relations between Slovakia and Hungary,” he said, while at the same time warning against excessive optimism.

“Two partners are needed for talks, and if we look at the political and personal history of Viktor Orbán and his party Fidesz, we can see numerous reverses and unexpected surprises in their past politics,” Strážay said. “Such developments cannot be ruled out in the future.”

However, Strážay believes that from the viewpoint of Visegrad cooperation the sometimes problematic bilateral relations between Slovakia and Hungary are not an obstacle for the functioning of the group and the fulfilment of its ambitions in the region and in the wider world.