THE NEW government is now preparing for another attempt to limit the immunity of MPs and judges. A proposal which was recently endorsed by the government could appear before the next session of parliament which starts on August 3, though it is not clear yet from statements by opposition MPs whether the proposal will gain their support. This would be essential if changes are to be made. 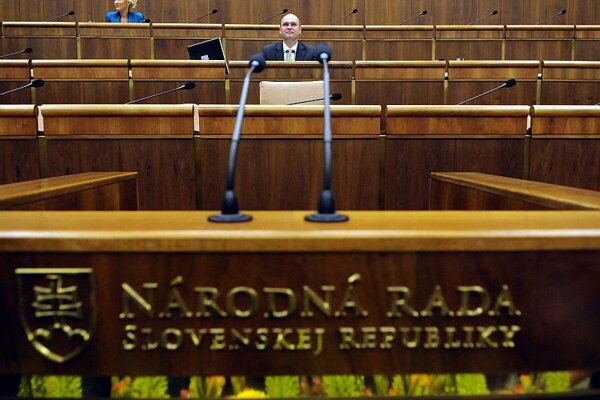 THE NEW government is now preparing for another attempt to limit the immunity of MPs and judges. A proposal which was recently endorsed by the government could appear before the next session of parliament which starts on August 3, though it is not clear yet from statements by opposition MPs whether the proposal will gain their support. This would be essential if changes are to be made.

The government approved a draft amendment to the constitution submitted by Prime Minister Iveta Radičová that aims to limit the immunity of MPs and judges as well as Slovakia’s general prosecutor. If the amendment is passed the new rules would become effective in November 2010.

“It’s the start of a new term and it’s a suitable time to set new rules for MPs’ behaviour,” said Radičová, as quoted by the SITA newswire.

“Immunity of MPs and judges is a historically-proven concept, the sense of which is to guarantee the largest possible freedom in political fights on parliamentary soil and to the security of judges when ruling on cases,” the prime minister wrote in the justification for the draft law. “It cannot protect MPs and judges from prosecution on issues that are not connected with their activities as MPs or judges.”

Following this line of reasoning, the new law proposes to limit MPs immunity only to voting and statements made in parliament and decision-making while in court for judges. It maintains the need for approval from parliament or from the Constitutional Court if an MP or a judge is to be detained, but eliminates parliament’s or the Court’s approval for prosecution.

The immunity of MPs and judges is governed by the constitution and can only be changed by a constitutional law which requires three-fifths of all MPs to vote in favour, a condition that will require the current ruling coalition to convince 11 opposition MPs to support the legislation.

Radičová has already announced that she is planning to discuss the draft law with the opposition parties.

“I see no reason why the interest in increasing the trustworthiness of parliamentary deputies and in increasing the trustworthiness of parliament itself, should be an obstacle to the votes of either coalition or opposition parties,” Radičová said, as quoted by SITA. “After all, the current opposition parties, mainly Smer, have officially, repeatedly and always claimed that it is in their interest to solve this sensitive problem and that they are positive about limiting the immunity of MPs.”

But the opposition parties have not shown unconditional enthusiasm for the draft proposal.

“We don’t understand the eagerness of the government since one of the coalition members proposed a referendum on this question which will take place in September,” said Silvia Glendová, the spokesperson of Smer.

“The government wants to have a tool in their hands to criminalise the opposition because they don’t know how to rule differently. It’s just another fraud on the citizens since it is clear that a constitutional majority is needed for such a change and nobody ever discussed this topic with Smer,” Glendová wrote in Smer’s statement.

With 11 opposition votes required and the other opposition party, the Slovak National Party (SNS), having only nine MPs, it is clear that the ruling coalition parties will need to fish for votes in Smer’s waters if the law is to be passed, especially considering that the SNS has generally spoken against limiting MPs’ immunity.

“It’s populism and theatre produced for the public,” SNS deputy chairman Rudolf Pučík said, as quoted by the TASR newswire, adding that he sees no reason to support further limits on immunity.

Although Pučík does not expect the SNS parliamentary caucus to support the legislation, SNS deputy chair Anna Belousovová spoke in a very different tone when addressing immunity limits and said she would support it. She said she would go even further and cancel immunity even for statements made in parliament, the Sme daily reported.

The attitude of Smer MPs on the matter is not clear. Smer’s deputy chair Dušan Čaplovič told the Sme daily that he sees no problem in limiting MPs’ immunity but might not support the legislation because of his reservations towards the way the ruling coalition has divided up posts in parliament. His colleague Renáta Zmajkovičová, the head of the parliamentary committee on incompatibility of functions, said she will vote in line with draft legislation that she had personally proposed to parliament in 2009, but then withdrew. It would have restricted immunity from criminal prosecution only to acts that occurred when MPs were conducting parliamentary activities – including trips to and from sessions of parliament.

While so far MPs and the political parties have limited themselves to brief comments on the proposed constitutional change, passionate discussion has emerged among judges.

The Slovak Union of Independent Judiciary (SÚNS) was the first organisation to react and on July 19 it issued a written statement in which it rejected any change in the limits to their immunity and called the proposal a tool for political purges in the judiciary. The Judicial Council, the top administrative body of the judiciary has also challenged Radičová’s attempt to limit judges’ immunity.

“The Constitutional Court of the Slovak Republic, which decides on issuing an approval on prosecution of judges, is the highest guarantor of the constitutionality, legality and objectivity of the whole process,” the Judicial Council’s statement reads. “So far it has never failed in such cases to act in line with the constitution.”

The Association of Judges of Slovakia stated that the proposal goes against the guarantees Slovakia provided to the EU during its accession talks as well as those embedded in an amendment to the constitution from 2001 which strengthened the immunity guarantees for the judiciary.

“The government is now trying to push the position of the judiciary to before this time [when the amendment was passed],” the head of the association, Dana Bystrianska, told public broadcaster Slovak Radio (SRo), adding that her association considers the proposal to be “an attempt to weaken the judiciary and to contest the independence of judges and courts.”

Justice Minister Lucia Žitňanská responded that the EU does not set an exact form of immunity for judges since there are no common binding rules and the question of immunity of MPs and judges is handled differently by member states, SRo reported.

The opinions of Slovak judges, however, do not seem to be uniform. Judges gathered within the initiative called For an Open Judiciary dismissed the worries voiced by SÚNS about political purges, saying that judges themselves, headed by the Judicial Council and the Supreme Court president, were attempting to cleanse the judiciary. This grouping of judges said there were at least 14 fabricated disciplinary proceedings against judges to support their claim.

“Responsible and decent judges don’t need protection through immunity for their actions not connected with their rulings,” reads the statement released by For an Open Judiciary. “These judges need to be protected rather from the abuse of power within the judiciary.”