NO MIRACLES are on offer from the government of Iveta Radičová this year when it comes to trimming Slovakia’s large public finance deficit that may reach 7.5 percent of GDP. The International Monetary Fund (IMF) does not expect that Slovakia can achieve any significant deficit reduction this year but strongly recommends that the country reduce the level of its deficit by 2.5 percent of GDP in 2011. 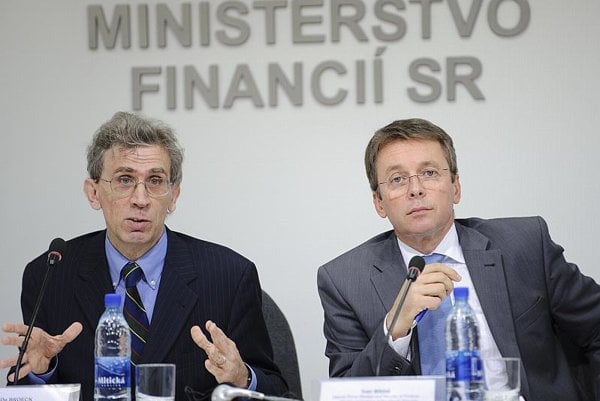 NO MIRACLES are on offer from the government of Iveta Radičová this year when it comes to trimming Slovakia’s large public finance deficit that may reach 7.5 percent of GDP. The International Monetary Fund (IMF) does not expect that Slovakia can achieve any significant deficit reduction this year but strongly recommends that the country reduce the level of its deficit by 2.5 percent of GDP in 2011.

Slovakia’s new finance minister, Ivan Mikloš, who returned to this position after a four-year gap, says the 2.5-percent reduction is doable and this is what his team is aiming for. What is not workable though, according to Mikloš, is the plan that his predecessor, Ján Počiatek, the finance master of the previous government of Robert Fico, left him: a deficit target of 5.5 percent for 2010 along with what Mikloš called “disintegrated public finances”.

“The predicted [5.5 percent] deficit is an illusion,” Mikloš, a nominee of the Slovak Democratic and Christian Union (SDKÚ), said. “The Finance Ministry under the leadership of Počiatek has already published [data showing] that the shortfall in tax and payroll tax [revenue] will be €1 billion deeper than they had assumed when designing the budget with a 5.5-percent deficit.”

Nevertheless, Počiatek left the Finance Ministry saying that the target set by the previous government remained realistic if the new government “practice what they preach”.

After concluding a ten-day mission to Slovakia on July 19, the IMF estimated the country’s deficit could climb to as high as 7 or 8 percent in 2010 and stated that consolidation of public finances is one of the greatest challenges facing the new Slovak government. The Radičová cabinet is facing the challenging task of squeezing the government deficit under 3 percent of GDP, the target set by the Maastricht Treaty, by 2013.

“This number, 8 percent, really proves that the new government is taking over disintegrated public finances,” Mikloš said on July 19, as quoted by the SITA newswire. “Just for illustration I would mention that Hungary expects a deficit this year of 3.8 percent while Greece is at 8.7 percent of GDP.”

Počiatek’s assessment of the health of Slovakia’s public budget was different, however. He said in early July, as he was leaving the Finance Ministry, that “we are not leaving the treasury empty”.

“I’ve accumulated €300 million in one account by putting together all the reserves we had and now they [the new government] can use it on whatever they want,” Počiatek said on July 7, after the government of Prime Minister Fico resigned following the loss of its majority in the June 12 parliamentary election.

Radovan Ďurana of the INESS economic think tank is inclined toward Mikloš’s interpretation of the status of Slovakia’s public finances.

“If Mikloš by ‘disintegrated finances’ means huge deficits reaching 50 percent of tax revenues, then we have to agree with him,” Ďurana told The Slovak Spectator. “It does not mean however that the cash flow between public institutions and ARDAL [the Debt and Liquidity Management Agency] would not be able to secure enough resources to finance the deficit, for now, of course.”

Počiatek has attributed the increased government deficit to the global economic downturn but economic observers suggest that while the crisis shares some of the blame, the sharply rising deficit cannot be ascribed entirely to that cause.

Eva Sadovská, an analyst with Poštová Banka, said that Počiatek’s assertion should more correctly state that the economic crisis deepened the public finance deficit, contending that when the Slovak economy was generating double-digit growth and few people were thinking about the possibility of an upcoming crisis, the government should have handled public finances more carefully and thoughtfully.

Ďurana commented that the crisis undoubtedly caused the significant drop in tax revenues, but added that the government’s inability to at least partially adjust its expenditures to the likely revenue available in 2010 was solely the responsibility of the past government and the ruling majority in parliament.

Sadovská agreed that in the midst of the crisis it would have been difficult to positively influence the level of tax revenues. She also said that higher spending during the downturn could be justified if those expenditures meaningfully supported the economy but she questioned whether the former government can properly claim to have made these kinds of expenditures over the recent past.

Mikloš has already announced his goal of decreasing the deficit by 2.5 percent of GDP in 2011, which given the deficit of 7 percent or more in 2010 will require a significant reduction in expenditures and a corollary increase in revenues.

Ďurana believes that if the deficit this year ends at 7.5 percent of GDP, which amounts to €4.9 billion, then next year it could be reduced to about 5 percent of GDP, or €3.5 billion. On this basis he says that the government must find €1.4 billion in revenue or expenditure cuts and he believes citizens could generate €0.7 billion of this deficit-cutting amount from higher consumption, higher employment and higher profitability by Slovak firms.

Ďurana said this means that about €0.7 billion must be ‘saved’ by the government, which he believes is possible if the state undertakes effective expenditure cuts, adding that the government must pass the necessary legislation this year so that it can begin seeing the benefits of such measures next year.

Sadovská said the 2.5-percent deficit-reduction goal for 2011 is very ambitious but believes it is doable. She commented that meeting this target would transmit a positive message to the international community and she urged the government to start as soon as possible to take the necessary steps.

“In order to achieve the ambitious consolidation of public finances, greater transparency in public procurement will not be enough,” Sadovská told The Slovak Spectator. “Other measures and reforms will be necessary.”

Increased tax revenues should not be overestimated, said Sadovská, because unemployment in Slovakia is dropping very slowly and the jobless rate will return to its pre-crisis level only in a couple of years.

Reports have surfaced that the new government may consider higher taxes but Sadovská cautioned that there is a risk that higher tax rates might result in lower government revenues.

Recently the National Bank of Slovakia (NBS) and Finance Minister Mikloš suggested that one potential measure could be spending caps which would function as a kind of barrier to prevent an overall increase in the level of government spending.

“The effectiveness of this measure would depend on the willingness to strictly keep to it, which, for example, does not work today in the case of programmed budgeting,” Ďurana said. “Spending caps present a type of mid-term obligation to consolidate spending. As such, the caps cannot cut spending but only suggest how much should be saved in a given year. If the will to respect these caps is missing their effect will be minimal.”

Regarding the possibility that there is no reduction in expenditure, Ďurana said that the government might take a status quo position and only look at how the growth of tax revenues and GDP will reduce the size of the deficit.

But Ďurana believes the quickest possible way to cut the deficit is to aggressively reduce the level of government spending, adding that boosting the effectiveness of public administration and reducing waste in redistributed public funds will have a positive effect on economic growth in the mid term.

In addition to a tighter belt in the area of wages for public administration employees and more efficient procurement of goods and services, Ďurana sees space to reduce the deficit by modifying currently mandatory transfers to individuals, firms or other organisations that draw funds from the state budget.

“Beginning with cuts in the bonuses going to construction saving schemes or child benefits up to cutting the support for less active cultural organisations, the space is huge and the amount of possible savings exceeds €1 billion,” Ďurana stated.

Mikloš said stronger economic growth will improve public finances. The International Monetary Fund has projected that Slovakia’s economy will grow by 4 percent this year in comparison to the 3.2 percent forecast last offered by the Finance Ministry.

Though Sadovská’s bank is keeping its estimate of GDP growth at 3.1 percent, she said that the IMF’s 4-percent projection is not overly exaggerated especially if demand from Slovakia’s main trading partners continues to revive.