AFTER much prodding from the European Union and a lengthy domestic game of blame, the government of Prime Minister Iveta Radičová has given the go ahead to Slovakia’s participation in the European financial safety net, but both Radičová and Finance Minister Ivan Mikloš were making sure that their reservations to the programme were nevertheless clearly heard in Brussels. 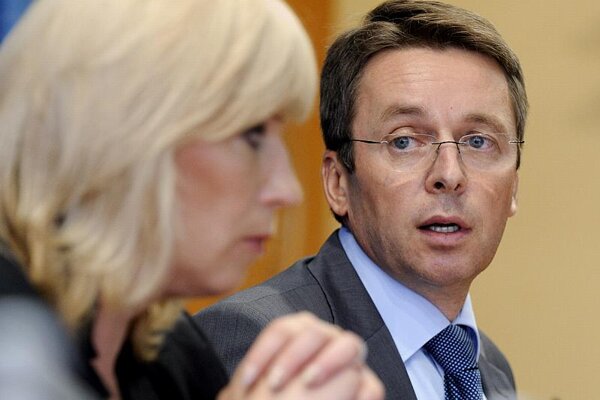 AFTER much prodding from the European Union and a lengthy domestic game of blame, the government of Prime Minister Iveta Radičová has given the go ahead to Slovakia’s participation in the European financial safety net, but both Radičová and Finance Minister Ivan Mikloš were making sure that their reservations to the programme were nevertheless clearly heard in Brussels.

The Slovak government’s July 15 ‘yes’ must now be approved by the country’s 150-member parliament in which the ruling coalition holds a narrow majority. But by the cabinet’s decision, the Radičová government has cleared the way for the EU to launch the European Financial Stabilisation Facility (EFSF).

“We want to serve as an example of making principled decisions and keeping to the rules of the game,” Radičová said, adding that this is why the government decided to support a political declaration made by the previous government in May.

At the same time the government adopted a statement specifying terms under which Slovakia will participate in the mammoth €750-billion programme to ensure financial stability in the eurozone. The statement said Slovakia will join in concrete support for another country only if the European Union beefs up the Stability and Growth Pact, a major bond by eurozone countries to protect the stability of the European Monetary Union, along with better rules for its application and enforceability. Slovakia also called for a clear mechanism for managing the insolvency of a country which had undertaken irresponsible budgetary policies, the SITA newswire wrote.

Slovakia will not share any of the financial costs of the first multi-billion rescue deal for Greece, as the government recommended that parliament reject any additional codicils to the original agreement signed by the previous government that would be required if Slovakia was to contribute any cash to the Greek loan deal.

Mikloš explained that the government’s “yes” to the framework agreement does not mean that Slovakia will necessarily provide cash to a troubled country since any eventual disbursement of funds is conditioned upon further agreement by all the participating countries.

Former Prime Minister Robert Fico, of the largest opposition party Smer, quickly commented that Radičová and her coalition government “have completed the deception of its voters” saying that before the parliamentary election the then-opposition parties stated they would not support the EFSF.

“Today they have done so, while no one and nothing obliged them [the government] to do so,” Fico said on July 15, as quoted by SITA.

Two of the ruling coalition parties, the Slovak Democratic and Christian Union (SDKÚ) and Freedom and Solidarity (SaS) expressed negative opinions about the loan for Greece and Slovakia’s involvement in the stabilisation facility from their very inception. On the eve of the cabinet’s decision, the four parties of the ruling coalition, SDKÚ, SaS, the Christian Democratic Movement (KDH) and Most-Híd, met and decided to approve participation in the programme.

SaS head Richard Sulík said that even though his party had a contrary opinion on the issue he understood the political circumstances and said his party would vote to approve adding Slovakia’s signature to the agreement.

Meanwhile, Mikloš said in an interview with the Austrian Der Standard daily that Slovakia will not agree with stretching the EFSF beyond more than three years.

According to Mikloš, three years is sufficient time for those governments with deficit troubles to undergo remedial actions.

“The EFSF should not become an unlimited tool to support fiscal irresponsibility,” Karpiš told The Slovak Spectator.

Over the past couple of weeks a tug of war has raged between the incoming and the outgoing governments: former PM Fico quickly threw the ball to Radičová after he was not able to form a government, suggesting that approval of the European programme was already Radičová’s responsibility even though she was not appointed prime minister until July 8. She insisted that before then Slovakia’s formal yes or no, which was supposed to come before July 1, was fully within the power of Fico’s government, which had earlier inked the deal.

The EFSF plan was developed in response to EU concerns about the financial stability of the eurozone, which has been shaken by Greece’s debt woes and concerns about the financial condition of several other eurozone countries. In early May eurozone finance ministers, including Slovakia’s finance minister at the time, Ján Počiatek, agreed to a multi-billion rescue loan to Greece, with Slovakia expected to contribute €800 million.

Slovakia’s share of the costs in establishing the EFSF will be €4.4 billion. Mikloš stated that Počiatek and the previous government failed to negotiate a fair deal for Slovakia.

“If Slovakia is supposed to contribute 2.3 times more in terms of GDP-ratio than the wealthiest EU country, Luxembourg, then it’s evident that the conditions have been negotiated poorly,” Mikloš said, as quoted by the TASR newswire.

However, Mikloš said the new government could no longer seek to negotiate these contributions as the breakdown had already been approved by the parliaments of other EU member states.

Radičová and Mikloš visited Brussels on July 13 to speak with EU officials, including European Council President Herman Van Rompuy, about the safety net programme and Slovakia’s participation in it. They had hoped to secure better conditions but were told directly that they were no longer negotiable.

European Commission President José Manuel Barroso said after his meeting with Radičová that solidarity within the EU works in both directions.

Martin Bútora of the Institute for Public Affairs (IVO) think tank said that Slovakia found itself in a strange situation during the public discourse over the EFSF.

“The government of Robert Fico agreed that we would support this concept, but without any active participation by Finance Minister Počiatek or by advisers to the prime minister or Počiatek in the discussions as this European policy was being formed,” Bútora told a press conference. “We accepted it even though it was formed without active Slovak participation.”

Bútora said that for this reason it was appropriate that the new prime minister and finance minister went to Brussels and reviewed the details of the agreement as well as its political context.