SLOVAKIA is one of the 30 countries that will send a Young Ambassador to the Youth Olympic Games 2010 in Singapore which will take place between August 14 and 26. The Slovak Young Ambassador is skeet-shooting champion Danka Barteková, who holds one world record in her sport and has won numerous medals in world and European championships. She also represented Slovakia in the 2008 Olympics in Beijing. These are the first Youth Olympic Games ever held and The Slovak Spectator asked about her role in the Youth Olympics and her view on Olympic values. 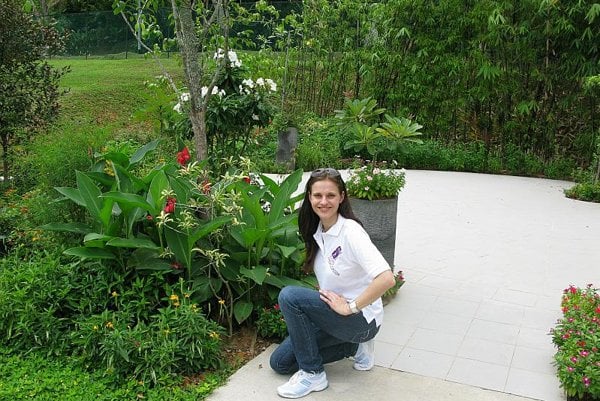 SLOVAKIA is one of the 30 countries that will send a Young Ambassador to the Youth Olympic Games 2010 in Singapore which will take place between August 14 and 26. The Slovak Young Ambassador is skeet-shooting champion Danka Barteková, who holds one world record in her sport and has won numerous medals in world and European championships. She also represented Slovakia in the 2008 Olympics in Beijing. These are the first Youth Olympic Games ever held and The Slovak Spectator asked about her role in the Youth Olympics and her view on Olympic values.

The Slovak Spectator (TSS): How did you happen to start working for the Slovak Olympic Committee (SOV)?

Danka Barteková (DB): During the games in Beijing as well the previously-held Universiade in Bangkok in 2007 I met people from SOV and suggested that I would be interested in working with them in the future. So, when the initial Youth Olympic Games (YOG) was announced the general secretary of SOV, Jozef Liba, contacted me and asked me if I was interested in becoming a candidate to be Slovakia’s Young Ambassador to the games. I said I would definitely be interested if I could combine the work for SOV with my other obligations. Then things moved quickly: I was nominated for the post and in March this year I travelled for a week-long seminar with the other Young Ambassadors in Singapore.

TSS: Does every country have an ambassador at YOG?

DB: No, the International Olympic Committee decided to organise this event to have a larger focus than just sport and to add elements of education and culture into the mix. Since this was a new idea, they needed people who could spread the idea and lure participants who would be interested in taking part in educational and cultural activities too as well as the athletic competitions. Only 30 countries, including Slovakia, were invited to send Young Ambassadors to Singapore. Slovakia received this honour because over the years it has placed great emphasis on youth sport with annual festivals for young athletes at all levels in regional and village competitions.

It is because of such activities that Slovakia was recognised for promoting children’s sporting programmes along with countries like Oman, South Africa, the US, the UK, China and others.

TSS: What will be your job during the games?

DB: I will assist our participants. So far 15 have qualified and two more are a possibility. They are mainly track and field athletes, swimmers, and tennis players. We will meet before the games so I can prepare them for what will await them in Singapore. During the games I will be their guide, also helping out organisationally, offering an extra pair of hands for the Slovak Olympic team.

At the moment, I communicate with the competitors mainly through Facebook, including fan pages and a group I have created, OH mladeze Singapur 2010, where I insert videos, texts, and where I also plan to include the profiles of established Slovak athletes.

TSS: How many participants will be at the games and how are they selected?

DB: Altogether there will be about 3,600 participants, most of them ranging in age from 14 to 18 years. They will come from 205 countries from around the world, so it’s going to be a diverse and colourful group. While at the regular Olympic Games there is competition in about 50 sports, in Singapore we will have only 26 so it’s a smaller version of the games in this sense.

Singapore got the chance to organise the first-ever YOG, and was given preference over Moscow and some other big cities that applied. It is a comparatively small city. Since they are aware that they are not on anybody’s list to host the ‘big’ Olympic Games, they have put a lot of energy into organising this ‘small’ Olympics. A lot of money has gone into the preparations, and I expect it to be quite a grand event.

TSS: You say Singapore’s chances to organise the Olympics are low and so are Slovakia’s. Do you think that Slovakia should put in a bid to host the youth games?

DB: In fact I’ve heard that some of the athletic fields in Singapore are no better than the standard school facilities, nothing special. Maybe Slovakia does have the potential to organise YOG, but I cannot imagine that our country would be able to accommodate the thousands of athletes and officials that would come to the games. That would require huge investments by any host country.

TSS: Could you describe the cultural and educational programme?

DB: It’s a programme organised for the participants to take part in activities when they are not engaged in training or competing. Unlike at the ‘big’ Olympics, all participants at YOG will be required to spend the full 12 days of the games in Singapore. No championships or world cups will take place at this time so they will be free from other obligations. Even our shooting federation has adjusted the dates of its world championship to accommodate these games.

The president of the International Olympic Committee, Jacques Rogge, believes in the noble idea that the Olympic education of athletes should begin early. At the moment, the average age of competitors at their first Olympics is 23, and Rogge wants young athletes to be ‘infected’ with the Olympic values – perfection, friendship and respect – at an earlier age.

The more than 50 activities of the cultural and educational programme are designed in the spirit of these values. They are divided into seven formats. One of them, for example, is the champion chat, which includes debates and meetings with distinguished athletes, the so-called role models. People such as Sergey Bubka, Alexander Popov and Tony Estranget will be available to give advice and chat with the participants. The top YOG ambassadors are Michael Phelps and Yelena Isimbayeva.

Apart from that will be experience-oriented activities of discovery.

The aim of the programme is to not only develop a sense of cooperation and team spirit in the young athletes, but also to allow them to get to know each other, to encourage them to overcome cultural and communication barriers and to experience Singapore and enjoy it with new friends. I have missed that experience by seven years so I’m trying now to communicate to the kids that they are lucky and they should make the most of this opportunity. I find that while the participants are enthusiastic, the coaches tend to be sceptical.

TSS: What do the coaches see as a problem?

DB: I usually encounter problems in three areas. One is the language barrier, because not all young athletes have knowledge of English. However, there will be translations of all materials into six languages and I will be around to help out with my English as well.

Another problem is the timing of the activities. While some of the participants will have their competitions at the beginning of the event and will have plenty of free time for the daylong trips and the experience activities afterwards, others will compete only at the end of the games and the truth is, that some of the extra-curricular events could be rather demanding, and I wouldn’t recommend them before competitions. However, there will also be a lot of activities right in the Olympic village, and it should be enough for the athletes to show up and get a taste of the activity or a workshop.

The last concern is security. I can say that the Olympic committee promises maximum security and that everything will take place under the supervision of experts.

But with all the extra events, I will have to use my persuasive skills on the coaches, who of course want the kids to focus on their performance and not what they see as ‘fiddle-faddle’.

TSS: Which is perhaps understandable from their point of view…?

DB: Certainly, whether we like it or not, the extra events will distract from the athletic performance. On the other hand, both these elements are part of these games. The sceptics say that in that case it should be called the Olympic festival not the Olympic Games, because the games are about perfection and performance rather than fun. But I believe the Olympic idea is wider and much nobler. And the kids should learn that too. A young athlete will come back home to Slovakia and tell stories about his cooperation with a swimmer from Zimbabwe, and then about how he met a nice Arabic tennis player and how they managed to communicate without problems.

One of the formats of the cultural and educational programme is called the World Culture Village. Within that, there will be 205 booths located in the heart of the YOG village, featuring all 205 participating National Olympic Committees, enabling young people to encounter other cultures, races and religions. The ideals are lofty so the only thing left is to get the athletes and their coaches to cooperate.

TSS: You have been an Olympic participant yourself. What does the spirit of the Olympics mean for you personally?

DB: I have taken part in the Olympics only once so far, and if London comes, I will experience it differently for sure. I didn’t really enjoy Beijing; I was focused on my performance. That will be important also in London. But I plan to stay there even after my competition and enjoy it all over again – eating in the dining room with 10,000 athletes from everywhere in the world, in the mixture of various colours of jogging suits, for instance.

Olympionism is a way of life. In sports, it’s important to achieve one’s goals and ambitions, but you cannot just go for high scores and fast times. You have to love what you do as well. YOG has helped to change my attitude.

TSS: What about your own competitive plans for the near future?

DB: I will be leaving for the European Championships in Russia on June 29 [note: she has won the championship in her category] and then I’m going to Munich for the World Championship. This year Munich is a key event for us, because the three medal-winners will also get placements for the 2012 Olympics in London. It should be very festive, even Jacques Rogge promised to come.

TSS: So you’re expecting a placement…

DB: I’m doing everything I can to get it. In my sport it’s win or lose but I feel I’m on top of my powers and all my hopes are laid on Munich. Next year we have four world cups in a row and that will be tough, so it would be good to get the Olympic placement before that.