Radicalism takes a back seat to deficit reduction

THE GOVERNMENT of Prime Minister Iveta Radičová is not likely to go down as a radical reformer if its programme statement for the next four years is anything to go by. Some previously heralded changes such as unification of value added tax rates, an increase in the retirement age and the sale of some strategic enterprises to foreign investors will remain only visions if the new centre-right government moves strictly in line with the programme it presented to parliament in early August. 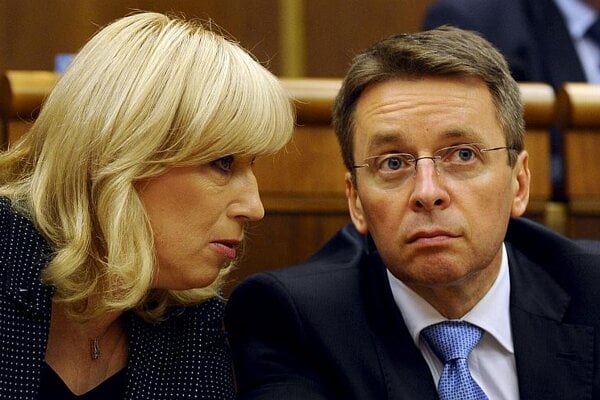 THE GOVERNMENT of Prime Minister Iveta Radičová is not likely to go down as a radical reformer if its programme statement for the next four years is anything to go by. Some previously heralded changes such as unification of value added tax rates, an increase in the retirement age and the sale of some strategic enterprises to foreign investors will remain only visions if the new centre-right government moves strictly in line with the programme it presented to parliament in early August.

Instead, the government is promising a slimmer public-finance deficit, a healthier business environment, a more active civil society, more corruption-sensitive political and public life, better access to justice, enough jobs to reduce social risks, an innovative society and access to quality health care. This is how Radičová summed up the priorities of her government when appealing for the support of parliament for the programme on August 3.

While Radičová is able to rely on the support of the ruling coalition deputies, the leader of the largest party in parliament, Smer, and thus the de facto head of the opposition, Robert Fico, said that he does not believe a word from Radičová and called the programme “untrustworthy". Fico has also said that the current government has picked the path of deregulation, privatisation, liberalisation and weakening what he referred to as “the socially-oriented state", something he professed to be pursuing during his time in office.

According to the former prime minister, the new government’s programme proves that a real rightist administration has emerged.

“No attempt to wrap the programme statement into a social scarf will change anything about that,” Fico said, dubbing the programme a general swindle of the voters.


Will the deficit be reduced?

Radičová and her Finance Minister Ivan Mikloš set out their goal of reducing the public- finance deficit to less than 3 percent of GDP from 7 percent, the estimated deficit for 2010, by 2013. Mikloš also said, as quoted by the Sme daily, that public finances would undergo a major healing process in 2011, and he promised to put more concrete proposals on the table by late August or early September.

However, unification of the value added tax rate at 19 percent, which Mikloš had advocated as part of the cuts required, did not make it into the programme statement. The unification would have cancelled the lower 10-percent rate for books and medicaments and a more recently introduced 6-percent rate for agricultural products sold from farm premises direct to end consumers. Radičová said that her government would not increase taxes. The government said that its priority is to maintain a simple, neutral and effective tax system.

Meanwhile, observers suggested that the government should have been more aggressive in tightening the belts of state bureaucrats or even parliamentary deputies, who receive tax-free bonuses in addition to their deputies’ salaries to cover expenses linked to the performance of their jobs.

According to Sme, Mikloš has been toying with the idea of taxing these payments. He also aspires to cut government departments’ regular expenses by 10 percent or trim the paychecks of state employees, except those of teachers, by 10 percent.

The government is also planning a reform of the system of contributions to the social security system, which might result in some self-employed and businesspeople paying higher payroll taxes.

Labour Minister Jozef Mihál, for example, said he plans to cancel contribution or payroll-tax exemptions, suggesting that payroll taxes should be paid also on severance payments or long-service bonuses paid to employees. Currently these payments are taxed but no social insurance contributions are paid on them.

Despite the announcements, Fico expressed doubts about Mikloš’ effort to reduce the public-finance deficit by €1.7 billion, suggesting that he has not been able to identify any specific proposals in the government’s programme that will achieve this goal. Fico said the implication is that the state of the public finances is either not as bad as the new government has been saying, or that the Radičová team simply does not know what to do.

Meanwhile, Mikloš said that the government will have to somehow mend the huge shortfall in income tax collection. Municipalities, which depend on income tax revenues as their main source of funds, estimate that they may need a cash injection of up to €141 million to compensate for the shortfall. In addition, the state will have to pour about €200 million into the state-owned railways system, €30 million into the coffers of health insurers and about €70 million might have to be spent propping up social security provider Sociálna Poisťovňa.

Like almost every post-1989 government in Slovakia, the Radičová government has also included in its programme the aim of completing a cross-country high-quality road connection to link the capital Bratislava with the main eastern city of Košice by 2014, though it says this might not necessarily consist entirely of highways. Transport Minister Ján Figeľ has confirmed that he plans to continue building roads via public-private partnership (PPP) projects.

“I want to have them as one of the pillars of road network construction,” Figeľ said, as quoted by the Sme daily on August 3, adding that these will be combined with EU financing and funds from the private second pension pillar.

The Radičová government has also pledged to scrap a rule imposed by the Fico government on private health insurers which prevented them from making profits (any excess had to be returned to the healthcare system).

Tougher times might also come for the so-called social enterprises, the pet projects of former labour minister Viera Tomanová, since the new government plans to take a closer look at their operation and might completely scrap them. The eight pilot companies, fed by European cash and intended to provide opportunities for the socially disadvantaged, have come in for heavy criticism over what the local media have labelled suspicions of cronyism.

Businesses upbeat, but had hoped for more

The Business Alliance of Slovakia (PAS) welcomed the government’s commitment to fight corruption, improve conditions within the judiciary and ease the administrative burden on businesses. The alliance suggested that these areas have long been among those most frequently criticised by businesses.

“The need for reforms in the business environment is even greater, since the quality of conditions for doing business have significantly deteriorated over the past years and businesses are still trying to tackle the negative impacts of the economic crisis,” read a PAS statement.

Yet the business alliance would have liked to see some more concrete proposals included in the programme statement to reduce the public-finance deficit, and also proposals addressing the unsustainable conditions of the first pension pillar, the pay-as-you-go system. PAS suggested that the government seems reluctant to make unpopular but necessary changes to the social insurance and tax systems.

PAS warned that a lack of effective measures to improve the public finances might have a negative impact on the business environment, the creation of jobs and the quality of life of citizens.

It suggests that Slovakia should adopt savings measures similar to those already planned by Spain and the Czech Republic in 2010.

However, another employers’ association, the National Union of Employers (RÚZ), expressed satisfaction with the programme, saying it will ensure that Slovakia rides out the crisis and that new jobs are created, resulting in better living standards. RÚZ President Marián Jusko stressed that measures need to be taken to make the labour market more flexible.