THE DEBATE in parliament over the government programme was lengthy and marked by personal invective, with the opposition parties showing very little sympathy for the objectives that the Radičová administration has promised to pursue over the next four years. The combative atmosphere in parliament became apparent immediately after Prime Minister Iveta Radičová made her speech on August 3 seeking approval for the official programme of her government. 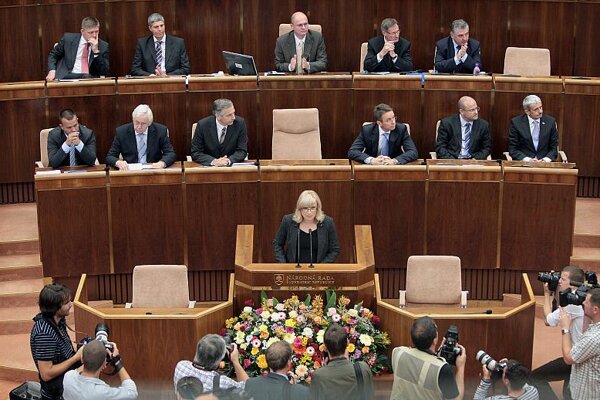 THE DEBATE in parliament over the government programme was lengthy and marked by personal invective, with the opposition parties showing very little sympathy for the objectives that the Radičová administration has promised to pursue over the next four years. The combative atmosphere in parliament became apparent immediately after Prime Minister Iveta Radičová made her speech on August 3 seeking approval for the official programme of her government.

Radičová, whose government is now geared up to reverse some of the legislation passed by the previous government, led by Robert Fico, promised zero tolerance for corruption and steps that will renew citizens’ trust in the government.

“Crooks cannot hide behind the name of a large multinational company or a parliamentary seat,” Radičová said in her speech. “They will be pushed where they deserve to be, to the margin of society or eventually to jail.”

Fico, the leader of Smer, the largest opposition party, responded that his party would be willing to support those policies of the Radičová government that responded to the impacts of the global economic downturn, explaining that parties need to take unified action in this area.

“Here we do offer a helping hand,” Fico said, adding that he would in no way assist in what he called the criminalisation of the opposition, the sale of state property or the lowering of social standards.

Fico said he considers the government programme “untrustworthy” and called on the government to openly admit its intention to privatise state-run companies such as railway cargo transporter Cargo Slovakia and Bratislava Airport.

The parliamentary debate continued after The Slovak Spectator went to print late on August 5, with a final vote not expected to take place until August 6 or even August 9.

The government of Radičová is promising, among other things, to amend the controversial Press Code and reduce the privileges of judges and MPs, in particular to limit deputies’ immunity from prosecution to statements they make in parliament.

More transparency in public procurement, with preference given to public tenders over directly assigned state orders, is also on the agenda of the Radičová government, along with moves to strengthen the independence of national cultural institutions from political interference. The government intends to scrap the so-called concessionaire fees paid by users of electricity to the public broadcasters Slovak Television (STV) and Slovak Radio (SRo). The privatisation of the state-owned newswire TASR also made it into the programme.

In the area of education, the government plans to make one year of kindergarten mandatory, with the possibility of alternative solutions for children who show the potential to handle elementary school without pre-schooling activities.

The Radičová team faces some tough challenges in the sphere of the judiciary, where it wants to trim the authority of the Supreme Court president, and stop the officeholder from simultaneously chairing the Judicial Council.

As for foreign policy, the government says it is committed to improving relations with Slovakia’s southern neighbour Hungary. The Slovak-Hungarian relationship has deteriorated over the past four years, among other reasons because of the presence of the anti-Hungarian Slovak National Party (SNS) in the last government.

On August 4, SNS deputy chairwoman Anna Belousovová said that government programme “devastates” Slovakia’s national-state interests and that her party would not vote for it. Belousovová objected to what she said was the insufficient frequency with which the word “Slovak” appeared in the document, according to the TASR newswire.

Yet Igor Matovič, of the Ordinary People group within the Freedom and Solidarity (SaS) party, challenged her argument, stating that that the word “Slovak” actually appears 391 times in just the first 27 pages of the programme. He accused her of publicly lying. In return Belousovová called Matovič a political speculator. Their exchange of opinions was among the sharpest during the debate.

In another slanging match during the debate, Fico called Speaker Richard Sulík, leader of SaS, a disgrace to his post (the second highest in Slovakia’s constitutional hierarchy) in reaction to Sulík’s speech in which he described the 2006-10 Fico government as an “era of darkness”.

Sulík said that the only project that the Fico government started and also finished on its own was the collection of the highway toll tender. He was referring to a massive tender to introduce an electronic toll collection system on Slovakia’s highways. It was the subject of numerous complaints and appeals during the selection process and was eventually awarded to the highest-price bidder after all the others, who had bid as much as €200 million less, were disqualified.

According to Sulík, the adoption of the euro in 2009 and Slovakia’s membership of the Schengen zone in 2007 were projects started by the governments of Mikuláš Dzurinda and only wrapped up by the Fico team, SITA wrote.

Fico responded that he expected the speech of a statesman but instead found Sulík unprepared and “speaking helter-skelter”.