THE OPENING of a new pedestrian zone in Čadca district was made more attractive by a competition of historical vehicles, the Beskyd Rallye. 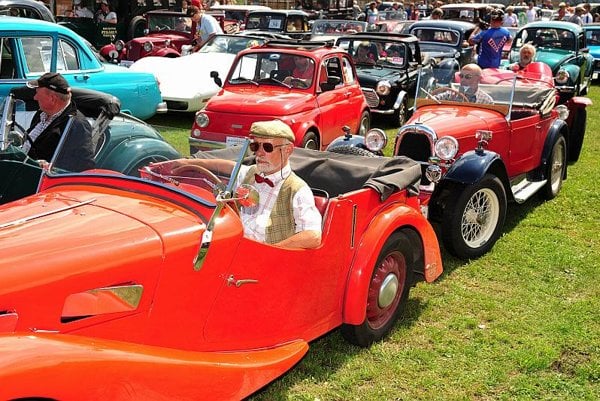 An eclectic collection of vintage cars lined up for the Beskyd Rallye. (Source: TASR)
Font size:A-|A+

THE OPENING of a new pedestrian zone in Čadca district was made more attractive by a competition of historical vehicles, the Beskyd Rallye.

The rally's 13th annual event took place in Turzovka on July 30 and 31. "Almost 100 cars - veterans - showed in their full beauty, there was a lot to admire here. Cars from the beginning of the 20th century until the recent socialist past paraded here,'' Turzovka Town Office Head Kamil Kobolka told the SITA newswire. He added that the main organisers were the Turzovský Veterán Klub and the town of Turzovka, who were also helped by the Beskydy Euro-region. As a tribute to this anniversary, the route of the rally went through the three countries covered by Beskydy: Slovakia, the Czech Republic, and Poland.

Part of the parade was the announcement of The Most Beautiful Car and the Most Beautiful Motorbike. “Jiří Kratochvíl with the automobile Panhard Levarsson dating back to 1912 and Pavol Marušák with a Tatra 13 manufactured in 1925 – which the Turzovka inhabitants remember from the times of its full operation at the small bakery of the Kachaňák family – won the competition,“ Kobolka said.

Ninety historical vehicles (most produced before WWII) stopped on July 31 in the centre of Turzovka, during the Slovak-Czech leg of the rally. The head of the race, Václav Dostálek, told the TASR newswire that the Slovak-Polish leg on Friday led from the Czech municipality of Bílá through Krásno nad Kysucou and Park Snow Veľká Rača, Oščadnica, in Slovakia; Rajcza and Skalité, in Poland; and then back to Bílá.

The technical manager of the race, Martin Dlhopolček, added that Turzovka was able to see cars produced from 1901 to 1997, including several unique vehicles that were manufactured only until 1920.

And those who went to watch the race could also see a review of the Czechoslovak-produced brands Aero, Tatra, Praga and Walter – effectively, an overview of a century of car production.

The Turzovka Veterán Klub was represented by seven vehicles made before 1945, and several newer ones, Dlhopolček added. Turzovka Mayor Miroslav Rejda praised the town – inhabitants as well as visitors – who attended the event. He also noted that the parade of historical vehicles was connected with the opening of a pedestrian zone, so it represented a symbiosis of the old and the new.