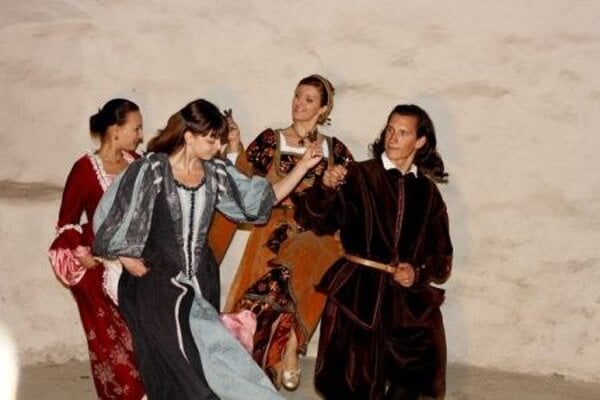 Bratislava
JAZZ LIVE: Each Wednesday in August an open-air jazz concert is being held in the old town; on August 18, Slovak group Adriena Bartošová & Friends will showcase their interpretation of this musical genre.
Starts: August 18, 20:00; St. John of Nepomuk Courtyard in the Primate’s Palace. Admission: €6-€7. Tel: 02/5935-6650; www.bkis.sk.

Bratislava
HISTORICAL FENCING AND LIVE MUSIC: Tovarišstvo starých bojových umení a remesiel (The Guild of Old Martial Arts and Crafts) + Vrbovské vŕby (Willow-trees from Vrbové) band – The first group which is the oldest Slovak association pursuing historical martial arts, fencing and crafts, joined forces with the second, a music band which was co-founded by Andrej Budislav Jobus, and includes his brother Rastislav, plus Peter Klčo. It styles itself an “industrial folklore” group and brings a mixture of true-to-life historical shows using ancient, as well as home-made, instruments. Together, they can evoke a special atmosphere reminding of ancient times.
Starts: August 15, 16:00-19:00; square in the Eurovea complex. Admission: free. More info: www.bkis.sk.

Bratislava
EXHIBITION: Socha a objekt XV / Statue and Object XV – The 15th year of this international exhibition showcases 60 artists from 10 countries (including Norway, the Netherlands, Denmark, Austria, the Czech Republic, Hungary, Poland, the USA, and Brazil) whose works are displayed in the open air, contextualised in their environment, on Hviezdoslavovo Square, in the University Library and also in the Klarisky/Clarissen-Monastery courtyard.
Open: Mon-Fri 10:00-19:00 until August 28; Klariská 5. Admission: free. More info: www.sao.galeria-z.sk.

Bratislava
EXHIBITION
The exhibition of Ildikó Pálová in the Galéria Mesta Bratislavy / Bratislava City Gallery (GMB) brings together works by an author who is hard to position, label or analyse. The artworks on display represent her complex inner life, reflect her wildly colourful experiences and the way she perceives and processes them. Until August 22, the exhibition can be seen in the Pálffy Palace, Panská 19, on Tuesdays to Sundays from 11:00 to 18:00.

Trnava
FOLKLORE FESTIVAL: Trnavská brána / The Trnava Gate – This folklore festival enters its 9th year in 2010 with more than 30 folklore ensembles (including ones from the Czech Republic, Poland, Hungary, Lithuania and Taiwan) appearing over three days.
Starts: August 20-22; Trinity Square/Trojičné námestie. Admission: free, except for the staging of Carmen in the City Amphitheatre. Tel: 033/3236-440, www.trnava.sk.

Banská Bystrica
FIRE SHOW: Spectaculum Ignis - the Theatre of Fire – Dozens of theatre actors, dancers, drummers and avant-garde artists will perform into the late hours in the city centre. In the afternoon, blacksmith artists will show their craft as well as fencers, and in the evening, Oriental dancers will lure people to enjoy the show.
Starts: August 21, 15:00-22:00; SNP Square. Admission: free. Tel: 048/4156-051; www.pkobb.sk.

Banská Štiavnica
CASTLE FESTIVAL: The 8th year of the traditional Hradovánky na Starom zámku (a wordplay hinting a combination of castle and enjoyment at the Old Castle) event in Banská Štiavnica seeks to lure visitors to night tours of the town’s Old Castle, theatre performances, fencing tournaments, and even dance lessons so that they can indulge all their senses on one weekend in August (21) and one in September (11) at 20:30, 21:00, 21:30 and 22:00. Visitors are encouraged to book tickets in advance by calling 045/6949-472 or visiting geopark@muzeumbs.sk.