ANOTHER wave of floods hit some regions of central Slovakia on Sunday, August 15. A so-called thousand-year flood filled the streams of the Upper Nitra region and inundated parts of Handlová and Prievidza and their surrounding villages, reaching a depth of 3 metres in some places. 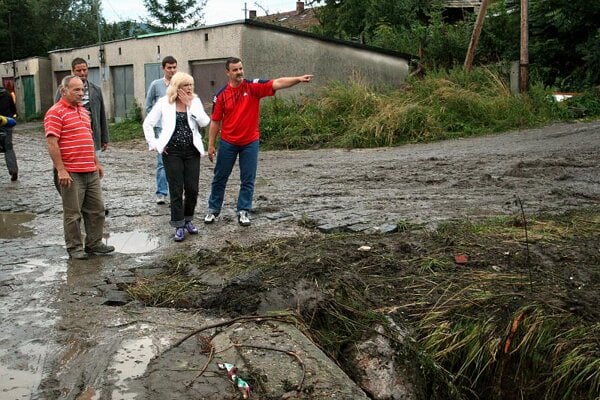 ANOTHER wave of floods hit some regions of central Slovakia on Sunday, August 15. A so-called thousand-year flood filled the streams of the Upper Nitra region and inundated parts of Handlová and Prievidza and their surrounding villages, reaching a depth of 3 metres in some places.

The area hardest hit by the floods was the Handlová valley, through which the Handlovka brook flows. In some villages of the valley almost all the houses were under water and everything close to the river was damaged. Apart from houses, communications, pavements, bridges, public lighting and infrastructure also suffered severe damage, the media reported. River water levels dropped and returned to their normal flows by the night of August 16, when the situation stabilised.

Local floods also hit the city of Martin and surrounding areas in central Slovakia on August 15. Many garages and cellars in the area were flooded.

Torrential rains in the east of Slovakia also caused problems. On August 16, a storm hit the area between towns of Levoča and Prešov. Firemen were also called to help in the villages of Giraltovce and Hanušovce nad Topľou where many trees were felled by the storm.

Heavy rain also affected the area around Žiar nad Hronom, Banská Bystrica Region, causing most damage in the villages of Lutila, Horná Ves and Šášovské Podhradie. The deluge hit the nearby towns of Zvolen, Banská Bystrica, Veľký Krtíš, Brezno and Nová Baňa, where houses were flooded and fallen trees blocked roads, although most were quickly removed.

Rail lines between Margecany and Krompachy in Košice Region, on Slovakia’s main east-west rail trunk line, were blocked by landslides on the morning of August 17.

The mid August floods claimed two human lives. The first victim was found in Handlová on August 15, when the flood first hit. The town’s mayor, Rudolf Podoba, confirmed to the TASR newswire that a man who jumped into his car in an attempt to save it from the flood died when the water hit him while in the car.

Another victim was a 52-year-old railway employee who went missing on August 17. His body was found in the evening of the same day among trees close to the river. He had been clearing railway lines with colleagues after Sunday’s floods when a tree fell on him, knocking him into the river, which carried him away. The police as well as the railway police are investigating the case.

Government prepares to help the victims

The floods came as a first test of how the new government will respond to crises. Interior Minister Daniel Lipšic travelled around the areas that had been hit by the floods. During his visits to towns and villages on August 17 he said he would report on the situation to the rest of the cabinet and propose legislative changes that would enable a more effective response to similar emergencies in the future, SITA reported. Lipšic said the state needs to make available advance payments for villages in order to allow them to continue functioning. Lipšic also expressed doubts about the work of the Civil Corps, saying that the system did not seem to be functioning well enough to protect lives and property as fast as possible.

Prime Minister Iveta Radičová interrupted her holiday in Croatia and also visited the affected areas on August 17, prior to a cabinet session set for the following day. Radičová set aside €300,000 from the prime ministerial reserve in advance as relief for the Upper Nitra area.

At the cabinet session on August 18, Radičová announced she would devote the rest of the prime ministerial reserve solely to flood relief. The money which remains in the reserve now amounts to €2.178 million. The largest part of that, €900,000, will go to the Košice Self-Governing Region, which invested in a bridge damaged by the water in Spišská Nová Ves earlier this summer, TASR reported.

The main amount which the government assigned for flood relief measures amounts to €13.3 million. The money should be used to reimburse towns and villages for the expense of rescue work since the floods. As of August 18, this was calculated as being €11.9 million, SITA wrote.

The damage caused by the series of floods which have hit Slovakia since May this year have so far been estimated at €600-650 million, a sum which does not yet include the damage caused in the Upper Nitra region and nearby areas affected by the mid August floods. A second-level state of alert was still valid on August 18 in many locations in Slovakia. Definitive sums for damage caused by the floods will be announced in a report which should be submitted jointly by the agriculture, environment, regional development and interior departments.

The cabinet has also agreed to involve more people in the government committee to deal with effects of the flooding: apart from the finance, labour, agriculture and environment ministers the committee will also include the transport and health ministers. Sessions of the committee will also be attended by the foreign and economy ministers and the head of the SK8 association, which groups the country’s eight self-governing regions.

Following the August 18 government session Radičová announced that the government will soon introduce a new flood prevention programme. Until now, Slovakia has been following a plan passed in 1999.

“The government will pass a concrete concept of how to proceed, including the financial resources for realising prevention [measures],” Radičová said, as quoted by the Sme daily. “There is one prosaic reason for that. Dealing with the consequences of floods is much more expensive than prevention.”

Radičová is planning to present the new concept to the cabinet at its next session, scheduled to take place on August 27 in eastern Slovakia. Ministers plan to travel to flood-hit areas there to monitor the situation on the spot, SITA reported.