THE RECOMMENDATION by Iveta Radičová’s government that Slovakia refuse to bear any share in the costs of the multi-billion European rescue loan to Greece found a sympathetic ear in the national parliament. Deputies rejected the additional codicils to the original agreement signed by the previous government that would have been required if Slovakia were to contribute any cash to the Greek loan programme. 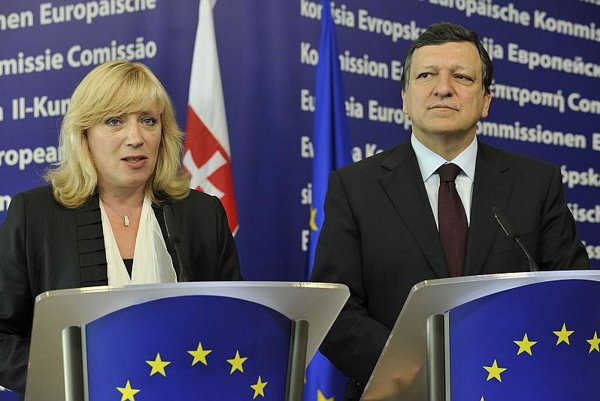 THE RECOMMENDATION by Iveta Radičová’s government that Slovakia refuse to bear any share in the costs of the multi-billion European rescue loan to Greece found a sympathetic ear in the national parliament. Deputies rejected the additional codicils to the original agreement signed by the previous government that would have been required if Slovakia were to contribute any cash to the Greek loan programme.

Of the 79 MPs from the ruling coalition parties, only two deputies from the Christian Democratic Movement (KDH) voted in favour of the bilateral loan, which could have resulted in a Slovak contribution of up to €816 million over the next three years. After the ballot, the KDH’s Mária Sabolová said that she had made a mistake while voting and intended to vote against approving the loan. In the 150-member parliament, 69 deputies voted against the loan to Greece and 13 members of KDH abstained from voting. MPs from the largest opposition party, Smer, did not attend the vote.

“One has to choose solidarity not greed,” said KDH’s Anton Marcinčin, as quoted by the Sme daily, after he voted to approve the loan.

The speaker of parliament, Richard Sulík of the Freedom and Solidarity (SaS) party, said that if Slovakia manages its finances well enough it will not need solidarity from some other country.

“Sooner or later Greece will have to leave the eurozone and with various loans we are only prolonging this agony and preventing a solution which will be painful, but nevertheless would be done quickly,” Sulík said, as quoted by the SITA newswire.

The European Commission quickly responded that Slovakia, by refusing to approve the loan to Greece, violated the EU’s principle of solidarity.

“I can only regret this breach of solidarity within the eurozone,” said Olli Rehn, the EC Commissioner for Economic and Monetary Affairs.

Rehn expects the Eurogroup of eurozone finance ministers and the ECOFIN group of EU economics and finance ministers to return to the issue at their next meeting, according to the Reuters newswire. Rehn stated that he did not expect Slovakia’s decision to threaten the functioning of the loan mechanism.

Representatives of the ruling coalition offered a different view of what is meant by solidarity.

“When solidarity of the poor with the rich, or the responsible with the irresponsible, or taxpayers with bank owners or managers is the question, I do not consider it solidarity,” said Slovakia’s Finance Minister Ivan Mikloš shortly before the vote.

Representatives of the largest opposition party, Smer, declared that it did not oppose the loan to Greece if that country met all its obligations in line with the recovery plan approved by the international community. Saying that this could not be evaluated at the moment, Smer wanted to postpone the parliamentary discussion until September, the TASR newswire reported.

While rejecting the direct loan aid to Greece, parliament nevertheless approved Slovakia's participation in the European Financial Stability Facility (EFSF), based on the government’s recommendation that it do so. Last month, the four parties of the ruling coalition – SDKÚ, SaS, KDH and Most-Híd – all signalled their approval of Slovakia’s participation in the €750-billion EU programme to ensure stability in the eurozone.

Of the 142 deputies present for the parliamentary vote, 140 lawmakers voted in favour of the EU safety net. The only ruling coalition deputy to vote against the proposal was Most-Híd’s Ondrej Dostál; Anna Belousovová, vice-chair of the opposition Slovak National Party (SNS), abstained, TASR reported.

The EFSF plan was developed in response to concerns in the EU about the financial stability of the entire eurozone, which has been shaken by Greece’s public debt woes and doubts about the financial condition of several other eurozone countries. In early May eurozone finance ministers, including Slovakia’s finance minister at the time, Ján Počiatek, agreed to the EFSF at the same time as the multi-billion rescue loan to Greece.

Slovakia’s share of the costs in establishing the EFSF will be about €4.4 billion. Mikloš stated last month that Počiatek and the previous government had failed to negotiate a fair deal for Slovakia.

“If Slovakia is supposed to contribute 2.3 times more in terms of GDP-ratio than the wealthiest EU country, Luxembourg, then it’s evident that the conditions have been negotiated poorly,” Mikloš said, as quoted by TASR.

Radičová and Mikloš visited Brussels on July 13 to speak to EU officials, including European Council President Herman Van Rompuy, about the safety-net programme and Slovakia’s participation in it. They had hoped to secure better conditions but were told directly that these were no longer negotiable.