Eight people have died as a result of a shooting spree that took place in Devínska Nová Ves, a suburban district of Bratislava, on Monday morning, August 30. 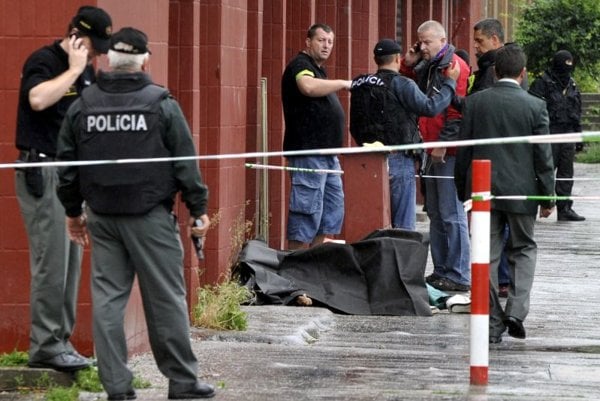 Seven people have died as a result of a shooting spree in Bratislava. (Source: TASR)
Font size:A-|A+

Eight people have died as a result of a shooting spree that took place in Devínska Nová Ves, a suburban district of Bratislava, on Monday morning, August 30.

The gunman, around age 50, killed seven people and wounded at least another nine before killing himself after he was cornered by the police.

The shooting spree began about ten in the morning and more than twenty persons were shot, including a three-year-old child whose condition is now stable. The injured persons with gunshot wounds were taken to four Bratislava hospitals and one was treated on site. Others were driven by eight ambulances that kept transporting people between the shooting site and hospitals in Bratislava.

It has been discovered that a 52-year-old woman was the eighth victim, Slovakia’s Interior Minister Daniel Lipšic told a press conference on Monday afternoon, the TASR newswire reported.

The woman apparently had stepped out onto her balcony at the time of the shooting spree and was shot. Her body was discovered later in the day by her husband.

The man, who was using a type 58 assault rifle that he illegally possessed, was also carrying two shotguns and a lot of ammunition, said Police Corps President Jaroslav Spišiak at another press conference.

The injured persons were taken to four hospitals: on Mickiewiczova Street, in Kramáre, in Antolská Street in Petržalka, and in Ružinov.

While the shooting was ongoing, the municipal office warned people through the local public radio system not to move near windows and not to go near three streets: Ján Smrek, Pavol Horov, and Štefan Králik.

“We had the news checked by the police so we tried to warn people,” Vladimír Mráz, the mayor of Devínska Nová Ves, told SITA. The public transport company also re-routed buses away from the area when asked by the police to do so.

Based on the latest information released by the Slovak police, six of those killed in the shooting spree on Monday morning in Devínska Nová Ves were relatives.

Police Corps President Jaroslav Spišiak told the SITA newswire that the first police patrols arrived within two minutes after the shooting was reported and they met the perpetrator coming out of the building.

When the man encountered the police he started shooting randomly at passersby and also shot one police officer in the head. “During his escape, he shot at everything around him that moved,” Spišiak said.

The police subsequently found five dead, four women and one man – all relatives – in a flat in the building; a sixth victim was found at the front door of the building.

Prime Minister Iveta Radičová convened an extraordinary session of her cabinet for Tuesday afternoon, August 31 to announce a day of national mourning on September 1 for the victims.

The cabinet plans to discuss the shooting tragedy in Devínska Nová Ves, one of the worst such incidents in the country's history, the initial results of the ongoing investigation, and to consider compensation for people affected by the tragedy.

The Government Office also cancelled its open-house event planned for September 1, SITA wrote. Instead, a book of condolences for casualties of the Devínska Nová Ves massacre will be displayed at the hall of the office.