THE GOVERNMENT of Iveta Radičová has widely proclaimed its ambition to save €900 million through wide-ranging public spending cuts. However, it has not yet set out in detail how the state administration will be forced to diet, or how much of the government’s entire consolidation package, worth €1.7 billion and intended to address the budget deficit, will come out of taxpayers’ pockets. 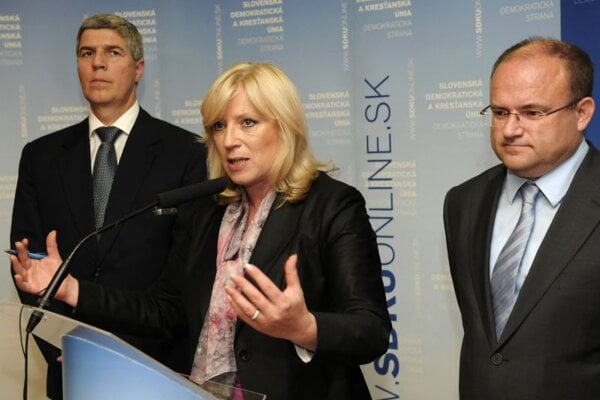 THE GOVERNMENT of Iveta Radičová has widely proclaimed its ambition to save €900 million through wide-ranging public spending cuts. However, it has not yet set out in detail how the state administration will be forced to diet, or how much of the government’s entire consolidation package, worth €1.7 billion and intended to address the budget deficit, will come out of taxpayers’ pockets.

A grand plan floated by Finance Minister Ivan Mikloš and Labour Minister Jozef Mihál to reform the country’s income tax and payroll tax system has been put on hold, and Prime Minister Radičová has said that compulsory social and health insurance taxes will not increase, at least for now.

The government now seems more inclined to tax consumption, so the excise tax on liquor, beer and tobacco will increase. Though the media have speculated about a rise in value added tax, Radičová has remained tight-lipped about this option.

“This is a question I will leave unanswered today because we have alternative proposals and until we consider and calculate them carefully I will not be giving you answers,” Radičová said on August 31, after a meeting of the ruling Coalition Council.

She also said that her centre- right government had agreed not to burden the business environment with higher deductions.

Though more details are due after September 6, it already seems clear that some of what Mikloš and Mihál called “unsubstantiated exemptions and other deformations” in the country’s tax system will be removed.

Current tax exemption enjoyed by Slovaks who participate in special-purpose savings plans, who purchase life insurance, and those who make additional personal pension savings will be scrapped.

As for the €900 million in cuts, Radičová has said that spending will be cut in different areas, including a much-discussed 10-percent saving on wages in public administration, tighter public procurement rules and the postponement of regional projects which are not currently a top priority.

Yet it is the question of how to increase the state’s income which remains vague for now. Originally, Mikloš, of the Slovak Democratic and Christian Union (SDKÚ), and Mihál, from Freedom and Solidarity (SaS), designed a plan to channel as much as €440 million in new revenue to state coffers in 2011, with the prospect of increasing that flow to €560 million and then €635 million in the following two years.

The source of the new revenues proposed in the Mikloš-Mihál package would have been higher compulsory social and health insurance taxes on self-employed Slovaks who work on the basis of trade licenses.

The plan has not won the sympathy of business leaders, chambers of commerce or market watchers, who have all warned that the Mikloš-Mihál package would increase the payroll tax burden and thus negatively impact people’s motivation to work.

Critics of the package also insisted that the proposal to increase these citizens’ payroll tax burden should be offset by lower rates and by making certain types of social insurance voluntary.

From the very beginning, the prime minister has declined to unambiguously support the Mikloš-Mihál package.

“Yes, we have differing opinions; me too,” said Radičová, as quoted by the Sme daily, after a meeting of the four-party Coalition Council held on August 24.

Disagreements emerged not only between the parliamentary opposition and ruling coalition parties and among the four ruling parties internally, but also within the Freedom and Solidarity party itself. These seem to have arisen because Mihál’s proposals did not, apparently, have the support of the party’s chairman, Richard Sulík, or Economy Minister Jozef Miškov, another SaS nominee.

The Mikloš-Mihál package included an increase in the maximum calculation base – on which mandatory health and social insurance premiums are calculated – to a level five times the average salary in Slovakia, as well as an increase in the base for small entrepreneurs.

The proposal would mainly have resulted in increases in monthly social insurance premiums for self-employed people and freelancers such as artists and journalists. In addition, Mikloš and Mihál proposed unifying lump-sum allowances at a single level of 30 percent in place of the three current levels of 25, 40 and 60 percent, and to begin taxing income received from the sale of real estate.

Mikloš noted that the proposed changes in taxes would also affect government officials, who would begin having their lump-sum allowances taxed, the TASR newswire wrote.
“Furthermore, we propose taxing bonuses on incomes from dependent activities that aren’t currently being taxed,” Mikloš said. “This applies to judges, assessors, prosecutors and legal claimants of prosecutor’s offices.”

Mihál stated that the proposed changes in the tax code would primarily affect 20,000 artists and journalists and 30,000 self-employed people, and argued that this is a rather small group of people given that around 2.4 million Slovaks earn incomes.

“I don’t see reason for concern,” he stated, as quoted by TASR.

Mihál said that freelancers are the best-off among Slovak workers, currently paying only 13 percent of their total income to the state. He also asserted that other self-employed persons retain 75 percent to 85 percent of their invoiced income while ‘ordinary employees’ in comparison see around 43 percent deducted from their gross salaries in taxes, TASR wrote.
But business leaders have found plenty to dislike about the planned changes.

The Slovak Business Alliance (PAS), which includes many major businesses in Slovakia, stated that elimination of exemptions in the tax and payroll contribution system should not serve as the main source of new revenue to tackle fiscal consolidation.

PAS warned that the proposed measures would actually increase the payroll tax burden and the cost of labour, and might also have a negative impact on people’s motivation to work, the SITA newswire reported. Robert Kičina, the general director of PAS, suggested that the government should tax consumption instead.

AmCham stressed that raising payroll tax ceilings would have a direct effect on people with university education and highly-qualified employees working in sectors such as information technology, telecommunications and pharmaceuticals. These are sectors with high added value and a sophisticated labour force, and the Chamber notes that all governments in Slovakia have called for the creation of a competitive, knowledge-based economy, wrote TASR.