Western SLOVAKIABratislava CONCERT: THE ST PAUL’S (Knightsbridge) Festival Choir from London visits Bratislava on September 10 during its tour of central Europe. Appearing in the Jesuit Church at 19:00, the choir will perform choral pieces and organ compositions by Händel, Grieg, Mendelssohn, Bruckner, Monteverdi and Parry. Entry for the Bratislava concert is free, as it is for the September 12 concert in St Emeram’s Basilica in Nitra. 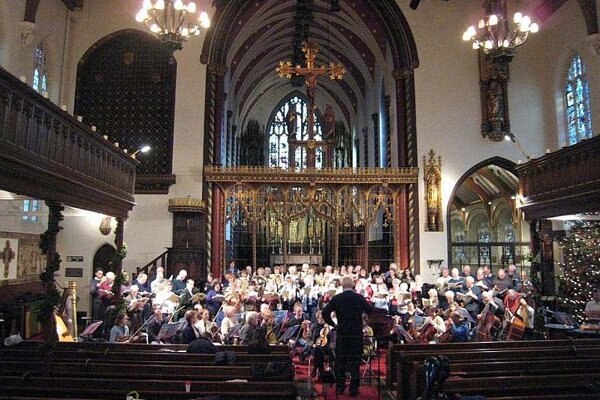 Bratislava CONCERT: THE ST PAUL’S (Knightsbridge) Festival Choir from London visits Bratislava on September 10 during its tour of central Europe. Appearing in the Jesuit Church at 19:00, the choir will perform choral pieces and organ compositions by Händel, Grieg, Mendelssohn, Bruckner, Monteverdi and Parry. Entry for the Bratislava concert is free, as it is for the September 12 concert in St Emeram’s Basilica in Nitra.

Bratislava
OPERA: Gala concert opening of the 2010/11 opera season at the Slovak National Theatre – This concert will offer world famous Hungarian soprano Eva Marton with a selection of Slovak soloists like A. Kohútková, Ľ. Rybárska, J. Sapara-Fischerová, Ľ. Vargicová, J. Benci and T. Juhás, as well as foreign talents I. Silčukov and G. Jurič. Traditional opera works will be complemented by the premiere of Polovtsian Dances from Prince Igor by A. Borodin.
Starts: September 12, 19:00; new building of the SND, Pribinova 2. Admission: €5-€25. Tel: 02/2047-2299 begin_of_the_skype_highlighting              02/2047-2299      end_of_the_skype_highlighting; www.snd.sk.

Bratislava
CLASSICAL MUSIC: The Slovak Philharmonic conducted by Martin Majkút – This Slovak maestro, currently living in the USA, will conduct Rodeo by A. Copland, the Concert for Piano, Strings and Kettle-drums by J. Kolkovič, and Symphony No 2 in D Major by J. Brahms.
Starts: September 10, 19:00; historical building of the SND, Hviezdoslavovo Square. Admission: €7-€9. Tel: 02/2047-5233; www.filharm.sk.

Bratislava
LIVE MUSIC: Vladimír Mišík a ETC – The legendary Czech rock singer and his band will demonstrate their skills and draw new audiences in the Slovak capital.
Starts: September 8, 20:00; Klub Za zrkadlom, Rovniankova 3. Admission: €6 (in advance), €8 (on the day of concert). Tel: 02/6381-1328; www.kzp.sk.

Piešťany
CINEMA: Cinematik – Fifth International Film Festival of short as well as feature films from all over the world. The movies will be screened in the House of Art (Dom umenia), Fontána cinema theatre, Klub cinema theatre, and Kursalón. The event also includes exhibitions, lectures, and concerts by alternative music bands.
Starts: September 9-15, usually from 11:00 till midnight, various sites in Piešťany. Admission: some events are free, movies €2 each; accreditation for the whole festival costs €10-€12. Tel: 0914/266-911; www. cinematik.sk.

Banská Bystrica
Traditional Crafts' Market: WITHIN The Days of Banská Bystrica, the biggest event is the Traditional Crafts' Market, or Radvanský jarmok, in the Radvaň borough. The 13th year takes place on the weekend of September 10-12 and includes, apart from folk goods and demonstrations of traditional crafts, concerts, folk performances, dance and fencing shows, demonstrations of medieval torture and theatre.

Oravská Polhora
TRADITIONAL FOLK MUSIC: The XI International Festival of Bagpipes – In this village, more than a hundred bagpipers from seven countries including Croatia, France, the UK and Italy will show their musical and craft skills. The programme will be enhanced by an international competition, bagpipe workshop and exhibition of photographs.
Starts: September 10-12; various venues: Oravská Polhora, Zuberec and Żyviec, Poland. Admission: free. Tel: 043/5864-928; www.osvetadk.sk.

Prešov
MULTICULTURAL FESTIVAL: Stanica Východ 2010 – The Station East 2010 festival brings its multicultural events to Prešov for the fourth time and to Košice for the very first time. It consists of gigs by bands like Chiki liki tu-a, the Hugo Čáves Orchestra, Farsa Duo featuring Rhantisi Franklin, the Orchestra of the Secondary Artistic School of Košice and talented players from Summer School. The latter is aimed at finding talented children from Prešov, Košice and the surrounding areas and giving them professional guidance in singing, percussion, painting and hip-hop, before showing the results to the public.
Starts: September 10, 18:00, Main Street (Hlavná) in Prešov; and September 11, 18:00 in Kasárne Kulturpark Košice. Admission: free, €6 in Košice. Tel: 0907/796-660; www.stanicavy- chod.sk.