AT ONE time hundreds of thousands of Germans used to live in what is now Slovakia. But today ethnic Germans are one of the smallest minorities in the country. This is a consequence of World War II and the post-war Beneš Decrees which stripped Carpathian Germans of their civil rights and their property and forcibly removed most of them from Slovakia. Carpathian Germans perceive this as an injustice – an injustice which has been discussed too little in Slovakia. Guests – Hauerland (Hostia – Hauerland), a documentary by Slovak filmmaker Vladimír Štric, peeks under the lid of history and tells the story of the 800-year common journey of Slovaks and Germans in a region of central Slovakia called Hauerland. The film premiered at the end of 2009 on public-service Slovak Television and it was recently released on DVD in both German and English. 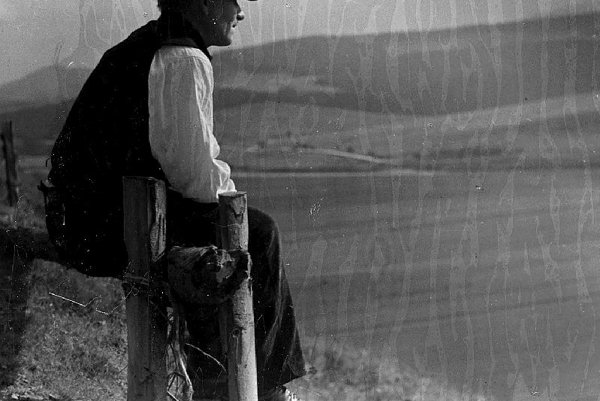 AT ONE time hundreds of thousands of Germans used to live in what is now Slovakia. But today ethnic Germans are one of the smallest minorities in the country. This is a consequence of World War II and the post-war Beneš Decrees which stripped Carpathian Germans of their civil rights and their property and forcibly removed most of them from Slovakia. Carpathian Germans perceive this as an injustice – an injustice which has been discussed too little in Slovakia. Guests – Hauerland (Hostia – Hauerland), a documentary by Slovak filmmaker Vladimír Štric, peeks under the lid of history and tells the story of the 800-year common journey of Slovaks and Germans in a region of central Slovakia called Hauerland. The film premiered at the end of 2009 on public-service Slovak Television and it was recently released on DVD in both German and English.

Through the testimonies of three generations of Carpathian Germans, archival footage and photographs, the film maps the history of Carpathian Germans living in Hauerland, a region lying between Prievidza and Kremnica. The protagonists in the film, those living in Slovakia as well as those who were forced to leave, speak about their youth and their lives since. Despite the fact that many Carpathian Germans did not support Hitler and the Third Reich, tens of thousands of them were expelled from Slovakia after World War II and those events resonate strongly throughout the film.

The most moving part of the film is the testimony provided by Helga Nicklesová as she narrates the story of a massacre that took place in Sklené on September 21, 1944, when Slovak partisans killed 187 men, all Carpathian Germans, from her village. Her father escaped the massacre only because he had been wounded and was lying in bed in his house. His wife, with small Helga in her hands, prevented the men from shooting him with her own body. Later she knew who the men were who had planned to shoot her father because after the war they lived alongside them in the village. But her father used to say to her: “You may never feel hatred.”

Štric, who authored the screenplay and was the director and producer of the film, wrote in a leaflet to the film that there is no doubt that some Carpathian Germans were active members of the Deutsche Partei, a local party of Germans that was aligned with the Nazi-linked Tiso government of the first Slovak Republic, and that some were also involved with the Nazi Schutzstaffel (the SS).

“But was that a sufficient reason to collectively condemn them all?” he asks. “Was it a reason to deprive them all of their civil rights, to subsequently relocate them into Austria and Germany, to massacre civilians?”

While shooting the film, Štric allowed Carpathian Germans to speak freely about their memories and asked questions just here and there. When the filming began, Štric told The Slovak Spectator that the attitude of many Carpathian Germans was rather hands-off. But as the filmmakers began to be accepted by the community, they were passed from one family to another like a baton in a relay race.

“At the beginning they were cautious,” said Štric. “In the end, most objections to the film were also raised among the Carpathian Germans. I think this is because their historical experience orders them not to draw attention upon themselves. However, for me the first responses to the film were the most important, and they were saying that finally it was being said what should have been said a long time ago.”

Recently Štric met with two central characters who are bearers of controversial themes in the movie.

“They both thanked me, even Dr Nicklesová, who speaks about the massacre in Sklené, told me about the very positive reactions of Slovaks,” Štric told The Slovak Spectator.

Štric set upon the idea to do a documentary film about Hauerland as he was completing a short film about Germans in Slovakia as part of a series about minorities.

“At that time I realised it was a very good topic: dramatic and historically provocative,” said Štric. “And the second reason is personal, as my ancestors were Germans who arrived in Slovakia several hundreds years ago, specifically to Špania Dolina.”

He decided to focus on Hauerland because only a few people know much about this region. He did not limit the scope of the film to only the dramatic years during and after the war. A portrayal of the current generation of Carpathian Germans and how they understand their place in Slovak and European society plays an essential part in the film.

Štric wanted the film to be the first in a trilogy, with the second covering the Spiš area and the third focusing on Germans living in Bratislava and Košice, but he said for the time being these follow-up films are not in prospect.

The term ‘Carpathian Germans’ was introduced by historian Raimund Friedrich Kaindl at the beginning of the 20th century to designate Germans living in Slovakia as well as in Sub-Carpathian Ukraine. The first Germans were invited to the region in the 11th century and often came here as ‘guests’ protected by kings. They were granted numerous privileges, founded new towns, and brought new technologies, especially in mining and metallurgy.

The Museum of Carpathian German Culture, a part of the Slovak National Museum, estimates that about 250,000 Germans, accounting for between one-fifth and one-quarter of the total population, lived in the region of current day Slovakia during the Middle Ages. There are five main geographical areas in which the Carpathian Germans were settled: Lower and Upper Spiš, the valley of the Bodva river (Medzev and its vicinity), Bratislava and Hauerland. The latter area got the name from a frequent suffix in the German names of villages – hau meaning wood logging and creation of free land – such as Kuneschau (Kunešov) and Glasehau (Sklené).

Before the outbreak of World War II about 150,000 Carpathian Germans lived in the territory of what now is Slovakia. In the fall of 1944, Nazi Germany ordered the evacuation of German civilians living in Slovakia to the west due to antipathy towards the German population. Massacres similar to the one in Sklené occurred in other places, for example close to the Czech town of Přerov when over 260 Carpathian Germans, mostly women and children, were killed after the war while on their way back home to Slovakia from Czech border regions where they had been evacuated during the war.

Many of the 130,000 evacuees tried to return to their homes after the war but they often found that their houses had been occupied and they were then sent to work camps. Based on the Beneš Decrees and the assumption of collective guilt Carpathian Germans were deprived of their civil rights and property and were expelled to Germany and Austria. Only about 24,000 Carpathian Germans remained in Slovakia. In addition, all German-language schools were closed down and the few remaining residents were prohibited from speaking German, according to the Carpathian Germans’ testimony in Štric’s documentary.

After the fall of communism

The fall of the totalitarian regime in 1989 provided a better opportunity for the German community in Slovakia. After World War II contacts between Carpathian Germans within the country as well as with friends or relatives in Germany were significantly weakened or severed entirely. The arrival of a democratic government in Slovakia allowed the revival of Carpathian German organisations and in September 1990 the Carpathian German Society in Slovakia (der Karpatendeutsche Verein in der Slowakei, or KDV) was established.

“It has become a representative of Carpathian Germans living in Slovakia,” Pöss told The Slovak Spectator. “And even though it is a primarily a cultural grouping, as its objectives are keeping and renewing the traditions of Carpathian Germans in Slovakia, it has also responded to some political themes and events. The organisation also acts as a partner to institutions of government.”


“Of course, we perceive this [expelling of Germans] as injustice, when one forcibly had to leave their home where they had everything,” said Pöss.

What Pöss regards as important is to speak openly about what happened to the German population in Slovakia, what preceded this, and that the war was initiated by Germany.

“It is necessary to discuss these things: what happened to the German population during World War II as well as during the Slovak National Uprising – this also is part of history – but it is necessary to see all these things in a wider context,” he said, adding that it is possible to dig deeper into history. “But we are already trying to look forward. Carpathian Germans are integrated into Slovakia; we want our culture to continue to develop and the contributions and positive influence that Germans have had on the material and spiritual development of Slovakia to not be forgotten.”

Pöss estimates that the German community in Slovakia numbers about 10,000 and believes its strength and visibility is an achievement of KDV and its activities. Carpathian Germans now meet in seven centres of KDV across Slovakia and KDV will celebrate its 20th anniversary in Medzev on September 18. It also now has an active organisation of young Carpathian Germans.

The Slovak National Museum (SNM) established the Museum of Carpathian German Culture in 1997 and Pöss was present at its very beginning. At that time the museum started from nothing and it did not hold a single cultural artefact. Now its collection contains more than 5,500 artefacts representing the many centuries Carpathian Germans have lived here.

The museum operates a library which is the best-equipped institution in Slovakia in terms of books and other print materials about Carpathian Germans. It publishes books under the imprint Acta Carpatho-Germanica. And Pöss says the museum often serves as the first place that people come when searching for relatives with Carpathian German roots.

The museum also organises specialised exhibitions about Carpathian German culture and history and as well participating in events organised collectively by the SNM and with other museums dedicated to the cultures of other minorities in Slovakia.