BUSINESSES and citizens have been anxiously waiting for the government of Iveta Radičová to completely reveal the key ingredients of its new nutritional regime to pump up the state treasury and its diet to curb state spending, both to be offered up in an attempt to bring Slovakia’s public finances into better shape. Though not every ingredient in the long-heralded consolidation recipe has been revealed, the overall contours designed to save €1.7 billion through a combination of expenditure cuts and revenue enhancements are now becoming visible. 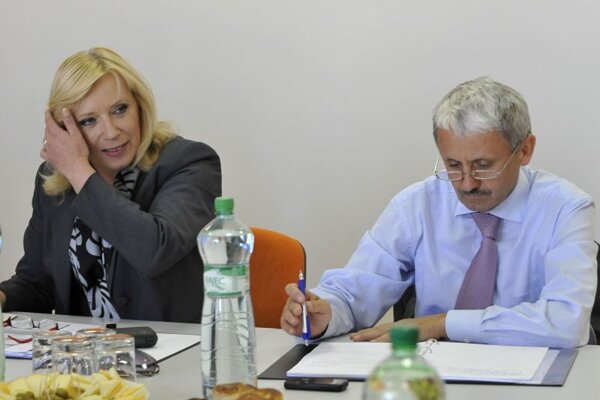 BUSINESSES and citizens have been anxiously waiting for the government of Iveta Radičová to completely reveal the key ingredients of its new nutritional regime to pump up the state treasury and its diet to curb state spending, both to be offered up in an attempt to bring Slovakia’s public finances into better shape. Though not every ingredient in the long-heralded consolidation recipe has been revealed, the overall contours designed to save €1.7 billion through a combination of expenditure cuts and revenue enhancements are now becoming visible.

After a laborious multi-hour debate, Slovakia’s four ruling parties agreed to hike the country’s VAT rate from 19 percent to 20 percent and keep it at that level until the country’s budget deficit falls under 3 percent of GDP. While a lower VAT rate for books and some health-care products will be continued, the reduced 6 percent VAT rate for informal, yard sales of agricultural products will be jumped up to the standard 20 percent rate. Excise taxes on tobacco and beer are proposed to climb as well, just to name a few of the most significant ingredients of the government’s recipe to raise more revenue.

The Finance Ministry has estimated that the planned changes to tax and non-tax revenue streams should bring an additional €598 million into the state coffers in 2011, which is 0.9 percent of GDP. However, the ministry has also said that these numbers might still change as final decisions on payroll contributions for social and health insurance are made, which the ministry said should be known in the next few days, the SITA newswire wrote.

Even though the government has trumpeted a number of changes, the VAT hike is the one proposal that is sure to channel substantial extra revenues, estimated at €185.5 million, to the state treasury.

Earlier this month the government said increasing revenue streams should make up no more than €800 million of its consolidation package and that cuts in spending should reach at least €900 million next year, SITA reported. Radičová said the spending cuts will be made in various areas, including a much-discussed 10-percent reduction in wages in public administration, tighter public procurement rules, and the postponement of regional projects which do not have a top priority, but few specific details have been released.

Will the hike hurt?

While tax hikes, even minor ones, often hit a raw nerve with the business community and with the tax-paying public, the reactions thus far have been muted and several economic analysts are suggesting that increased VAT rate will not dramatically push up prices for consumers. The largest opposition party, Smer, isn’t sharing that opinion and has termed the proposed changes the “worst possible rightist solution”.

Radovan Ďurana of the INESS economic think tank told The Slovak Spectator that hiking the VAT rate will increase the tax burden on the population. Ďurana added that it is not important to differentiate who will directly pay for the tax hike, whether it is consumers doing so through higher prices or retailers and producers who do so by lower profit margins, since both groups are parts of the Slovak economy.

Ďurana insists that the state will be taking €180 million or more from the citizens and businesses in Slovakia, depending on the growth of prices. But he also added that the higher tax rate can help reduce the state budget deficit which may exceed €4.6 billion this year.

Vladimír Vaňo, chief analyst with Volksbank, told The Slovak Spectator that the government-approved VAT hike is as quite small and less than the original proposal to increase VAT to 22 percent.

Radičová stated that the VAT increase would not push up prices in Slovakia.
“Experience shows that a 1-percentage-point hike in VAT will not be reflected in prices; it is only increasing revenues to the state budget,” Radičová said, as quoted by Sme.

The increase in VAT rate was quickly dubbed as “Fico’s tax” by the ruling coalition parties while Fico sent the criticism straight back by stating that by the ruling coalition parties are violating their pre-election promises since they had pledged not to raise taxes. He also dismissed the argument that a 1-percentage-point VAT increase will not be reflected in prices.

“Mainly people who have below-average incomes will feel the price hike on their own skins,” Fico said, as quoted by SITA.

Originally, Finance Minister Ivan Mikloš and Labour Minister Jozef Mihál had pushed a proposal to increase state revenues by modifying the country’s income tax and payroll tax system. But this plan was put on hold after Radičová declared that compulsory social and health insurance taxes will not be increased, at least for now.

However, some of what Mikloš and Mihál called “unsubstantiated exemptions and other deformations” in the country’s tax system will likely be modified.

The tax exemption currently enjoyed by Slovaks who participate in special-purpose savings plans, who purchase life insurance, and those who make additional personal contributions for pension savings are expected to be scrapped.

An increase in the rate of VAT had been strongly opposed by the Freedom and Solidarity (SaS) party.

“We look at it as a compromise,” SaS leader Richard Sulík said as quoted by Sme. “We have unambiguously been against hiking VAT.”

He added, however, that his party is taking into consideration the high public finance deficit and this is why his party nodded to the increase. Sulík said he does not look at it as breaking promises given to voters during the election campaign because it is only a temporary decision.

Dissecting the impact of higher VAT

Vaňo noted that the VAT increase is envisioned as only one of several measures towards fiscal consolidation.

“Given the flexibility, predictable and immediate fiscal impact of the VAT hike, one can say that only very mediocre use of this tool has been made,” Vaňo told The Slovak Spectator. “Recently many countries in the region hiked their VAT more significantly.”

In comparison to the recent hike of VAT in Romania from 19 percent up to 24 percent, Vaňo said that Slovaks are enjoying a quite lenient approach to fiscal consolidation in terms of revenue measures.

“This on the other hand suggests that expenditure cuts will need to be commensurately more stringent – an assumption which one might call a courageous one, given the early evidence of how difficult four-party negotiations have proven to be so far,” Vaňo said. “Moreover, even if approved, the fiscal effect of expenditure restraint will not be that fast, given the need to adopt new legislation for many of the so-called mandatory expenditures driven by existing laws.”
Nevertheless, these analysts do not predict any dramatic impact on consumer prices from the VAT increase.

“Given the minimal change, but more importantly due to ongoing hesitant consumer demand and continued fierce competition in the retail market, which faced a double-digit real sales drop in 2009, one can assume that the direct impact of such a small VAT hike on consumer prices will be minimal, if any,” Vaňo said.

To soften the reaction to the measure, the government said that higher VAT level is only temporary and would be in place only until the public finance deficit is squeezed under 3 percent of GDP.

Though Ďurana speaks positively about the temporary nature of the tax increase, he disagrees with its open-ended setup and believes that a one-year period should be enough.

“The VAT should be hiked for one year only and then before the end of the year repeatedly evaluated,” Ďurana said. “It would create room for repeated annual review of the cabinet’s efforts to reduce ineffective public spending and there would be continuous pressure for adopting fundamental reforms.”

According to Ďurana, the government is gaining a cushion through the open-ended setup which might, during forthcoming years, weaken its resolve to consolidate public finance through expenditure reductions.

“We do not see a reason to have the lowering of the tax rate bound to a decision of Eurostat,” said Ďurana, adding that the volume of the deficit is fully in the hands of the Slovak government and parliament.

Vaňo finds the temporary nature of the hike an interesting concept and suggests that time will show how well it works out. However, he recalled that the new cabinet programme statement included a declaration of aiming towards a balanced budget in the medium term.

“Giving an upfront pledge to lower the VAT back to 19 percent as soon as budget deficit creeps under the 3 percent ceiling would hence suggest an ongoing plan for a multi-year cost-cutting campaign,” Vaňo said.

Vaňo also pointed out that according to the Heritage Foundation, the overall tax burden in Slovakia is considered relatively low.

Regarding other measures proposed by the government, Vaňo said that Slovakia does need a sizeable consolidation in its public finances and in such a situation, any measures on both the expenditure and revenue sides are welcome.

“The smaller the financial impact of any one measure, the larger the number of measures that are required,” Vaňo said. “This is very much the case for many of the mentioned items. Certainly, governments in Hungary or in Romania were more active in using available revenue-rising tools, especially in the area of indirect taxes.”

Ďurana, however, notes that certain proposed tax changes will pump up state revenues only to a small degree and that all kinds of taxes are not equal in their effects.

“Hiking excise taxes is seeking the easiest way,” Ďurana said. “If the deficit is to be the reason for hiking excise taxes and not the expenses for treating the impacts of alcoholism and smoking, then only VAT should be hiked, since it is flat and affects all the consumers with the same rate.”

Ďurana commented that after two months of rule, the coalition government has not introduced a package of measures which would lead to structural changes and long-term savings in expenditures by the state.

“In our opinion, the government first should have exhausted the possibilities of saving [through expenditure reductions] and only after that reached for a tax hike,” Ďurana stated.