AN EXPERT commission organised to help decide the future of the equestrian statue of the Great-Moravian ruler Svätopluk has said that the statue should not remain in the front courtyard of Bratislava Castle, where it was installed and officially unveiled by former prime minister Robert Fico. 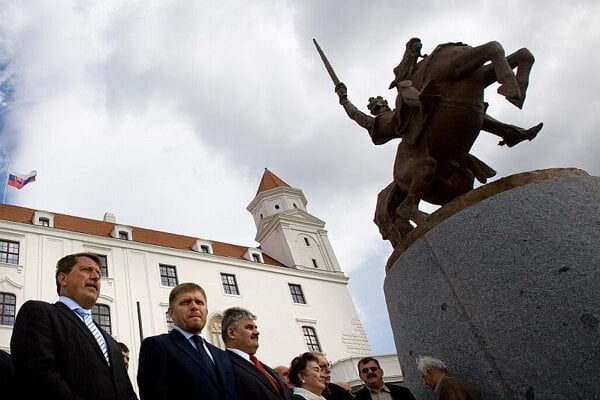 AN EXPERT commission organised to help decide the future of the equestrian statue of the Great-Moravian ruler Svätopluk has said that the statue should not remain in the front courtyard of Bratislava Castle, where it was installed and officially unveiled by former prime minister Robert Fico.

The nine-member commission, convened by Speaker of Parliament Richard Sulík, has offered three suggestions on what should be done with the statue: move it to another part of the castle premises, put it in a museum, or return it to its sculptor, Ján Kulich.

“The statue of Svätopluk has come to represent the problem of ideologisation and political instrumentalisation,” said historian Marína Zavacká, the head of the commission, as reported by the SITA newswire.

“The statue must be removed from this courtyard,” said Štefan Šlachta, Bratislava’s head architect, who was also a member of the commission.

The commission said that if the sculptor does not agree with this proposal, the statue should be handed over to the Slovak National Museum as "evidence of political instrumentalisation and myth-making". The third option offered is to return the statue to Kulich and have him replace it with another, more appropriate one.

The commission has also requested that the symbol shown on the coat-of-arms be changed, as it resembles the Slovak war-time Nazi symbol. They also took exception to the text that is displayed on the pedestal, which labels Svätopluk as “King of the Old Slovaks,” saying it should be removed as it misleads, mythicises and does not conform to current historical science.

Zavacká said that experts on the 9th century, the time Svätopluk lived, have found so many errors in the statue that it can hardly be considered to be Svätopluk at all, and it’s only by way of informal agreement that the historians refer to it as such.

The final decision on the statue’s future is now up to Sulík, who said that he is currently considering all the options.

The opposition party Smer, led by Fico, originally initiated the placement of the statue in the castle grounds and have given a statement saying they will act only once Sulík’s official decision has been made known.

They also stated that any potential manipulation of the statue would be a ‘barbaric anti-Slovak act’, SITA reported.

Meanwhile, Matica Slovenská, a cultural institution with a focus on the Slovak nation, has called on Sulík to leave things as they are and leave the statue where it stands and the text on the pedestal untouched.

Matica Slovenská said that the commission convened by Sulík had not been created according to accepted standards as he did not invite delegates from all relevant professional institutes to participate, the TASR newswire reported.

Matica Slovenská also stated that Svätopluk is a part of the living, state-creating tradition of Slovaks.

“It’s no myth, because it’s connected to real historical personalities and events, and this can be proven through the objective criteria of the historical sciences,” Matica Slovenská wrote in an official statement published by the TASR newswire.

The sculpture, which shows Svätopluk on horseback in full battle armour, was unveiled by the leaders of the then-governing Smer partyshortly before the elections in June before they lost power.

Fico said at the ceremony that he sees the statue as a symbol of the birth of the second pillar of national self-confidence, which, he said, is now being built.

The bronze statue on a granite base is 7.8 metres tall. The text on the base reads "Svätopluk - King of the Old Slovaks", and carries the opening salutation from a papal bull that Pope John VIII sent to Svätopluk in 880 AD.

The sculptor, Ján Kulich, was a prominent sculptor in Czechoslovakia during the communist era.