Tougher gun licence rules are on the table

THE UNPRECEDENTED shooting spree at the end of August in Devínska Nová Ves, a suburban area of Bratislava, that left eight people dead and many more injured, some seriously, will likely lead to stricter rules for gun ownership in Slovakia. The Interior Ministry was quick to react to the shocking tragedy with a proposed amendment to Act 190/2003 on guns and ammunition which was submitted for interdepartmental review only one week after the shooting spree. The government is expected to deal with the proposal on September 22 but it is not clear if the proposed changes have widespread support among the public. 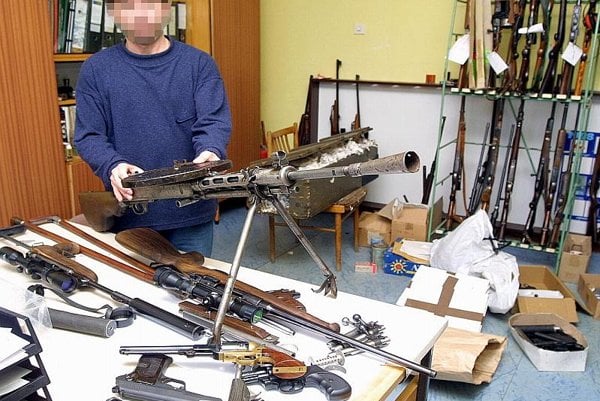 THE UNPRECEDENTED shooting spree at the end of August in Devínska Nová Ves, a suburban area of Bratislava, that left eight people dead and many more injured, some seriously, will likely lead to stricter rules for gun ownership in Slovakia. The Interior Ministry was quick to react to the shocking tragedy with a proposed amendment to Act 190/2003 on guns and ammunition which was submitted for interdepartmental review only one week after the shooting spree. The government is expected to deal with the proposal on September 22 but it is not clear if the proposed changes have widespread support among the public.

There are presently about 157,500 holders of gun licences in Slovakia, according to information provided to The Slovak Spectator by Viktor Plézel, a spokesperson of the Police Corps. That accounts for about 3 percent of the population of Slovakia, of all ages.

But according to Ľudovít Miklánek, the president of the board of Legis Telum, the Association of Shotgun Owners, people who also own airsoft, paintball, or other air-powered guns that do not require a gun licence, should also be counted among those who are keen on shooting and gun ownership. Adding these people, Miklánek estimated, brings the number of shooting enthusiasts in Slovakia to about 10 percent of the population.

Each person who applies for a gun licence is required by current Slovak law to prove a need to own or to carry a gun or ammunition.

Ownership of automatic guns that can fire multiple rounds is not permitted in Slovakia. The gunman from Devínska Nová Ves was shooting multiple automatic rounds with a Vz. 58 assault rifle, a self-loading rifle which the law allowed him to own, but it had been modified to shoot in rounds – a modification which made it illegal.

Stricter rules on the table

The aim of the amendment submitted for interdepartmental review is to make the conditions for obtaining a gun licence stricter, and to limit the holding and carrying of automatic guns and auto-loading guns which look or operate similarly or equally to automatic weapons, reads the report which accompanied the proposed amendment. The amendment would change the rules effective January 1, 2011.

There are basically two major changes proposed by the ministry. The first states that the valid term for gun licences should be shortened from the present 10 years to only five. Under the new rules, applicants for a gun licence would also be obliged to undergo an examination by a clinical psychologist. The second change bans self-loading rifles which look or operate similarly or equally to automatic guns or which were produced by reconstructing an automatic gun.

The Interior Ministry submitted its amendment to the law on guns and ammunition for fast-tracked inter-departmental review on September 7, ministry’s spokesperson Gábor Grendel told The Slovak Spectator. The text of the amendment will remain posted online until September 14 after which the ministry will prepare a final document to be submitted to the government cabinet.

“It will be only then that all the new measures which may be incorporated into the law will be known,” Grendel said.

Miloslav Benca, the president of the Slovak Shooting Association (SSZ), told The Slovak Spectator that none of the sport disciplines which his association shelters require the use of the kind of guns which the ministry is considering banning. He added, however, that the published statements of Interior Minister Lipšic do not make clear exactly what limits he plans to propose in the amendment. Benca noted that SSZ represents successful athletes in Olympic sport disciplines and his association will appropriately respond to the proposal with expert comments if it is invited to do so.

Since the public debate has begun the Legis Telum association appears to be one of the main opponents of changes in gun legislation. Miklánek, the association’s board president, claims that there are no automatic guns circulating among the public, apart from those held by a small circle of antiquarians.

“All the pattern 58 rifles which were introduced to the civil market have been converted to self-loading rifles,” he told The Slovak Spectator. “Their trigger mechanism was modified so that they cannot shoot in rounds.”

Miklánek said that members of the public who are shooting enthusiasts have gone into a state of panic after the proposed amendment to Act 190/2003 was published online.

“It is very vague,” Miklánek said. “It can be interpreted in a way that almost all the self-loading rifles, both long and short, would belong to the category of banned guns and the institution of the ministerial exception would be completely abolished. That means that all those guns must be either discarded or given over to the police, including the antique pieces.”

Miklánek rejected what he called the mystification of the Vz. 58 assault rifle, saying that some guns used for hunting can be much more damaging than that rifle.

“It’s not guns; it’s people who use them that kill,” Miklánek said.

Some of those commenting on the proposed legislation are questioning the effectiveness of the psychological tests that the ministry is proposing. Under current legislation, only approval from a general practitioner is required for a person to be eligible to hold a gun licence.

That was the case with the license held by the shooter in Devínska Nová Ves who had received approval from his general practitioner. He was not required to take any psychological tests.

A requirement to undertake psychological tests for a gun license was part of Slovak legislation in the past, in 1994 and 1995, but it was subsequently removed and an attempt to reintroduce the requirement in 2002 was stopped primarily through opposition by the hunters’ lobby, the Sme daily reported.

Benca of SSZ told The Slovak Spectator that his association, along with the hunters’ associations, have in the past stood against the general duty to undergo psychological tests as a requirement to hold a gun licence.

“I still believe that the present law on guns and ammunition is strict enough in the area of gun licences,” Benca said.

Miklánek said Legis Telum is not a priori against the psychological tests but he urged that the legislation should assure that the testing will not become just a pro-forma procedure. He also stated that testing every gun licence holder every five years might not have the desired effect.

“It would be more appropriate to condition the [psychological] testing with a request from a general practitioner who awards the approval,” Miklánek said, adding that this is stipulated by the law already. He suggested the law could also enable the police to request psychological testing anytime there is a suspicion that it might be needed.

Even psychologists have said that such tests might not always reveal a problematic personality.

“An applicant can pass the tests and subsequently might turn out to be a murderer,” Karol Kleinmann of the Slovak Chamber of Psychologists said, as quoted by the Hospodárske Noviny daily.

Better guns for the police

In addition to the proposed amendment to Slovakia’s gun legislation, the Interior Ministry has proposed a plan for the gradual rearming of police forces, saying that the weapons used by Slovak police have become old-fashioned and insufficient. In an immediate reaction after the August 30 shooting spree, Interior Minister Daniel Lipšic ordered all police patrols to always carry an automatic gun, the so-called Scorpio.

That action raised concerns among some parts of the public, causing Police Corps President Jaroslav Spišiak to hurriedly explain that Scorpio weapons had been standard equipment for the police in the past, especially for emergency motorised units. The police corps has also said that if the police in Devínska Nová Ves had been armed with Scorpios they could intervened against the gunman quicker, even before the well-armed specialised unit arrived.

A general upgrade of arms for the police force is also part of the government’s programme statement. Grendel, the Interior Ministry’s spokesperson, said that the rearmament plans will cover a majority of the police officers, except for specialised units which already have modern and suitable weapons. The gradual rearmament, to be financed from the state budget, is expected to start in 2011.

“The reason for the rearmament is the attempt by the department to improve the conditions for protecting decent citizens,” Grendel said. “We believe 20-year-old guns are already out of date.”

Slovak Radio reported that the new police armaments will cost tens of millions of euros and that the speed of the process will depend on how well the interior minister manages to push this agenda during negotiations over the state budget.