“Colour is light on fire”

THE DANUBIANA Meulensteen Art Museum, a modern art gallery on the Danube about 15 kilometres from Bratislava, has celebrated its tenth anniversary in grand style. By August 29 it hosted Retrospective in Blue, an exhibition of a large number of works by Sam Francis and the first exhibition in Slovakia of this internationally recognised abstract artist. 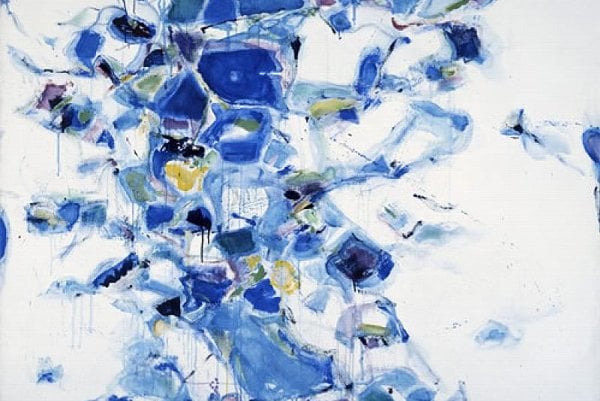 THE DANUBIANA Meulensteen Art Museum, a modern art gallery on the Danube about 15 kilometres from Bratislava, has celebrated its tenth anniversary in grand style. By August 29 it hosted Retrospective in Blue, an exhibition of a large number of works by Sam Francis and the first exhibition in Slovakia of this internationally recognised abstract artist.

“We were thinking of organising something special for the anniversary for a long time,” Vincent Polakovič, the director of Danubiana, told The Slovak Spectator.

Polakovič said that Gerard Meulensteen, one of Danubiana’s co-founders and its patron, holds the biggest collection of works by Sam Francis in Europe. “Thanks to Mr. Meulensteen’s and Dutch gallery owner Nico Delaive’s contacts we managed to present such an extensive exhibition at Danubiana.”

The last time such a large European exhibition of Francis' work was in Bonn in 1995 and Polakovič does not expect that it will be repeated in the near future.

“I believe that this is one of the greatest exhibitions that has ever been presented in Slovakia because Sam Francis, as the representative of the second wave of American abstract expressionism, is now well recognised,” said Polakovič. “Unlike Jackson Pollock, who was in some ways destructive and heavy, something that is reflected in his works, Sam Francis was a very optimistic and unflappable man. He liked to listen to music when painting and this is reflected in his works.”

The positive energy of Francis’ work is what captured Meulensteen many years ago.

“More than twenty years ago, my wife Riky and I bought a painting, Blue Balls Trail, by an artist we had never heard of,” Meulesteen writes in the catalogue accompanying the exhibition. “The fresh, positive work spoke for itself and clearly communicated the artist’s energy, creativity and vitality. We gladly acquired it, only learning of the artist’s significance afterwards.”

Blue Balls Trail was one of the one hundred significant works by Francis that was presented in the Danubiana, which covered the individual stages of his career and included the only sculpture he did his whole life. Other exhibited works included his early works from the 1940s while others unveiled his gradual shift to airy, all-over painting lacking a hierarchy of forms. Blue, which became his iconic colour in the 1960s, dominated, but some of the works also demonstrated the artist’s perception of white space, for example the Edge Paintings series.

Curator Eva Trojanová writes in the catalogue: “Sam Francis (1923 – 1994) is one of the greatest personalities of post-war abstract art. His work belongs to the second generation of Abstract Expressionism presenting Post-Painterly Abstraction. Though Sam Francis is categorised in the Action Painting school, his creative philosophy is not quite consistent with this. His forerunners understood art as a means of projecting their own egos, and thus had an inward orientation. Sam Francis saw painting as a way of questioning one’s own ego, a way of asking questions, and had an openness outwards... Intuition played a key role in his work when he considered himself an emotional and intuitive painter, and used this faultless intuition to guide the colour and light on his pictures’ surfaces. Over the decades of his creative activity, he showed exceptional variability in working with colour, light and space.”

Those who missed the chance to get charged up with the positive energy beaming from the works of Francis, who used to say that ‘Colour is light on fire’, can still get an insight into his motivations and energy through the extensive catalogue produced for the exhibition. This weighty book, which, according to Polakovič, has received a very positive acknowledgement from the Sam Francis Foundation, covers all the works that were presented at the Danubiana. The art museum also holds a statue by Francis called simply “The Sculpture” and made from Corten steel, one of only eight in existence.