Slovakia to hold its seventh referendum

THE SIX-QUESTION referendum initiated by the Freedom and Solidarity (SaS) party that will be held on Saturday September 18 will be Slovakia’s seventh exercise of direct democracy. Like most of the preceding referenda, it is not expected to be valid because of insufficient voter turnout. 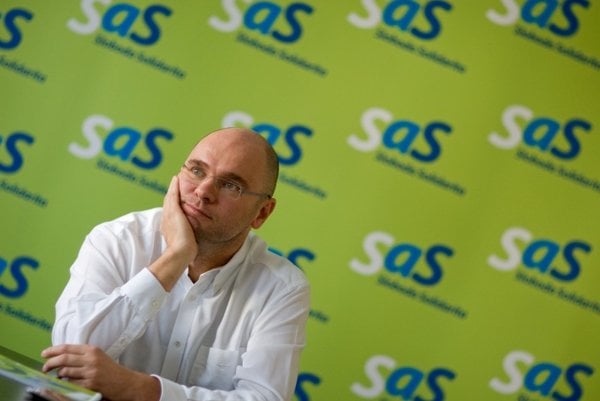 THE SIX-QUESTION referendum initiated by the Freedom and Solidarity (SaS) party that will be held on Saturday September 18 will be Slovakia’s seventh exercise of direct democracy. Like most of the preceding referenda, it is not expected to be valid because of insufficient voter turnout.

Prime Minister Iveta Radičová announced on September 9 that she values the opinion of the 400,000 citizens who signed the petition initiating the referendum and she will vote on September 18.

“It’s true that the parliamentary election changed the situation and several referendum questions became a part of the government’s programme, but it’s also true that the process took place and it’s not possible to disturb it by throwing doubts at the right of our citizens to initiate a referendum,” Radičová said, as quoted by the TASR newswire.

Not every other leader of the ruling coalition has followed her example. Most-Hid chair Béla Bugár said he would take part in the vote but the leader of the Christian Democratic Movement (KDH), Ján Figeľ, said he was not planning to vote. Smer and the Slovak National Party (SNS), the two opposition parties in parliament, recommended that their supporters should ignore the plebiscite.

The first three questions voters will consider are whether parliament should pass a law cancelling mandatory monthly payments that support Slovakia’s public-service media, on limiting the immunity from prosecution that members of parliament enjoy, and whether the number of seats in parliament should be reduced from 150 to 100 for the next election term. The remaining three issues deal with restricting government offices from purchasing cars worth more than €40,000, permitting internet voting in future elections, and excluding persons elected to public office from the right to reply granted under Slovakia’s amended Press Code.

The organisation of the referendum falls under the authority of the Interior Ministry which has been allocated almost €6 million from the state budget to cover the costs of voting. Slovakia’s Statistics Office, responsible for counting of the votes, will get an additional €1.26 million. Altogether the referendum will cost around €7,224,000.

The referendum on EU accession held in May 2003 – a year before Slovakia actually joined the EU – was the only valid plebiscite so far, with a turnout of 52.15 percent of the voters. Four other referenda failed because they did not meet the 50-percent turnout requirement.

The first one, in 1994, concerned proving the origins of one’s financial resources received during privatisation and attracted only 19.96 percent of the voters. Another failed referendum took place in 1998 but it managed to attract over 44 percent of the voters. Citizens were asked whether they agreed with a ban on privatisation of strategic companies. In 2000, the Movement for a Democratic Slovakia (HZDS) and the Slovak National Party (SNS) initiated a referendum on early parliamentary elections but only slightly over 20 percent of the people participated in the vote. And in April 2004, Slovaks had the chance to vote again on early elections again, but only 35.86 percent came to cast their ballot.

Apart from the referenda that failed due to low voter turnout, Slovakia’s history also has a referendum that was thwarted by political manoeuvring. In 1997, the centre-right opposition parties initiated a referendum during the reign of the third government of Vladimír Mečiar demanding the direct election of the president. At that time the parliament also voted to require President Michal Kováč to announce a referendum on Slovakia’s entry to NATO. Additional questions added to that referendum were: Are you in favour of placing nuclear weapons on the territory of Slovakia? Are you in favour of locating military bases on the territory of Slovakia? The fourth question concerned the direct election of the president. That referendum was thwarted by the country’s interior minister, and in effect Mečiar became temporary president and used that period of time to grant amnesties to anyone connected to the abduction of the son of President Kováč to Austria in August 1995.

The very first referendum held in Slovakia, in 1994, shows that SaS was not the first political party to use the idea of a petition campaign demanding a referendum for its own promotion.

Political analyst Erik Láštic of the political science department of Comenius University told The Slovak Spectator that the Association of Workers of Slovakia (ZRS) managed to mount a similar petition campaign for a referendum. It was the 1994 referendum about the declaration of the origins of one’s financial resources received during privatisation. The government at that time managed to keep the referendum from being tied to parliamentary or municipal elections (as happened as well in 2010) so the voter turnout was very low and the referendum failed.

Nevertheless, the public campaign initiated by ZRS helped it to enter parliament and become part of a subsequent ruling coalition with Vladimír Mečiar, opening what many observers call one of the darkest political chapters of Slovakia’s post-revolutionary history.

According to Láštic ZRS launched its petition at a time when the party had only one MP in parliament and was trying to attract the attention of more voters and this is similar to the method used by SaS prior to the June 2010 parliamentary election.