SLOVAKIA’S refusal to support a loan for Greece might give rise to more problems in its relations with other eurozone members than the centre-right government of Iveta Radičová originally thought. Far from dying down, the chorus of criticism from outside Slovakia is continuing, several weeks after the Slovak parliament voted against the loan. Most notably, European Central Bank (ECB) president Jean-Claude Trichet has expressed “outrage” at Slovakia’s defiance, and said that in hindsight the ECB should have blocked Slovak eurozone membership. Slovakia adopted the euro in January 2009. 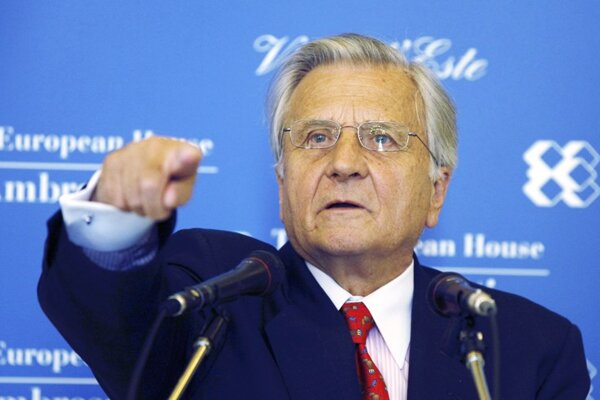 SLOVAKIA’S refusal to support a loan for Greece might give rise to more problems in its relations with other eurozone members than the centre-right government of Iveta Radičová originally thought. Far from dying down, the chorus of criticism from outside Slovakia is continuing, several weeks after the Slovak parliament voted against the loan. Most notably, European Central Bank (ECB) president Jean-Claude Trichet has expressed “outrage” at Slovakia’s defiance, and said that in hindsight the ECB should have blocked Slovak eurozone membership. Slovakia adopted the euro in January 2009.

Slovak government officials say that all they are doing is protecting Slovakia’s legitimate interests. Both Prime Minister Radičová and Finance Minister Ivan Mikloš have assured the public that there is no penalty hanging over Slovakia’s head. While observers agree that legally there are no reasons to impose sanctions on Slovakia, they suggest that European Union countries will find ways to remind Slovakia of its attitude when it is the one seeking EU benefits.

In August, at the recommendation of the Radičová government, parliament decided that Slovakia would not bear any share of the cost of a rescue loan to Greece, and rejected the additional codicils to an agreement signed by the previous government that would have been required if Slovakia were to contribute any cash to the Greek loan. The bilateral loan would have resulted in Slovakia contributing up to €816 million over the next three years. The Europe-wide amount being tabled to prop up the troubled Greek economy now exceeds €100 billion. Parliament did agree to contribute to a larger eurozone stabilisation plan, the European Financial Stability Facility.

The Reuters newswire quoted a memo describing the September meeting of eurozone finance ministers which suggested that Slovakia’s decision had badly upset the ECB chief.

“Trichet was outraged at the last Eurogroup by Slovakia’s refusal of a bilateral loan to Greece and said that had the ECB known Slovakia would behave like that, it would not have endorsed Slovakia's euro adoption,” the memo stated, Reuters reported.

According to Reuters, Trichet also suggested that Slovakia’s actions could affect the chances of future candidates since the ECB would not now back eurozone applicants if there was a risk they would behave similarly.

Although Finance Minister Mikloš confirmed that critical remarks might have been directed at Slovakia at the Ecofin and Eurogroup meetings, he rejected the possibility that Slovakia might be punished when the EU budget for 2014 to 2021 is negotiated and approved. Mikloš said that one minister and representatives of the European Commission, ECB and Eurogroup made critical remarks, according to the SITA newswire.

“They stated their critical stand and disagreement, which is nothing new,” Mikloš said. “We simply have a differing attitude on the loan to Greece.”

Purely legally, there are no reasons to impose sanctions on Slovakia or to launch a specific process that would result in such sanctions, Vladimír Bilčík of the Slovak Foreign Policy Association told The Slovak Spectator.

“Of course, it was a political decision and as such it might have political consequences,” Bilčík said. “How serious could these consequences be? It is hard to predict at this point. Yet there will certainly be some and our diplomats will have to handle those since Slovakia has remained completely alone in its attitude when compared to the stand taken by other member states.”
According to Bilčík, the negative consequences might take different forms: for example, they might be reflected in decisions about diplomatic posts for nominees from Slovakia, or the placement of some future European Union agencies in Slovakia.

The approval of some future projects, transfers of funds to Slovakia, the country’s candidacy to certain posts, or Slovakia’s efforts to access certain benefits might be judged through the prism of Slovakia’s attitude, said Bilčík, adding that none of these things is certain to happen.
Mikloš has stressed that during his talks no one had implied that there might be sanctions.
“At negotiations I attended – and I had a debate with EU Commissioner for Monetary Affairs Olli Rehn – no one has implied anything similar and I would consider it completely unacceptable,” Mikloš has said.

Mikloš also restated that while it is possible the Eurogroup of finance ministers or the European Commission may want to raise the issue in future, the government’s position would not change.
“The information is very fresh and there have been many emotional statements made either by representatives of the member states of the eurozone or leaked from negotiations,” Bilčík said. “Of course Slovakia is now getting into a different position. Until now, it had been viewed as one of the best students in European integration, as well as a country of consensus.”
Bilčík explained that purely statistically, Slovakia is a country which had previously only abstained from voting, or had only rarely voted against majority decisions by EU member countries. The vote on the loan for Greece was a turning point.

“Slovakia’s partners will keep reminding us about this step,” Bilčík said.
According to Bilčík, EU partners might “remind” Slovakia of the issue also during negotiations over the EU budget, though these are multilateral negotiations where everyone is trying to gain something and has to yield.

“I see a larger potential for reminding Slovakia of its stand in the event that there is a bilateral request on the part of Slovakia, or a candidacy by the country,” Bilčík said.
Bilčík does not think that the criticism, especially that coming from the European Central Bank, was entirely empty and he attributes considerable political weight to officials’ words.
He notes that enlarging the eurozone by adding Slovakia had already been a complicated project and that Slovakia’s attitude will now only enforce EU institutions in their conviction that entry criteria need to be toughened.

“New candidates will be judged through the prism of experience with the newest members, such as Slovakia,” Bilčík said.

The decision pushes Slovakia onto the diplomatic defensive and Bilčík suggests that this is “certainly not a very good position to be in”. The analyst adds that he has not yet heard any convincing argument on the part of Slovakia as to why the country rejected the loan.
“Our partners are understandably asking the question: why?” said Bilčík. “Explanations that are linked with some Slovak story and our values appear hard to grasp, especially in the context of the crisis, which is very real and concrete.”

He suggested that referring to internal politics and pre-election battles or the free will of people and their elected officials in parliament is fine, and formally no one can object, but in a wider political context this is something that will hardly convince European partners. As a result, Slovakia’s diplomats will have some more explaining to do, Bilčík said.