Slovakia to 'get luckier' with its Press Code

“YOU CAN have a perfectly written media law if you are lucky – it’s not the case in Slovakia, but I promise it will be,” Prime Minister Iveta Radičová told participants at the annual World Congress of the International Press Institute (IPI) in Bratislava on September 14, and thus sent out a message to the country that its media law, criticised by local journalists but also the international professional community, will soon be subject to change. 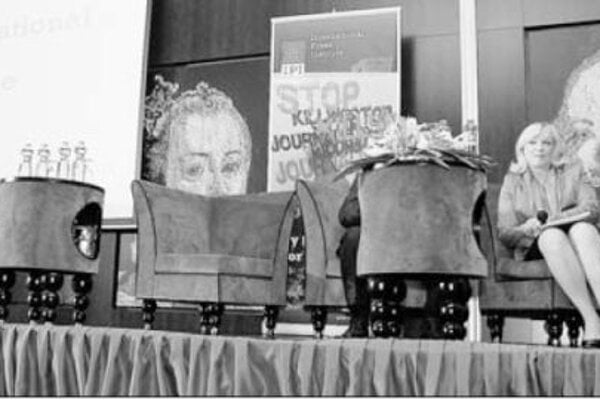 “YOU CAN have a perfectly written media law if you are lucky – it’s not the case in Slovakia, but I promise it will be,” Prime Minister Iveta Radičová told participants at the annual World Congress of the International Press Institute (IPI) in Bratislava on September 14, and thus sent out a message to the country that its media law, criticised by local journalists but also the international professional community, will soon be subject to change.

Speaking to top media professionals from around the world gathered in Bratislava, Radičová also remarked that a well-written media law is inevitable but not sufficient for journalists to be able to do their job professionally.

The Vienna-based IPI, the world’s oldest global press freedom organisation, held its annual World Congress between September 11 and September 14 in Vienna and Bratislava.

The Congress marked 60 years since the founding of the organisation and hosted over 360 participants from 62 countries. Under the title “Thinking the Unthinkable: Are We Losing the News? – Media Freedom in the New Media Landscape” the global gathering discussed the changing media landscape and press freedom issues across the world.

“I encourage you to continue the fight for a world where press freedom is no longer an issue,” said the IPI’s interim director Alison Bethel McKenzie during her opening speech.

Press freedom became an issue in Slovakia after the controversial Press Code was passed in Slovakia in 2008 under the Robert Fico-led government. Speaking to the congress, Radičová thanked the IPI for its clear position towards the law. She mentioned three areas in particular where she sees a need for change in the code: the right to reply, which allows politicians to comment on everything that is reported about them, even if it is completely factually accurate; the harsh sanctions that she believes have led to self-censorship among Slovak media that cannot afford to run the risk of losing a libel lawsuit and thus having to pay high sums in damages to politicians; and strong regulation of the media.

“These are the three things we’d like to change this autumn and I hope the media will then get a better chance to criticise me,” Radičová said.

Apart from promising to look into media legislation in Slovakia, Radičová also offered her opinions on public broadcasting and on journalists’ everyday dilemma between commercial interests and public interests, and she shared her experiences of censorship under the communist regime.

“You are teaching me something very important: to weigh [my] words,” Radičová said on a more personal note to the journalists gathered at the congress. “I think that the way to improve democracy, freedom, tolerance and most importantly human rights for everyone in this world is to weigh [our] words. You have the power to do it, and I wish you success.”

The Bratislava-hosted part of the congress then continued with a panel discussion on covering extremist politicians in the media today entitled ‘Reporting on Extremist Politicians – How New and Traditional Media Cover the Politics of the Extreme’, which included four speakers: Miroslav Lajčák, former international high representative and EU special representative for Bosnia and Herzegovina and foreign minister in Robert Fico’s government; Slovak investigative reporter Sergej Danilov; Hungarian investigative reporter Gábor Miklósi; and the editor-in-chief of the Austrian newspaper Der Standard, Alexandra Foderl-Schmid. The debate was moderated by CNN anchor Jim Clancy, who also hosted the afternoon town hall-style debate summing up what questions had been answered during the congress and what future steps needed to be taken.

They join 52 existing IPI heroes, to make up the full 60 marking IPI’s 60th year, who have defended press freedom around the globe.