Facing up to nuclear station shutdowns

WHEN travelling from Bratislava to Trenčín, drivers on the main highway pass eight cooling towers belonging to one of two nuclear power generating stations in Slovakia, Jaslovské Bohunice. The towers stand in two uniform rows, but four of them no longer release any steam from cooling nuclear reactors. They stopped functioning after Slovakia removed the second block of the V1 nuclear power station from its power grid at midnight on December 31, 2008 in compliance with a commitment it made upon entering the European Union to completely close this ageing power station. 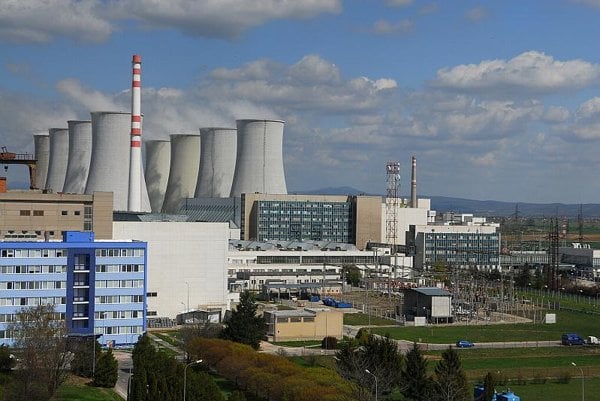 WHEN travelling from Bratislava to Trenčín, drivers on the main highway pass eight cooling towers belonging to one of two nuclear power generating stations in Slovakia, Jaslovské Bohunice. The towers stand in two uniform rows, but four of them no longer release any steam from cooling nuclear reactors. They stopped functioning after Slovakia removed the second block of the V1 nuclear power station from its power grid at midnight on December 31, 2008 in compliance with a commitment it made upon entering the European Union to completely close this ageing power station.

The skyline of Jaslovské Bohunice will change even more dramatically when all four cooling towers as well as all other facilities belonging to the V1 are completely removed under a decommissioning process managed by Jadrová a Vyraďovacia Spoločnosť, Slovakia’s nuclear decommissioning company – known by the acronym JAVYS. The entire process is expected to last approximately 15 years.

“Now we are in the phase of termination of operation,” Dobroslav Dobák, the spokesperson of the state-controlled JAVYS, told The Slovak Spectator, explaining that the decommissioning process could not be started immediately after the nuclear power station was disconnected from the power grid, noting that “inside there is still fuel and the system must ensure its safety”.

V1 in Jaslovské Bohunice was the second nuclear power station built in Slovakia. It consisted of two pressurised water reactors of the VVER type with an installed capacity of 440 MW and a cooling system consisting of four towers. Construction of the facility started in 1972 and the first and second blocks were connected to the power grid in 1978 and 1980. Another nuclear power station, V2, also consisting of two reactors of the VVER type was subsequently built next to V1.

Slovakia committed itself to close down and decommission V1 in 1999, prior to its accession to the EU, under pressure from neighbouring Austria, which had threatened to block Slovakia's EU aspirations unless the reactors were shut down ahead of their scheduled decommissioning date. Even after extensive upgrading of V1 completed in 2000, Slovakia promised to disconnect the two blocks of the V1 nuclear power station from the power grid in 2006 and 2008, respectively, and this is what it did. During its total operation V1 generated 155,459 GWh of electricity, according to JAVYS.

JAVYS, whose history dates back to the privatisation of Slovenské Elektrárne (SE), is responsible for the whole decommissioning process. In addition to managing spent nuclear fuel and other radioactive waste, JAVYS is also responsible for managing the nuclear facilities that the Italian energy company Enel, which now owns a 66-percent share in SE, did not purchase.
A special fund to pay for the decommissioning preparation process of V1, the Jaslovské Bohunice International Decommissioning Support Fund, was established in 2002 with funds from the European Union.

The administrator of the fund is the European Bank for Reconstruction and Development and financing of decommissioning preparation activities is undertaken in the form of grant contracts. But Dobák of JAVYS pointed out that other related activities, such as a change in the switchyard line within the facility, are also financed from the fund.

“We are now preparing all the documents to be submitted to the regulatory body, the Nuclear Regulatory Authority of the Slovak Republic (ÚJD) to apply for the decommissioning licence,” said Dobák. “We hope that next year we can start decommissioning V1.”

“Under the decommissioning plan, we will completely dismantle and demolish all the facilities and buildings,” said Dobák.

While the total costs for V1 decommissioning were first calculated to be €580 million, they are now the subject of further analyses by Slovakia’s Economy Ministry.

“Currently, the costs of decommissioning are a matter of analyses based on experiences with decommissioning similar types of power stations in Europe,” the SITA newswire wrote, citing the Economy Ministry in June. But the ministry added that handling all the radioactive waste at the site will also be a specific and considerable financial burden of the process and that these costs will exceed several times the costs of the decommissioning itself.

V1 is not the only nuclear power station in Slovakia in the process of being completely dismantled. The first nuclear facility constructed in Slovakia, the A1, is also in Jaslovské Bohunice and it is now undergoing decommissioning under the supervision of JAVYS. A1 experienced a significant nuclear incident in 1977 and its operations were not resumed after the event. The A1 was designed as a test reactor to verify the possibility of using natural uranium as a fuel for energy production. Construction of A1 started in 1958 and it was connected to the power grid in late 1972.

But design shortcomings caused various safety incidents and the A1 unit operated for only five years. An incident in 1977 when one fuel rod caused the overheating of the reactor core ended its operation completely. This was the second serious safety incident at A1: in 1976 a fuel assembly ‘shot off’ during a fuel exchange, claiming two lives.

“After the second incident it was evaluated whether to repair A1,” said Dobák. “It was decided instead to decommission it.”

Dobák stated that in the late 1970s there was little detailed knowledge about the decommissioning process and neither experts nor the reactor were prepared for decommissioning to begin, as A1's operations had been halted due to an unexpected incident. Currently, decommissioning is ongoing at the A1 with a plan to complete it by 2033. The process is now in the phase of decommissioning low-level radioactive parts of the main generating units.

“It is different compared with the V1 since the A1 ended operations with an accident and closure of V1 was a planned, prepared process,” said Dobák, explaining why decommissioning of V1 is expected to take less time than A1. “Closure of the V1 has been a controlled process from its very beginning.”