Biomass on the rise as an energy source in Slovakia

BIOMASS is becoming a more popular renewable energy source in Slovakia and more and more local heating plants are announcing replacement of their obsolete technology with modern biomass-incinerating equipment. They are making use of Slovakia’s huge capacity for production of biomass itself as well as for manufacturing biomass products adapted for further energy usage. But experts warn that even though biomass may have positive impacts on general regional development not all usage of biomass is environmentally friendly. 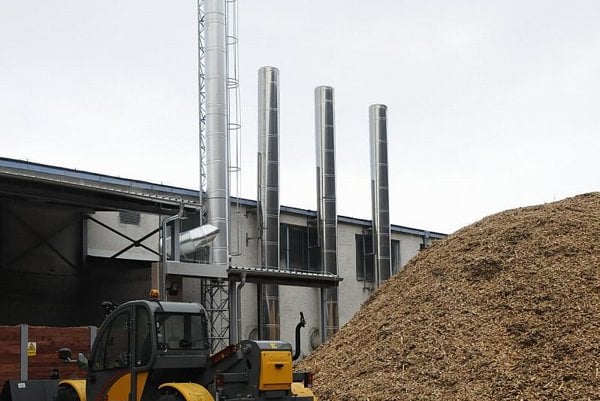 BIOMASS is becoming a more popular renewable energy source in Slovakia and more and more local heating plants are announcing replacement of their obsolete technology with modern biomass-incinerating equipment. They are making use of Slovakia’s huge capacity for production of biomass itself as well as for manufacturing biomass products adapted for further energy usage. But experts warn that even though biomass may have positive impacts on general regional development not all usage of biomass is environmentally friendly.

In Slovakia the most commonly used forms of biomass are currently chopped wood, woodchips and wood in the form of pellets or briquettes. But biomass also includes waste from agricultural production, for example reeds and animal excrement, or bilge produced by wastewater treatment plants or waste collected from households. These sources are still underused in Slovakia and are waiting to be more widely exploited. The cultivation of special plants specifically to produce industrial biomass is only just beginning in Slovakia.

“The usage of biomass has been increasing in Slovakia,” Ladislav Židek, general director of Biomasa, an association supporting the use of biomass in Slovakia, told The Slovak Spectator. “What is very important is that the gas crises have probably frightened our citizens in the end. On the other hand, we believe that during an [economic] crisis people save more and use more effective sources of energy. This is why the number of buyers of wood pellets has been increasing in Slovakia.”

“Biomass, either agricultural or forest-sourced, represents from an economic and ecological point of view the most appropriate and effective renewable source of energy under the natural conditions of Slovakia and with regards to its existing energy infrastructure, i.e. central heating systems in towns and villages,” Karel Hirman, the director of the Energy Policy Section at the Slovak Innovation and Energy Agency (SIEA), told The Slovak Spectator. “Unlike photovoltaic – i.e. solar – power stations and wind, biomass is a predictable source, which can be regulated.”

Hirman further stressed that using biomass for energy generation does not require construction of back-up power plants, mostly built on the basis of natural gas, as is the case for less predictable renewable sources. All this means that biomass reduces Slovakia’s dependence on imports of fossil fuels.

Slovakia recognises biomass as an energy alternative to non-renewable fossil fuels and increasing the share of renewable sources for production of electricity and heat with the aim of creating appropriate supplementary sources needed to cover local demand is one of the basic priorities of the 2006 Energy Policy of Slovakia.

“The increase in the prices of non-renewable fossil fuels… has pushed biomass as an energy alternative to the centre of economic as well as political attention,” Juraj Novák from the Ministry of Economy and Construction told The Slovak Spectator. “In the segment of heat production a significant increase in its usage has been registered over the last few years. This is a precondition for biomass to become the most used renewable energy resource in Slovakia in future years as well.”

Novák specified that biomass currently generates up 3 percent of the total energy consumed in Slovakia, but said there is potential for this to increase.

“The total potential of biomass currently represents the possibility to cover more than one half of heating needs,” said Novák. “Biomass has huge potential in heat production, especially in [area] central heating systems, but less in households, in the forms of pellets, briquettes, woodchips and reeds.”

Pellets are more expensive when compared with chopped wood and woodchips, but provide advantages, for example in the form of automatic boiler operation and ease of use comparable to that of natural gas, according to Novák. Moreover, there is significant capacity for production of pellets and briquettes in Slovakia, and producers are currently exporting most of what they make. This, according to Novák, guarantees that even the quickly growing number of biomass boilers will not mean a potential shortage of this kind of fuel.

Experts agree the energy potential of biomass is still little-used in Slovakia, and argue that wider usage would lead to higher employment and improved income for forestry companies and farmers, thus contributing to general regional development.

“Usage of biomass has a multiplier effect,” said Hirman. “It creates new jobs in locations which usually have a problem achieving this, especially for low-qualified people. It creates local vertically integrated energy networks in which production and usage of biomass as well as energy produced from it remains in one place. This reduces energy prices for consumers in the locality. It also widens the business portfolio of local farmers and forest managers. And, last but not least, usage of biomass has a positive impact on maintenance and meaningful usage of the country, for example regular cutting of grass on meadows and pastures, suitable composition of agricultural plants, etc.”

Vojtech Hollan, spokesperson for the Energy Centre, a non-governmental consulting organisation which promotes the rational use of energy and utilisation of renewable sources of energy agrees, saying that a positive feature of the concept of biomass as a local energy source is that money paid for heat remains in the region, i.e. in the heating plant, forestry companies, farmers or producers of wood pellets and briquettes.

Among the advantages of biomass in regional development Židek points especially to its contribution to local employment.

“All working places [created as part of the production and usage of biomass] are stable, permanently sustainable and are created directly in the regions,” said Židek. “If Slovakia follows Austria’s trend, over four years 10,000 permanently sustainable jobs can be created with significantly lower costs than [would be] required by – and paid to – foreign investors.”

Hirman regards the retention of existing area central heating systems as a precondition for extensive and effective usage of biomass.

“However, here our agency often encounters opposing tendencies,” said Hirman, adding that especially at the level of local administrations, towns and villages are adopting decisions which go against the effective development of area central heating systems.

Experts warn that heedless usage of biomass does not necessarily contribute to a better environment, stressing that biomass is primarily a local source.

“As long as biomass remains a local source it will also be an environmentally friendly source of energy,” Hollan told The Slovak Spectator, pointing out that extensive use of biomass in thermal power stations can lead to environmental problems related to transport of biomass from more remote regions.

Novák, who sees incineration of biomass together with fossil fuels in thermal power stations and during the combined production of heat and electricity as a way to achieve higher usage of biomass, also thinks that logistics costs should be monitored.

Another problem of using biomass can lay in obsolete heating systems installed in family houses which incinerate biomass directly, according to Hollan. This may lead to worsening of local atmospheric quality under bad dispersal conditions. Židek sees usage of lower-quality chopped wood as non-ecological and says people only rarely invest in economical and ecological boilers.

Even though Slovakia has recently adopted new legislation supporting use of biomass and other renewable sources via feed-in tariffs for energy produced from renewable resources, not all the parties involved are happy with this means of support.

Židek sees the guaranteed feed-in tariffs as deforming the market. According to him, they were set at too high a level, attracting investors interested only in high profits and not in supporting the usage of renewable energy sources.

Hirman and Hollan also see space for improvement on the side of price regulation.

While biomass has become a popular fuel, there are still some as-yet unused segments of the biomass market. Hollan sees large potential in agricultural biomass, especially reeds. Slovak research institutes are also working on fast-growing trees and plants, even though their impact on biodiversity may be problematic. Another promising option not fully exploited so far is the production of biogas.