UNDER a renewed call for the EU to reassess its stance towards nuclear energy, the Mochovce nuclear power plant in Slovakia hit a milestone on September 7 when Slovenské Elektrárne (SE), the country’s primary power producer, completed installing the pressure vessel for the third nuclear reactor at its Mochovce power generation facility. 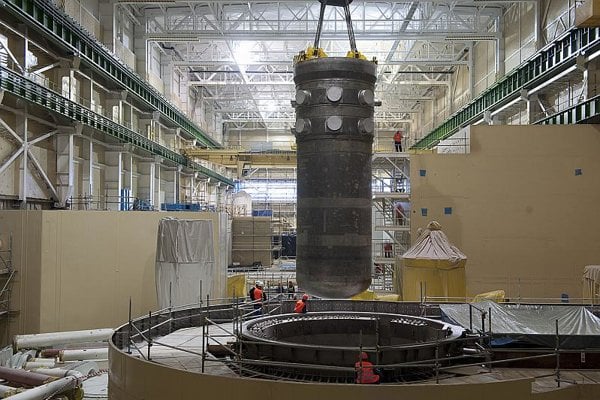 UNDER a renewed call for the EU to reassess its stance towards nuclear energy, the Mochovce nuclear power plant in Slovakia hit a milestone on September 7 when Slovenské Elektrárne (SE), the country’s primary power producer, completed installing the pressure vessel for the third nuclear reactor at its Mochovce power generation facility.

“The successful installation of the pressure vessel confirms that we are on track to fulfil our commitment to complete Mochovce, the largest investment ever made by a private investor in the history of Slovakia,” said Paolo Ruzzini, CEO and chairman of the board of directors of Slovenské Elektrárne, in a press release. “Through the completion of Mochovce we will strengthen the country’s security of energy supplies while maintaining the highest standards applied by the nuclear industry around the world”.

The pressure vessel, which must contain the nuclear fission reaction and resulting pressure and high temperatures over the plant’s lifetime, was manufactured by the Czech company Škoda JS.

The Czech company had actually shipped the pressure vessel 20 years ago, according to the ČTK newswire. Its delayed installation was a result of changes in Slovak society after the fall of the communist regime and a shortage of funds, which caused a suspension of the Mochovce project originally launched in 1981. In the interim period, Slovenské Elektrárne was privatised, with Enel of Italy acquiring a 66-percent ownership stake in the company.

Slovakia’s Nuclear Regulatory Authority (ÚJD) said that the ravages of time have not caused damage to the pressure vessel. ÚJD director Marta Žiaková stated that the more- than-200-ton vessel meets current safety requirements. ÚJD has thoroughly inspected the pressure vessel, one of the most important components of a nuclear reactor, and said inspections should be repeated every four years.

“One should realise that this component was produced to serve over the long term,” said Žiaková, as cited by ČTK.

According to Škoda JS company, the life-span of the pressure vessel can be up to 60 years.


“The vessel was supplied many years ago, indeed, but the inspection has showed that it is in perfect condition,” said Miroslav Fiala, director of Škoda JS, as cited by ČTK.

SE used the delay in completion of the third and fourth units of Mochovce to improve safety and performance design parameters for the company’s second two units.

“The third and fourth units are maybe half a generation further along,” said Robert Holý, the head of the communications department for SE’s nuclear power stations, as reported by the TASR newswire. “The first and second blocks were put into operation in 1998 and 2000. Now we have 10 more years’ experience and thus the initial project was improved and it now includes certain systems which correspond with current safety standards.”

SE plans to put the third unit of Mochovce into operation at the end of 2012 and the fourth unit is scheduled to come online in 2013. Both will contain VVER/V213 reactors with an installed capacity of 440 MW each. Each unit will have a power output of 471 MWe, up from the originally planned 436 MWe. Once completed, the four units in the Mochovce complex will meet as much as 45 percent of Slovak power consumption, SE said. Its overall investment to complete Mochovce amounts to €2.8 billion.

Currently there are over 2,000 workers on-site and their number will grow to 4,000 at the peak of construction, according to SE. After units three and four are up and running the facility will employ an additional 250 highly skilled operational professionals.

After units three and four are completed in Mochovce, there will be six nuclear reactors generating power in Slovakia, all owned by SE: the four in Mochovce, known as EMO, and two, known as V2, in Jaslovské Bohunice.