SLOVAKIA’s seventh referendum, which took place on September 18, did not end up as a fiasco, according to Richard Sulík, the chairman of the Freedom and Solidarity (SaS), who had feared that it might turn out that way. Many more voters that the 400,000 people who had signed the petition to initiate the referendum turned out to vote – in the end more than a million citizens went to the polls on Saturday. Nevertheless, this represented less than 23 percent of all registered voters and the referendum is officially not valid as a turnout over 50 percent is required for a plebiscite to be binding in Slovakia. 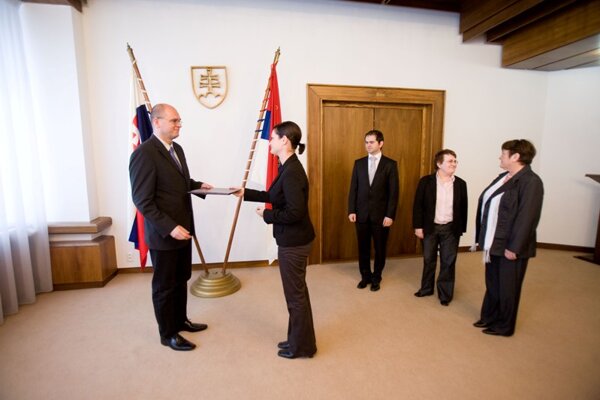 Richard Sulík receives the offical results of the referendum from the Central Commission for Referendum. (Source: SITA)
Font size:A-|A+

SLOVAKIA’s seventh referendum, which took place on September 18, did not end up as a fiasco, according to Richard Sulík, the chairman of the Freedom and Solidarity (SaS), who had feared that it might turn out that way. Many more voters that the 400,000 people who had signed the petition to initiate the referendum turned out to vote – in the end more than a million citizens went to the polls on Saturday. Nevertheless, this represented less than 23 percent of all registered voters and the referendum is officially not valid as a turnout over 50 percent is required for a plebiscite to be binding in Slovakia.

Sulík said in the aftermath of the referendum that it was a great success that 23 percent of Slovak voters took part in the vote, adding that at least a million voters have shown that they care about the future of Slovakia and did not allow politicians to manipulate them.

“I’m convinced that the results of the referendum, even though it is not valid, are binding for politicians,” Sulík said, as quoted by the TASR newswire.

After the results had been published SaS offered thanks to the almost million voters who took part in the referendum via the political party’s Facebook page. “After all the parliamentary parties ignored the referendum and the ‘comrades’ from Smer even discouraged [people], we perceive one million voters to be our sympathisers.”

Voters considered six questions in the referendum. The first three questions concerned whether parliament should cancel mandatory monthly payments that support Slovakia’s public-service media, whether to limit immunity from prosecution for members of parliament and whether to reduce the number of seats in parliament from 150 to 100 beginning from the next election term. The other three issues dealt with restricting government offices from purchasing cars worth more than €40,000, permitting internet voting in future elections, and excluding persons elected to public office from the right to reply granted under Slovakia’s amended Press Code.

Click here to see the results of the referendum.

Sulík appreciated the fact that Prime Minister Iveta Radičová and President Ivan Gašparovič voted in the plebiscite. On the other hand he said he was sorry that the biggest parliamentary party, the opposition Smer party, did not support the referendum.

Opposition says it was a waste of money

“The low turnout of voters has confirmed the uselessness of this referendum and an ineffective use of financial resources of over €7 million,” Smer leader Robert Fico stated in his reaction to the referendum. He also accused SaS of fraud in the campaign, saying that their behaviour has “significantly harmed the institution of referendum [votes] for the future”.

Fico said he was specifically referring to the fact that SaS used his name during the campaign. Billboards paid for by SaS stated that “Fico will take part in the referendum too”, even while Fico claimed he would not vote and eventually did not do so. SaS’ Richard Sulík said that Fico had previously told him that he would vote in the referendum.

President Ivan Gašparovič concealed until the last moment whether he would or would not vote in the referendum. He arrived to vote in a Bratislava polling place only 10 minutes before it closed and after some media had already reported that he had not taken part in the referendum.

Prime Minister Iveta Radičová voted in the referendum as she had previously announced she would do. She told the media that the key question of the referendum was the one that would limit immunity of MPs.

“We need the support of the citizens because I’m realising that opposition MPs have a serious problem with limiting immunity,” Radičová said, as quoted by TASR, adding that through a referendum citizens can recommend to politicians how they should behave.

“Despite the invalid referendum, the turnout of almost a million citizens and their agreement with, for instance, limiting immunity of MPs is a confirmation of the mandate for putting forward those measures in the referendum into the programme statement of the government,” Radičová wrote in her reaction to the referendum results.

However, Radičová’s Slovak Democratic and Christian Union (SDKÚ) party did not give any official public recommendation to its members and sympathisers about the referendum and the leader of the Christian Democratic Movement (KDH) had said prior to the referendum that he would not vote. Both parties are part of the four-party governing coalition.

KDH chairman Jan Figeľ had said prior to the balloting that most of the issues in the referendum were already part of the government’s programme statement.

“It was clear in advance that the referendum was going to fail,” Figeľ said, as quoted by the TASR newswire, but adding that the result of the referendum is a clear sign for politicians to act, especially regarding the issue of immunity for MPs.

The only coalition partner, other than SaS which had initiated the referendum, to directly recommend that its voters participate was Most-Hid party, whose chairman Béla Bugár said he was nicely surprised by the turnout exceeding 20 percent.

“Most of the citizens who turned out voted ‘yes’ [on the six questions],” Bugár said, as quoted by TASR. “I believe that might not be binding, but it shows the will of almost a million voters and that’s not negligible.” Bugár said members of parliament should respect the will of citizens as expressed in the referendum.