THE SUPREME Audit Office (NKÚ ) will look into deals that have been making print press headlines over the past couple of weeks and have heated up the situation in Slovakia’s ruling coalition. The audit authority’s scrutiny means that for now Martin Chren, nominated by Freedom and Solidarity (SaS) as state secretary (i.e. deputy minister) at the Ministry of Economy, and Ivan Švejna, nominated by Most-Híd as state secretary at the Ministry of Transport will keep their positions. The heads of both individuals will however roll if the deals that Hayek Consulting, the company which they co-owned, manufactured with the current government as well as its predecessor, display irregularities, or are found in violation of the procurement rules. 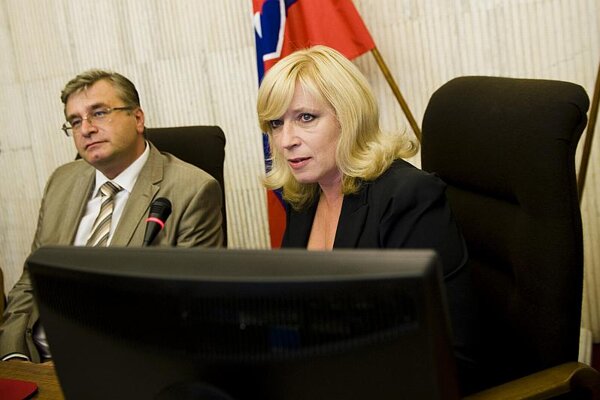 THE SUPREME Audit Office (NKÚ ) will look into deals that have been making print press headlines over the past couple of weeks and have heated up the situation in Slovakia’s ruling coalition. The audit authority’s scrutiny means that for now Martin Chren, nominated by Freedom and Solidarity (SaS) as state secretary (i.e. deputy minister) at the Ministry of Economy, and Ivan Švejna, nominated by Most-Híd as state secretary at the Ministry of Transport will keep their positions. The heads of both individuals will however roll if the deals that Hayek Consulting, the company which they co-owned, manufactured with the current government as well as its predecessor, display irregularities, or are found in violation of the procurement rules.

The Supreme Audit Office’s scrutiny is the solution that Prime Minister Iveta Radičová has offered for the mounting tension within the ruling coalition on September 24. The state secretaries and their nominating parties have called media coverage of the contracts artificially-created stories designed to discredit them.

Hayek Consulting, when it was apparently still co-owned by Chren and Švejna, signed a €8,100 contract with the National Agency for Small and Medium-Sized Businesses, part of the Ministry of Economy, only a few days after both individuals were appointed to their government positions. In mid August, local media reported that Chren and Švejna had terminated the state contract on behalf of the consulting firm.

Under the previous government, the company had competed for several Finance Ministry contracts along with firms that the Sme daily reported were on friendly terms with Hayek Consulting.

On September 24, Radičová said in an official release based on legal analysis, that by signing the deal in July of this year, no laws have been violated. Despite this, in relation to state secretary Martin Chren, one has to talk seriously about conflict of interest.

According to the release, several deals signed by state institutions with Hayek Consulting under the previous government have evoked suspicion.

“So that such doubts do not emerge, my government have passed several measures, which are to increase transparency of public procurement and the use of public funds,” the statement reads. “I remind that it was this government, which published the deals and made public control possible.”

According to Radičová, if the NKÚ does not declare unambiguous transparency and effectiveness of these contracts she would decide whether both state secretaries have to step down.

Radičová had been pressing the party leaders of SaS and Most-Híd over the past two weeks to take a clear stand about what they will do regarding their nominees. Thus far both SaS and Most-Hid have said they continue to back their nominees to the state posts.

On September 23 it appeared that Most-Híd had reached a definitive conclusion that it would not take action to sack its nominee. The fate of Chren, who was serving as state secretary at the Economy Ministry at the time the deal was signed, was still in limbo.

The opposition Smer party called on Radičová and Speaker of Parliament Richard Sulík, the chairman of SaS, to sack Chren and Švejna over what Smer called a “scandalous state commission” given to Hayek Consulting.

The Hayek Foundation, to which Hayek Consulting was affiliated, charged that it had become a target of a purpose-driven political campaign and that this has been damaging its reputation. The board of the foundation said it will take legal steps because of what it called purposeful editing of information and unwillingness on the part of the media to present objective information, Sme reported.

Smer boss Robert Fico said that the situation around the Hayek contracts will soon show whether Radičová is strong or whether she only serves as a spokeswoman for the government, a prime minister without any influence. Fico said that if Radičová is strong, she would sack not only Chren and Švejna but also Economy Minister Juraj Miškov, a SaS nominee.
Radičová responded on September 22 that Fico does not have a right to call on her to take action in the Hayek case.

“Will we be paying for the criteria set for handling public finances in the past,” she asked, as quoted by SITA. “Who set the criteria for the redistribution of public finances based on murky commissioning of projects right at the beginning? Who has failed to publish contracts?”

Fico has no right to comment on this topic, Radičová added, since “what we are solving today is the consequence of the established criteria against which he took no action”.

Sulík earlier said that the €8,100 contract should not have been signed in the first place but that “as soon as Chren found out about it, he cancelled it”. Sulík said Chren behaved honestly and he does not see any reason for Chren’s dismissal from the state post. Sulík added that it is logical for the Hayek Foundation, which provides analyses of the business environment, to try to obtain government contracts.

“I see nothing wrong about it,” Sulík said, as quoted by the TASR newswire. “The only problem could be if those commissions were overpriced, obtained by bribery, or were in violation of the law, and in these terms I say everything was okay.”

Chren has rejected the accusations and said that the charges of scandalous behaviour were being built to discredit him. He said that after he took the government position he ended his affiliation with Hayek Consulting and the Hayek Foundation.

“During my tenure at the post of state secretary, no financial fulfilment [of a contract] between Hayek Consulting and any institution under the Economy Ministry has ever taken place,” Chren said as quoted by Sme.

Chren rejected any suggestion that Hayek Consulting had participated in anything like a ‘bulletin-board tender’ referring to a previous scandalous tender in Slovakia that was published only on an internal ministry bulletin board. Chren said Hayek Consulting had won a number of tenders but none of those had been published solely on a bulletin board, the TASR newswire wrote.

“All of the public tenders went in accordance with the laws of this country, being published even beyond the extent specified by law,” Chren said.