SLOVAKIA’s seventh referendum, which took place on September 18, did not end up as a fiasco, according to Richard Sulík, the chairman of the Freedom and Solidarity (SaS), who had feared that it might turn out that way. Many more voters than the 400,000 people who signed the petition to initiate the referendum turned out to vote – in the end just under a million citizens went to the polls on September 18. 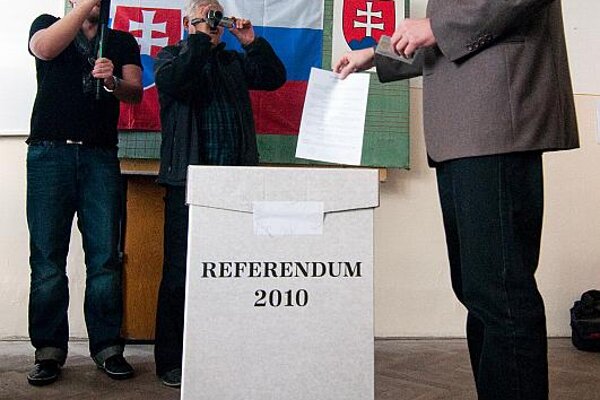 SLOVAKIA’s seventh referendum, which took place on September 18, did not end up as a fiasco, according to Richard Sulík, the chairman of the Freedom and Solidarity (SaS), who had feared that it might turn out that way. Many more voters than the 400,000 people who signed the petition to initiate the referendum turned out to vote – in the end just under a million citizens went to the polls on September 18.

Nevertheless, they represented less than 23 percent of all registered voters and the referendum is not officially valid as a turnout of more than 50 percent is required in Slovakia for a plebiscite to be binding.

Sulík said in the aftermath of the referendum that it was a great success that 23 percent of Slovak voters took part in the vote, adding that at least a million voters have shown that they care about the future of Slovakia and did not allow politicians to manipulate them.

“I’m convinced that the results of the referendum, even though it is not valid, are binding for politicians,” Sulík said, as quoted by the TASR newswire.

Political analyst Grigorij Mesežnikov said that since the referendum was not binding it could not be considered as a success for the entire society but that the initiators of the referendum could certainly consider it successful.

“SaS can rightfully view it as its political success since they managed to mobilise almost a million people [to vote] in the context of a lukewarm attitude by its coalition partners and anti-referendum propaganda from the opposition parties,” Mesežnikov told The Slovak Spectator.

According to official results presented by the Central Commission for Referendum on September 19, only 22.84 percent of voters turned out to answer the six referendum questions. Each voter was required to answer at least one of the six questions in order for his or her ballot to be valid.

The first question, whether the mandatory monthly payments that support public-service broadcasters should be cancelled, was answered positively by 87.24 percent of those who voted, while 9.02 percent said no. On the question of limiting MPs’ immunity from prosecution, 95.40 percent voted to do so while 1.73 percent voted against the change. The third question, on lowering the number of MPs from the current 150 to 100 for the next election term, was approved of by 92.76 percent of voters, while 3.85 percent voted against the idea.

The fourth question asked whether the price of official cars bought by public bodies should be limited to less than €40,000. This question got a positive response from 88.84 percent of voters, while 6.16 percent said no. Regarding internet-based voting for national and European election, 70.46 percent agreed that online voting should be introduced and 22.22 percent did not agree. On the last question 74.93 percent of voters agreed with the idea of excluding those holding public office from using the right to reply under the Press Code and 13.44 percent of voters disagreed.

Opposition dismisses vote as a waste of money

Sulík appreciated the fact that Prime Minister Iveta Radičová and President Ivan Gašparovič voted in the plebiscite. On the other hand he said he was sorry that the biggest parliamentary party, the opposition Smer party, did not support the referendum.

“The low turnout of voters has confirmed the uselessness of this referendum and the ineffective use of financial resources of over €7 million,” Smer leader Robert Fico stated in his reaction to the referendum. He also accused SaS of fraud in the campaign, saying that its behaviour has “significantly harmed the institution of referendum [votes] for the future”.

Fico said he was specifically referring to the fact that SaS used his name during the campaign. Billboards paid for by SaS stated that “Fico will take part in the referendum too”, even while Fico claimed he would not vote and eventually did not do so. SaS’ Richard Sulík said that Fico had previously told him that he would vote in the referendum.

President Ivan Gašparovič concealed until the last moment whether he would or would not vote in the referendum. He arrived to vote in a Bratislava polling place only 10 minutes before it closed even though his spokesperson had told the TASR newswire only a few hours earlier that the president would not take part in the referendum because he did not wish to promote the political party that had initiated the referendum.

Mesežnikov considered the attitude and action of the president to be alibi-seeking and opportunist.

“He behaved in line with his political qualities and his profile; maybe even his psychological profile,” Mesežnikov said. “He did not help in adding to the reputation of his post, he did not behave as a head of state.”

Prime Minister Iveta Radičová voted in the referendum as she had previously announced. She told the media that the key question of the referendum was the one that would limit the immunity of MPs.

“Despite the invalid referendum, the turnout of almost a million citizens and their agreement with, for instance, limiting the immunity of MPs is a confirmation of the mandate for putting forward those measures in the referendum into the programme statement of the government,” Radičová wrote in her reaction to the referendum results.

However, Radičová’s Slovak Democratic and Christian Union (SDKÚ) party did not give any official public recommendation to its members and sympathisers about the referendum and the leader of the Christian Democratic Movement (KDH) had said prior to the referendum that he would not vote. Both parties are part of the four-party governing coalition.

But the leaders of all the coalition parties spoke in one voice after the results of the referendum were announced, saying that politicians should take seriously the opinion of the nearly one million of voters who participated in the plebiscite.

Mesežnikov remarked that the campaign preceding the referendum was insufficient, saying that the only activities that resembled campaigning came from SaS, which tried to mobilise voters with billboards and flyers around Slovakia. But Mesežnikov argued that this was a lukewarm political campaign.

“SaS was the only one to lead a limited campaign, other parties did not take part in it,” Mesežnikov said. “Now and then they sent a signal about their attitudes.”

On the other hand, he said that the campaign against the referendum mounted by the opposition parties, particularly by Smer, as well as the statements and behaviour of the president, helped to demobilise some segments of the voting population.

However, Mesežnikov said he would not have expected the referendum to attract enough voters to be valid even if there had been a real campaign with the participation of all the governing coalition parties and perhaps even with support from the opposition.

“I can imagine the turnout could have been 15 to 20 percent higher, but I am still sceptical that it would have gotten over the 50-percent threshold,” he said.