Pensioners to feel the squeeze too

SENSITIVE but necessary: this is how Slovakia’s labour minister described the changes he has proposed that will affect the country’s one million pensioners. The government did not spare senior citizens when preparing its grand austerity package designed to reduce the country’s public finance deficit as the cabinet of Iveta Radičová approved a draft amendment to the law on social insurance on September 22 which will change the method by which annual increases in pensions will be calculated in the future. 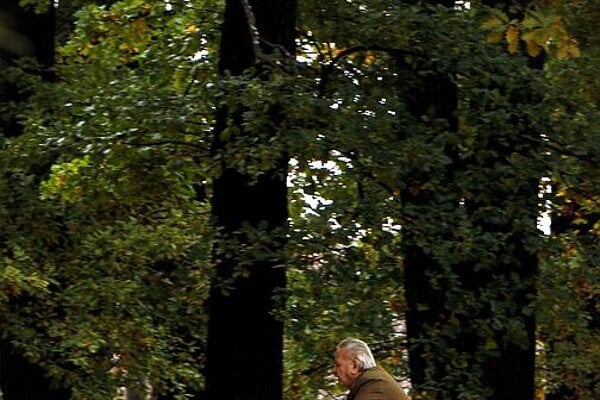 SENSITIVE but necessary: this is how Slovakia’s labour minister described the changes he has proposed that will affect the country’s one million pensioners. The government did not spare senior citizens when preparing its grand austerity package designed to reduce the country’s public finance deficit as the cabinet of Iveta Radičová approved a draft amendment to the law on social insurance on September 22 which will change the method by which annual increases in pensions will be calculated in the future.

This modified valorisation method, which will likely provide smaller annual increases for pensioners, is not the only change that Slovakia’s current and future retirees may need to swallow. The government has also proposed a ban on people earning wages at the same time they draw an early retirement pension.

Slovakia’s pensioners’ association has called on the government to preserve the current model for calculating annual pension increases and said that one of the country’s most vulnerable groups is being targeted by the government. Trade unions have not expressed any enthusiasm for the cabinet’s plan either.

The government has argued that the changes are needed to plug a budget gap in the accounts of the country’s social insurer, Sociálna Poisťovňa.

Beginning in 2012 pensions provided by Sociálna Poisťovňa will be increased by a fixed sum, rather than on a percentage basis, which will be based on the annual inflation rate calculated by Slovakia’s Statistics Office for the first six months of the previous year applied to the average old-age pension on June 30 of the past year. Currently the annual increase in old-age pensions is calculated based on the inflation rate and the average rate of growth of wages in the national economy.

The proposed new calculation method would be used to determine a fixed, flat annual increase in all old-age, early retirement and disability pension benefits. Survivor pensions would be increased by only 60 percent of the fixed sum and orphan pensions by 40 percent of the calculated flat amount. Based on the current calculation method, pensioners will receive an increase of 1.8 percent in 2011 based on the amount of their personal pension, rather than a fixed sum based on the average pension.

Labour Minister Jozef Mihál, a nominee of Freedom and Solidarity party, said his proposed change will reduce pension expenditures by €150 million annually and that these savings are needed to mend holes in Sociálna Poisťovňa’s budget.

The Confederation of Trade Unions (KOZ) told The Slovak Spectator that “it fundamentally disagrees with the proposed model since it would result in a continuous drop [in the value] of pensions compared to the actual level of wages and with that a further drop in the purchasing power of citizens in their post-productive age.”

Prime Minister Iveta Radičová said that making the change will end a growing gap between the amounts received by higher and lower pension recipients, stating that her government is strengthening solidarity in the social insurance system. She said the change in the valorisation method to an annual flat sum will help pensioners with lower monthly benefits.

Representatives of pensioners disagreed, however, and insisted that the current model be preserved.

“We fundamentally disagree with the whole [proposed] model of valorisation and we are unambiguously for preserving the current, so-called Swiss model when half of the rate of valorisation is calculated from growth in inflation and half is based on growth in the average wage in the national economy,” Kamil Vajnorský, the head of the Slovak Union of Pensioners, told The Slovak Spectator.

With the proposed change in valorisation based solely on the inflation rate the relationship between pensions and wage growth would be lost, Vajnorský said. He added that because of Slovakia’s membership in the European Union, the inflation rate is unlikely to exceed 3 percent.

Vajnorský said that prices for goods and services in Slovakia have already climbed almost as high as in other EU countries while wage levels here still fall significantly behind those countries.

“There is an assumption that after the economic crisis ends, wages will be growing more dynamically,” Vajnorský said. “In that situation, the real value of pensions in Slovakia compared to wages would drop [under the proposed change].”

Vajnorský maintains that linking the growth in wages to retirees’ pension levels is a necessity.

Otto Ewiak of KOZ said that increasing pensions only by the inflation rate applied to the average amount of an old-age pension will result in decreasing pension benefits for all.

“After applying the valorisation model proposed in the draft law, not even the lowest pensions will grow by the [same] rate that would be achieved with the current model of valorisation,” Ewiak told The Slovak Spectator.

Vajnorský said that to seriously assess the value of a pension in Slovakia, one must consider three categories of pensioners: what he called ‘long-time pensioners’, those who had retired more than six years ago; ‘fresh pensioners’ who retired after 2004; and those drawing early retirement benefits. He points out that the average monthly benefit for the largest group, the 733,000 long-time pensioners, is only €299.70 while the fresh pensioners, about 198,000 retirees, receive an average of €373.00 – a difference of about 24 percent.

This means that a majority of pensioners are at the edge of poverty, Vajnorský said, and he is convinced that the proposed change would only worsen the situation. He suggested that if, for example, the inflation rate is 1 percent and the average growth of wages is 3 percent, pensions based on the Swiss model would increase by 2 percent but the proposed model would provide for only a 1 percent increase.

“Pensioners carefully follow happenings in the country, the state’s efforts to find solutions for better redistribution of finances in the budget, and efforts to save funds because of the impacts of the crisis,” said Vajnorský. “But we are against pulling into the game those hundreds of thousands who are approaching the level of poverty and these proposed changes would definitely drag them there.”

Ewiak warned that many pensioners would also become eligible to receive state social aid given to those in material need. He pointed out that there is a large group of citizens who were unable to personally save for their retirement years because of the low wage levels in the former socialist Czechoslovakia and those in that group who have now retired, or will soon do so, will be seriously affected.

Mihál stated that he is convinced that his proposed model is socially fair.

“We could have, for example, modified the retirement age or cancelled the Christmas bonus to pensioners, but we haven’t done so,” Mihál said, as quoted by SITA.

He insisted that the new system will not harm those pensioners with lower benefits but will rather curb the monthly income of those who receive above-average pensions.

Mihál said that increasing the retirement age, which currently stands at 62, would be unethical since the life expectancy of men in Slovakia is only 71 years and that on average men receive their pensions for slightly less than a decade.

Peter Goliáš, the director of the Institute for Economic and Social Reforms (INEKO), an independent think tank, has said that if the annual valorisation method is reduced to only the level of inflation and the normal retirement age is increased to 65, the so-called pay-as-you-go pension pillar, the government-mandated system administered by Sociálna Poisťovňa, would be sustainable until 2040.

“I deem an increase in the retirement age as crucial,” Goliáš stated, as quoted by TASR.

Regarding eliminating the possibility to receive an early retirement pension and draw a regular wage at the same time, Radičová said that the right to retire early was originally extended to people over the age of 50 who had lost their jobs and were unable to find other employment and that is why the government is now proposing the restriction.