TO CONSOLIDATE the state’s finances the government of Iveta Radičová adopted a number of changes on September 22 which will now be subject to approval by parliament. An increase in value added tax as well as higher excise taxes and the cancellation of many tax exemptions should, along with other moves, bring an additional €770 million into the state’s coffers next year. 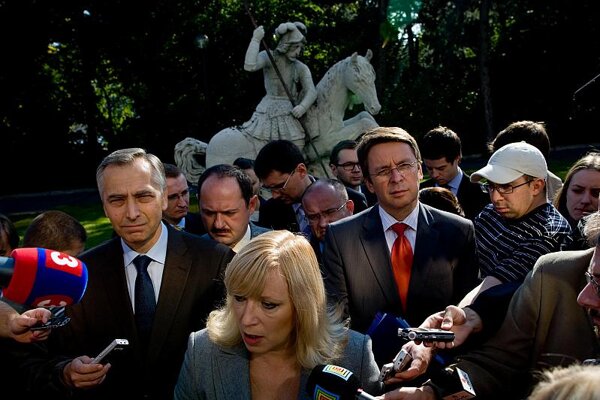 TO CONSOLIDATE the state’s finances the government of Iveta Radičová adopted a number of changes on September 22 which will now be subject to approval by parliament. An increase in value added tax as well as higher excise taxes and the cancellation of many tax exemptions should, along with other moves, bring an additional €770 million into the state’s coffers next year.

Among the most significant decisions is to increase the value added tax (VAT) by one percentage point to 20 percent as of January 2011. VAT should return to the current 19-percent level when the general government deficit falls below 3 percent of GDP. According to the consolidation plan, Slovakia should reach this point as early as 2013. While a lower VAT rate of 10 percent for books, medicines and some health-care products will be continued, according to the Sme daily, the reduced 6-percent VAT rate for farm-gate sales of agricultural products will be abolished and such sales will be taxed at the full 20-percent rate.

Prime Minister Radičová admits that the VAT increase, which she labelled ‘Fico’s tax’ in reference to the previous government, under which the budget deficit ballooned, could increase some prices but said she believes this step to be a lesser evil.

“We have said openly that we consider this to be a lesser evil than any other decision in order to solve the financial situation in Slovakia,” she said, as quoted by the SITA newswire.

Former prime minister Robert Fico, who leads the largest opposition party, Smer, called the VAT hike the worst right-wing solution, through which the ruling parties have violated what he said was their pre-election promises not to increase taxes. He rejected arguments by some experts that the one percentage point rise in VAT would not be reflected in higher prices. The experts predicted that merchants would absorb most of the increase through a fall in their revenues.

Analysts expect that citizens will feel only a minimal impact from the VAT increase and estimate the measure will increase prices by 0.5 to 0.8 percent, SITA wrote.

The Finance Ministry concedes that there will be some impact on prices. Due to a rise in energy prices and given the effect of consolidation measures the ministry expects prices to grow by an extra 0.7 percent in 2011. Thus average headline inflation should be 3.7 percent and the harmonised inflation rate should be 3.5 percent in 2011.

“If the increase in VAT, excise taxes, fees and cancellations of some exemptions are reflected in higher prices of goods and services, then the impact of these measures in the average annual inflation would be 1.25 percentage points,” the Finance Ministry writes in its latest macroeconomic development prediction.

The government is asking parliament to approve rises in the excise tax rates levied on beer, tobacco and other goods.

These changes should generate an additional €14.9 million for the state budget, according to the ministry.

An increase in the excise tax on tobacco products is planned to come into force in two phases. The first increase takes effect on February 1, 2011, while the second rise is scheduled for March 1, 2013.

The rises will allow the Slovak government to comply with EU requirements to gradually increase the excise tax rate to at least 60 percent of the weighted average price of cigarettes by 2014. The minimum rate should not be below €90 per 1000 cigarettes. Higher excise tax on tobacco products should contribute €15.9 million to revenues in 2011 and €21.2 million in 2012, the TASR newswire wrote.

The cabinet also cancelled excise tax exemptions on coal and natural gas used by central heating companies for generation of heat for households because this was at odds with a European directive on taxing energy products and electricity. Simultaneously, the cabinet also cancelled the tax exemption on Compressed Natural Gas (CNG) used as a motor fuel. The revision to these laws, to be effective on January 1, 2011, will generate additional revenue of €8.6 million in 2011 and €14.2 million in following years.

Consolidation measures will also affect income taxes as of 2011. Among other measures, the cabinet cancelled the exemption for those saving for retirement in the so-called third pillar, via supplementary pension insurance or through holding long-term life insurance policies, that permitted them to lower their final income tax. If approved, taxpayers will pay €76 more in income taxes annually.

Robert Kičina, the executive director of the Slovak Business Alliance, said he regards the agreed changes in income and payroll taxes as more moderate than those originally proposed.

“Since the main stress is being put on indirect taxes and less stress is being placed on changes in direct taxes, the overall negative impact on the motivation of people to work will be lower,” Kičina told The Slovak Spectator in an earlier interview. “Moreover, from indirect taxes the state will have additional revenues immediately, which is another positive feature.”

Kičina perceives the proposed unification of the rates of the lump-sum tax allowance, which self-employed people can apply when they do not want to keep itemised accounts, as a sensible compromise.

But this change has not pleased Slovenský Živnostenský Zväz (SŽZ), which clusters the self-employed, trade license holders and craftsmen. On September 22 its presidium adopted a statement that the existing system reflects the material demands of some trades and that the change will bring a greater administrative burden for those trades with higher expenditures.

From the viewpoint of the stabilisation of public finances Kičina believes that the proposals to increase VAT and excise taxes are the most beneficial measures.

“I also perceive positively the removal of some exemptions,” he said. “I am convinced that the tax system and the calculation of tax itself should be as simple as possible. This is also the case for payroll taxes, but the submitted proposals [in this area] rather complicate the system.”

When proposing changes to improve the existing tax system in Slovakia, Kičina suggests integration of the collection of payroll taxes and the introduction of a single return for income and payroll taxes which can be submitted electronically.

Employers have already criticised the adopted consolidation package. They believe that adoption of the proposed measures will hit farmers, food producers and the self-employed hardest, adding that via increased payroll taxes the changes will affect all entrepreneurs as well as employees.

The Federation of Employers’ Associations of the Slovak Republic (AZZZ) proposes that the cabinet, instead of making changes to excise and income taxes, instead cuts state expenditures more and temporarily increases the value added tax by another 1 percentage point, to 21 percent.

“We understand the need to consolidate the public finances, but we are convinced that it should be done in another way,” Rastislav Machunka, AZZZ vice-president, wrote in a statement. “The cabinet, which wants to enhance the business environment and increase employment and citizens’ quality of life, should avoid adopting measures which negatively affect not only entrepreneurs but also common citizens, especially through further increases in unemployment.”

According to AZZZ, a bigger VAT hike would mean stronger consolidation of public finances while its temporary nature would satisfy the political need to reduce the burden of taxes and contributions.