The high administrative demands of the Slovak tax system

WHILE its flat tax is positively perceived by private individuals as well as corporate entities, the tax system as a whole in Slovakia is seen as complicated and burdensome. Even after extensive tax system reform it is administratively demanding and usage of electronic means in processing tax forms remains at a low level in Slovakia. 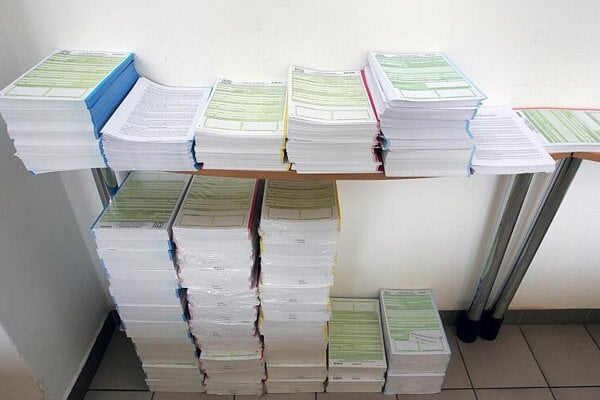 WHILE its flat tax is positively perceived by private individuals as well as corporate entities, the tax system as a whole in Slovakia is seen as complicated and burdensome. Even after extensive tax system reform it is administratively demanding and usage of electronic means in processing tax forms remains at a low level in Slovakia.

The high demands of the Slovak tax system were confirmed by the results of a recent survey; the World Bank has also described it as excessively administratively burdensome for businesses.

“Slovakia is 119th in the 183-country ranking comparing countries according to the administrative complexity of their tax systems,” Robert Kičina, the executive director of the Slovak Business Alliance, told The Slovak Spectator. “Within the OECD we are 6th from the bottom. Only the Czech Republic, Hungary, Japan, Italy and Poland placed worse.”

Slovenský Živnostenský Zväz (SŽZ), which clusters the self-employed, tradesmen and craftsmen, stated that the Slovak system is simpler from the point of view of administrative demands when compared with neighbouring countries, especially following the introduction of the flat tax, i.e. 19 percent income and value added tax, in 2004.

However, Bart Waterloos, a partner in the law firm VGD Bratislava, identified significant administrative demands in the tax system in Slovakia “because many requirements are very detailed and there is no application of any ‘materiality’ principle and certain requirements are absurd from a managerial point of view”.

With the aim of soliciting opinions from foreign investors who have had real-life experience with the Slovak tax system, BMB Leitner organised a survey in May together with local chambers of commerce from the US, Germany and Austria. Even though many respondents said that Slovakia’s tax rate is a competitive advantage for the country in attracting foreign investors, almost two-thirds of those surveyed also labelled the system of tax administration as ‘burdensome’ or ‘very burdensome’.

The administrative complexity of the Slovak tax system is comparable with other countries in central and eastern Europe, according to the report prepared by BMB Leitner.

“For example, [tax] administration in the Czech Republic is equally as demanding as in Slovakia, while in Romania it is certainly even a bit more demanding,” Renáta Bláhová, a partner with BMB Leitner in Slovakia, told The Slovak Spectator. “But we [Slovakia] are lagging behind western European countries, where tax systems are mostly constructed from the viewpoint of a taxable entity as the user. At question is not only the tax system itself but also [a taxpayer’s] relationship with the tax office. For example, in neighbouring Austria the tax administration looks on tax entities more as users. I think that these differences result especially from Slovakia’s historical development, as the free market was absent before 1989.”

When looking through the eyes of business entities, Bláhová said she sees a taxpayer’s administrative duties towards tax offices as the most demanding among the burdens of the system. These administrative duties are also those perceived most negatively in the survey. When assessing the administrative side of the tax system, the surveyed companies ranked time demands, binding deadlines, and the complexity and number of various tax forms all to be moderately or highly burdensome.

“These all require a lot of administration just to claim some small expenses,” Waterloos told The Slovak Spectator.

With regards to individual groups of businesspeople Waterloos and Kičina perceive the system as being administratively demanding and definitely discouraging for small and medium-sized companies.

“If you want everything to be prepared for a possible tax review, you are almost obliged to use the assistance of specialists or an external tax advisor,” said Waterloos. “But in many cases these extra costs do not add any value to your core business.”

Bláhová commented that the Slovak tax system is administratively demanding for all businesses but that the largest companies have more duties in some cases. But she noted that larger companies can afford to have specialised departments and they can tackle the administrative demands more easily. Smaller businesses often cannot afford to staff specialised departments and Bláhová noted that although they can outsource these services in many cases this can still generate a significant distraction from their business efforts.

SŽZ agrees that for a bigger company the extra administration is not necessarily a problem, but that individual trade license holders or small companies, which often use external accountants, sometimes experience ‘nightmares’.

“There are a lot of announcement duties, deadlines, various statistical reports and simultaneously sanctions for failed deadlines hovering over an entity,” Viola Kromerová, the secretary general of SŽZ told The Slovak Spectator. “In the case of a small company which employs up to 10 people this can amount to more than 100 announcements during one year.”

Kičina as well as Kromerová also see the stability of the tax system, i.e. relatively infrequent changes to regulations, as being important.

Kromerová perceives this as a consequence of bad organisation, but points out that while such failures are accepted when they are made by the state administration, if a taxpayer is late or makes a mistake he or she must pay penalties.

Kromerová further pointed to the excessive frequency in changes to legislation.


“Laws are being changed extremely often,” Kromerová said, adding that this is probably the biggest problem. “When you ask a businessman what support he needs, certainly most of them wish most for a more stable business environment and also greater support from the state from this viewpoint. Also now, after a new government has taken power, almost all laws will be revised. This means increased attention for economists, different conditions and a new approach to business plans. Businesses must constantly learn new administrative proceedings and consequently have less time for new technologies and innovations, and ways to enhance their work.”

Official electronic communication is not very common in Slovakia yet, even though it is perceived as one way to make the whole system more effective.

“The tax office is one of a small number of offices where the guaranteed electronic signature can be used,” said Kičina. “The low usage of this means by businesses is linked with the restricted opportunities to use it at other portals. But I would also expect a more active approach from tax offices and a widening of the opportunity for electronic communication with taxpayers beyond the guaranteed electronic signature.”

Waterloos pointed out that the system of electronic signatures is not adjusted for external tax advisors who often represents tens of clients.

“Secondly, it would be an improvement if all the formal communication would first be delivered by electronic means and only in case of non-delivery via paper,” he said, adding that something of this kind has now been introduced in the Czech Republic.

“A significant change took place earlier this year in the processing of value added tax (VAT),” said Bláhová. “In spite of initial and still-persisting technical problems it seems that electronic submission of VAT and sales lists will work. But it is questionable whether small businesses will be able to secure access to it.”

The survey results showed that businesses perceive the submission of electronic forms rather than paper forms to be the most effective tool in reducing the time demands of Slovakia’s administrative requirements. The report noted that only after this is done will it be possible to reduce the administrative duties linked to tax returns and that better-trained tax officials and better-equipped tax offices might also follow.

Kromerová points out that even though e-banking, e-tax and submission of various reports by electronic means can save a lot of time, the introduction of a more progressive system is not simple when costs and concerns over security of documents are in question.

Real life has shown, according to Kromerová, that even though electronic communication can make all the processes simpler it requires investment on the side of those entities processing data as well as users on the other side.

“We have experience suggesting that weaker networks are sometimes a barrier,” she said, citing the recent breakdown of the tax administration portal. Close to the deadline for submitting income tax returns in late March this year, the internet portal of the Tax Directorate was unable to handle the increased load of electronically submitted tax returns and failed.