THE 12TH year of the international Grand Prix for steam engines took place on September 11 at its traditional venue at Zvolen railway station. 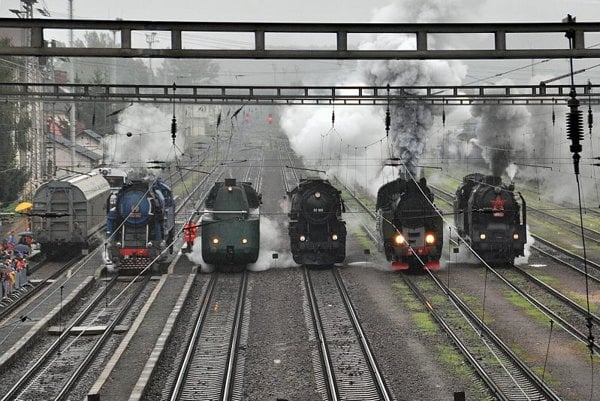 THE 12TH year of the international Grand Prix for steam engines took place on September 11 at its traditional venue at Zvolen railway station.

The first steam engine arrived in Bratislava on August 20, 1848 when the newly constructed Great Hungarian Central Railway brought these engines to what was then called Pressburg or Pozsony, opening the country to railway transport and gradually bringing industrialisation and connections with other European states.

“The competition in Zvolen included several disciplines such as ‘Ladies on the Tracks’, ‘Revenge of the Red Indians’, '‘Modern Knights’, and ‘Beer on the Coupling Rod’ as well as a sprint race where the accuracy of stopping was crucial”, Peter Oravec, the head of the Club of Historical Technology in Zvolen, told the TASR newswire. He added that he thought the most interesting competition this year was a new one, a unique European race – a 100-metre sprint in which five modernised diesel engines raced at the same time.

The audience also appreciated the opportunity to view the historical train Štefánik, an armoured train which was used during the Slovak National Uprising (SNP), that later underwent reconstruction and was furnished with exhibits from World War II. “Originally, we planned to show the train in action and make the show even more attractive but the weather marred our plans,” said Stanislav Mičev from the SNP Museum in Banská Bystrica.

The weather also interfered with a plan to have planes ‘bomb’ the armoured train in a simulated air attack on September 12 at Dobrá Niva – the site of actual aerial raids during the war. “This was the first time we experienced such bad weather. Usually, we have five to six thousand visitors but the number was reduced this year due to the weather,” Oravec told the SITA newswire.

The competing steam and diesel engines came from Slovakia, Poland, the Czech Republic, Hungary and Austria; the Czech Republic also sent two additional engines that were just for show and did not compete. Visitors also had the opportunity to ride trains pulled by steam engines between Banská Bystrica and Banská Štiavnica. A steam engine also pulled a modern fast train, the Domica, into the Zvolen cargo station just for this occasion. Even though the weather did not cooperate with this year’s Grand Prix, the event’s organisers still made the racing competitions attractive for the public and let visitors view nostalgic technology that once was pioneering and modern.