JÁN Slota will continue ruling the Slovak National Party (SNS) for another four years. He was re-elected to the post with 180 votes, about two-thirds of the delegates to the party’s congress, leaving his three challengers far behind and stirring debates about how internally democratic SNS is and what future awaits it with Slota as its leader. The main criticism of SNS current situation comes from within the party: Anna Belousovová, who failed to maintain her post as deputy chair, said the congress was manipulated and that SNS is on its way to political oblivion under Slota. 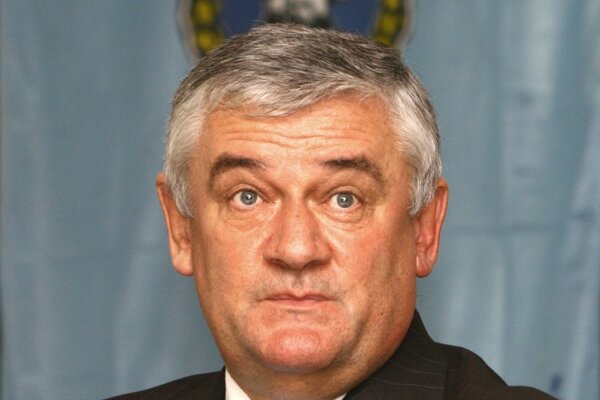 JÁN Slota will continue ruling the Slovak National Party (SNS) for another four years. He was re-elected to the post with 180 votes, about two-thirds of the delegates to the party’s congress, leaving his three challengers far behind and stirring debates about how internally democratic SNS is and what future awaits it with Slota as its leader. The main criticism of SNS current situation comes from within the party: Anna Belousovová, who failed to maintain her post as deputy chair, said the congress was manipulated and that SNS is on its way to political oblivion under Slota.

Out of the 271 delegates at the 17th congress of SNS on September 25, as many as 180 supported Slota for the chair of the party while his challengers received significantly less. Deputy chairperson Anna Belousovová garnered 45 votes, Dušan Švantner got 40 and former Supreme Court judge Tibor Šafárik received only six votes.

Prior to the voting, the congress voted on the method that would be used and a majority of the delegates, 159 of them, voted to hold a open ballot rather than a secret ballot. This option was supported by Slota, while Belousovová was seeking a secret ballot. Observers have expressed the opinion that if the election had been secret, Belousovová’s chances against Slota would have been much better.

The congress elected Andrej Danko from the village of Miloslavov to take Belousovová’s post as the first deputy chair of SNS. Other deputy chairs are Peter Petko of Spišská Nová Ves, Ján Ikrényi from Štúrovo and SNS parliamentary deputy Rafael Rafaj.

Belousovová said after the vote that she considered the elections undemocratic but that she would not challenge the results. The SITA newswire reported that she said delegates received ballots in different colours with names of the candidates which on the reverse side featured the number of the delegate as stated on the attendance list.

“Each ballot could have been identified to see who voted for whom,” Belousovová said as quoted by SITA. “Those weren’t free elections. They prove that SNS is not democratic. It’s all manipulated and the congress was an absolute slapstick comedy.”

She also claimed several delegates admitted to her that pressure had been put upon them.

Political analyst Miroslav Kusý stated that Belousovová’s chances for the party’s chair could have been higher in a secret ballot but pointed out that the difference between Slota’s votes and hers was quite large.

“Such a big difference says something about the attitudes within SNS,” Kusý told The Slovak Spectator.

Belousovová remains a member of the SNS but she is establishing an internal party platform which she will head and which she said would push forward the democratisation and revival of SNS, SITA reported.

Slota says there was no pressure

Slota refuted the accusations of putting pressure upon delegates to the congress to ensure his victory. He also disagreed with the opinion that by not proposing some vice-chairs to be re-elected, he side-tracked them.

“As a chairman I proposed new ones,” Slota said as quoted by SITA. “People wanted new faces, so here the new faces are.”

Slota said the next day during a political discussion on public-service STV that he was not jumping for joy as he is now the main target for all. He repeated that he ran for the post because chairpersons of district organizations, other members of SNS, and representatives of other opposition parties as well as governing coalition parties asked him to do so.

“They were just terrified by the idea that someone else, maybe in a skirt, could sit on the chair of the [SNS] party leader,” Slota said.

Belousovová had already claimed before the election that she would not leave the party if she was not elected chair, and she stressed that also after the election.

“I’m staying in the party because it is not possible to privatise the party,” she said, as quoted by SITA.

Despite that, the present situation brings back memories from the period between 2001 and 2003, when Belousovová (then using her maiden surname Malíková) was heading SNS. Slota led a group of renegades who, in October 2001, established a competitor party which they called the Right Slovak National Party (PSNS), after their faction was expelled from SNS for voicing their opposition to Malíková’s perceived use of undemocratic methods in an internal election in December 2000.

“She's a crazy cow,” Slota said at that time. “She should go see a psychiatrist.”

The relationship between the two parties was far from friendly. In April 2002 Malíková called Slota a “nouveau riche Slovak who was only after money”. In the spring of 2002 the two parties nevertheless held negotiations about the possibility of presenting a common candidates' list for the September 2002 parliamentary election. The talks ended in a fiasco as Malíková offered Slota and the other PSNS members such low positions on the candidate list that they did not have a chance of reaching parliament.

Opinion polls showed the two parties together would gain 15 seats at the most and most of the PSNS members were placed below 140 on the list. Consequently, the parties ran in the election independently and both failed to reach the 5 per cent threshold needed to reach parliament. The PSNS won 3.65 percent of the vote and the SNS won 3.32 percent.

The support for the two parties remained around 3 percent after the election which led to intensifying their unification efforts.

“Slovakia needs one strong national party, which will defend the interests of [ethnic] Slovaks,” said Malíková in February 2003.

At a joint congress on May 31, 2003, the SNS and PSNS agreed almost unanimously to reunify and take the name the Slovak National Party. Slota was elected the chairman of the newly unified SNS and Malíková became a deputy chair. She held the post continuously until losing her position at the recent congress.

Kusý believes there is a chance that SNS might split again now, particularly if Belousovová carries out her promise to establish a faction within the party. But the bad experience from the previous split is still fresh and might prevent her from leaving SNS.

“At that time it did not end up well for either of them so they will certainly be much more cautious when taking such steps now than they were in the past,” Kusý said.