“NOBODY in Britain would dream of people being given immunity,” said Britain’s Secretary of State (i.e. minister) for Justice and Lord Chancellor Kenneth Clarke during a visit to Bratislava on September 28, addressing one of the most-discussed issues in Slovak politics today. 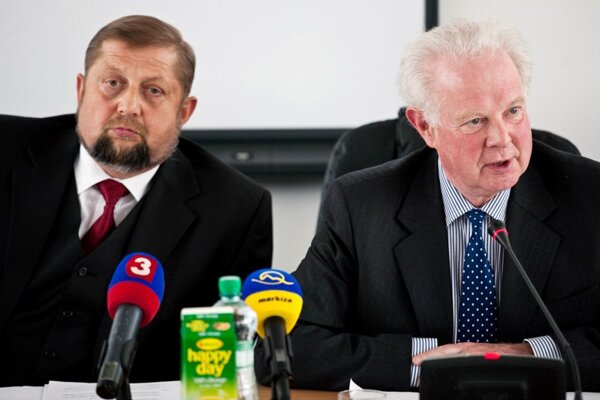 “NOBODY in Britain would dream of people being given immunity,” said Britain’s Secretary of State (i.e. minister) for Justice and Lord Chancellor Kenneth Clarke during a visit to Bratislava on September 28, addressing one of the most-discussed issues in Slovak politics today.

The continuing immunity of Slovak MPs and judges from criminal prosecution has risen to the top of the political agenda due to two recent events: a referendum which included a question on whether immunity should be restricted; and a government proposal to curb immunity which was vigorously debated in parliament before the referendum and should see a final vote at parliament’s October session. While visiting Slovakia, Clarke offered his own insight into the issue.

“If you drive drunk, you will be prosecuted regardless of whether you are a judge or a member of parliament,” he said, as quoted by the SITA newswire. According to him, MPs have absolute freedom of expression in parliament, but the criminal law applies equally to everyone in the UK. He said there were separate measures to protect the independence of judges.

By way of illustration, Clarke referred to a scandal involving several British MPs who are suspected of having unlawfully claimed money for various purposes to which they were allegedly not entitled. Four of them, during criminal prosecution, have cited the principle of parliamentary privilege in their defence, insisting that they cannot be prosecuted for crimes committed on the grounds of parliament. However, their claim was rejected and all four have lost their trials at both the first- and second-instance courts; Clarke said he would be surprised if Britain’s Supreme Court, where their cases are now headed, were to uphold their appeals, SITA reported.

Clarke, who is also known as a champion of anti-corruption measures, visited Bratislava on September 27-28 as part a tour of three EU member states to look at justice and home affairs issues. He met Slovak Justice Minister Lucia Žitňanská, Interior Minister Daniel Lipšic and parliament’s Constitutional and Legal Affairs Committee. His two-day programme also included sessions with British investors in Slovakia and representatives of the legal community, the British Embassy in Slovakia reported.

“I am delighted to be visiting Slovakia, and meeting my counterparts here,” Clarke said. “Both our countries enjoy the benefits of membership of the European single market, and share responsibility for maintaining and strengthening it. Justice and home affairs co-operation is crucial if we are to help our businesses prosper across Europe, and keep our citizens safe from harm. I have discussed these issues in my meetings with colleagues here.”

Clarke also discussed the fight against corruption with his Slovak colleagues. He said he had been following with great interest the approach of the Slovak government to tackling those issues.

“In the UK we are in the process of implementing a new Bribery Act which will greatly enhance our own ability to deal effectively with bribery both at home and abroad,” Clarke said. “We all agree that constant challenges such as these are best met through close co-operation and I look forward to working together with colleagues here to achieve this goal.”

During Clarke’s visit to the Justice Ministry, another visit took place simultaneously in the same building: a senior British judge, Lord Justice John Thomas, was visiting the Supreme Court at the invitation of the court’s president, Štefan Harabin.

Harabin, who supports continued immunity for judges, invited Sir John to give an opinion on the issue.

Lord Justice Thomas said following his meeting with Harabin that in most EU countries judges don’t enjoy immunity from prosecution, SITA reported. He said that there have to be mechanisms in place to ensure a fully independent investigation in the event that a judge is suspected of committing a crime. Such an investigation should be secured by experienced prosecutors and police officers who are absolutely independent from any influence from the authorities, he said.

One guarantee of an independent investigation is that the investigator does not report to the judicial authority right away, in order to ensure their independence. Such protection should be sufficient, according to Sir John.

Lord Justice Thomas also commented on the issue of a judge entering the political scene and then returning to the judiciary, which was the case with Harabin, who returned to the post of Supreme Court President, after serving as justice minister under the previous government. If a lawyer becomes a politician, he or she usually definitively chooses the path of professional politics, Lord Justice Thomas said, adding that of course there can be differences between countries.