IT SEEMS that the dominance of the state-owned railway company Železničná Spoločnosť Slovensko (ZSSK) is coming to an end. Two private companies have unveiled plans to begin new rail services between Slovakia and the Czech Republic. This decision shows that there is space to grow Slovak railway transport – but also places a question mark over some of the state subsidies paid to the loss-making ZSSK. 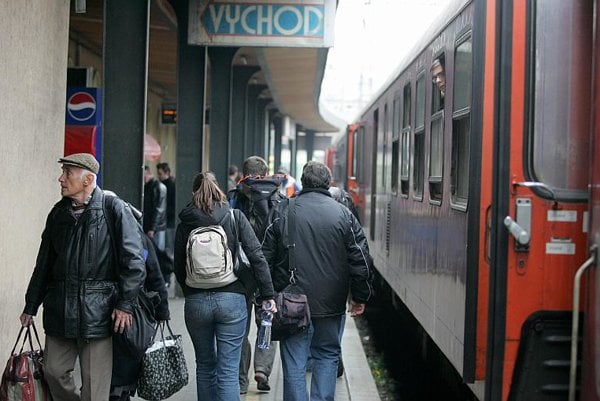 Passengers could benefit from competition on the rails. (Source: SME)
Font size:A-|A+

IT SEEMS that the dominance of the state-owned railway company Železničná Spoločnosť Slovensko (ZSSK) is coming to an end. Two private companies have unveiled plans to begin new rail services between Slovakia and the Czech Republic. This decision shows that there is space to grow Slovak railway transport – but also places a question mark over some of the state subsidies paid to the loss-making ZSSK.

Earlier this year Student Agency, a private Czech passenger transport company known for its distinctive yellow buses, unveiled a plan to enter the passenger rail transport market in Slovakia. Next year, its daughter company RegioJet wants to run trains on the Prague-Ostrava line, including services to Žilina in Slovakia. Not long afterwards another private company, Slovakia’s Wagon Service, made public its plan to offer a regular evening passenger service by rail between Košice and Prague from next year.

Experts believe that it will be passengers who in the end benefit from increased competition.

“The announced arrival of private companies in the regular passenger railway transport segment is in fact an advance signal of the start of the liberalisation process in Slovakia,” Stanislav Hreusík, project manager at the Transport Research Institute, told The Slovak Spectator. He added that it could do some good when the need to increase the quality of passenger rail transport in the country is taken into consideration.

Hreusík hopes that mobilisation of as-yet unused opportunities in rail transport will be targeted towards passengers, and that in the end they will be the ones to benefit from this development.

“The competitive environment, which guarantees equal market access conditions, has its risks: not for the consumer, but especially for the previous monopoly supplier,” Hreusík said.

ZSSK does not currently consider the two companies a threat to its dominant position, however.

“We realise that liberalisation of the transportation market is here, that everybody has the opportunity to show an interest in operating trains,” ZSSK spokesperson Miloš Čikovský commented in response to the expected arrival of competition, as quoted by the SITA newswire in mid August. He added that one should realise that ZSSK dispatches about 1,500 trains a day and thus a new carrier with one line cannot change the situation in the rail transport market.

Student Agency, which has used its yellow buses to launch something of a transport revolution, especially in terms of passenger comfort, is entering passenger rail transport in the Czech Republic via its daughter company RegioJet. It is eyeing long-distance as well as regional routes.

“RegioJet will start to provide regular railway transport on its own business risk especially on the territory of the Czech Republic – on the Prague-Ostrava route,” Aleš Ondrůj from Student Agency told The Slovak Spectator. “Some of the lines will continue to Žilina [in Slovakia].”

Žilina was picked up as an important transit hub enabling travellers to continue their journeys to their further destinations in Slovakia via ZSSK lines. Equally, Student Agency sees Žilina as an important centre, with people frequently travelling to the Ostrava region and further into the Czech Republic, including Prague.

For the time being RegioJet is intensively preparing for the launch of rail services in the first half of 2011. This summer, passengers in the Czech Republic were able to try its services during presentation rides. In the future RegioJet also wants to run trains on the Prague-Košice route.

“Our company has already entered the overnight railway passenger transport market several times, but these ventures were outside Slovakia,” Ivan Gálik, the owner of Wagon Service, told The Slovak Spectator as he explained why his firm has decided to offer a regular evening service between Košice and Prague.

Wagon Service offered a route between Berlin and the Swedish city of Malmö in 2000 and 2001, and between Venice and Paris in 2008. Nor are these the only experiences the company has of offering passenger rail transport in Europe. Wagon Service has been operating charter services on the EU rail network for 10 years, mostly using its own carriages, which it also designs.

Both Student Agency and Wagon Service see a space for private companies on the railways. Radim Jančura, the owner of Student Agency, perceives the Czech railway company České Dráhy as a black hole which swallows billions of Czech crowns each year; and Gálik sees Slovakia’s railway passenger transport as still lagging a long way behind when compared with neighbouring countries. According to Gálik, the quality of regular rail passenger transport in Slovakia is increasing slightly, particularly in terms of the quality of passenger cars and compartments.

Gálik sees a good opportunity in regularly scheduled passenger rail services because a significant number of passengers are currently travelling by bus. Gálik attributes that fact to the poor quality of rail services currently on offer.

“The quality [in Slovakia] has been improving at a significantly slower pace than in neighbouring countries,” Gálik said, adding that this slower improvement has been the case since 1993.

Wagon Service will provide detailed information about its planned overnight train between Košice and Prague at least 30 days before the first scheduled trip.

In Slovakia, each company meeting the conditions set by law, among which holding a licence and security certificate are the most important, can run passenger rail transport services on the territory of Slovakia, Ľubomír Tuchscher, the head of public relations at the Ministry of Transport, Posts and Telecommunications told The Slovak Spectator.

“Passenger transport is a loss-making business in most countries,” Tuchscher said, adding that Slovakia is no exception: the state covers the losses of the national carrier, ZSSK, based on an agreement on services in the interest of state, and to the extent set by the state budget law.

In its four-year programme statement the cabinet of Iveta Radičová promised to create conditions to liberalise passenger rail transport within Slovakia.

The Transport Ministry says there is a need to create a competitive environment in order to increase quality and reduce costs in passenger railway transport. But Tuchscher also points out that “under the conditions of Slovakia no carrier has been able to survive so far without an agreement with the state about services in the public interest”.

For now Wagon Service is not considering requesting state subsidies. Gálik said applying for approval of services as transport in the public interest tends to be a difficult and complicated matter. But he does not necessarily see state subsidies as required for successful passenger railway services and believes that in certain cases it is possible to operate passenger transport without such subsidies.

Jančura of Student Agency considers the provision of state subsidies for long-distance lines in Slovakia and the Czech Republic to be unique, according to the Sme daily. He said in an interview with the daily that elsewhere in Europe long-distance Eurocity and Intercity lines are not subsidised but instead are run at the commercial risk of the carrier.

While both private companies have not specified how much they will charge for tickets, passengers should pay the same or less than they do now.

The aim of Wagon Service is to achieve maximum revenues but it knows that its pricing policy must be realistic.

“The fare [for rail transport] is limited by the economic situation in the country as well as competition from buses and aeroplanes,” Gálik noted.

According to the Plus Jeden Deň daily, Wagon Service does not plan to cut fares significantly. It should remain at the current level, about €40 for a one-way second-class ticket from Prague to Košice, the daily wrote in early September. RegioJet, by contrast, wants to draw passengers with enhanced comfort but also with lower prices. According to the Hospodárske Noviny daily, ticket prices should be comparable to bus tickets. Based on this comparison, a ticket from Košice to Prague should cost about €20.

While the railway companies will fight on their own for their portion of the market, they will face a common challenge – the outflow of passengers from public transport to personal transport. ZSSK estimated that overall passenger numbers in 2009 fell by 2 million to 45 million, partly due to the economic crisis, according to SITA.

Hreusík of the Transport Research Institute, who sees the fall as being partly linked to quality-of-life choices, thinks that it is possible to slow this trend only by providing higher quality services based on integrated transport systems.