TODAY the Park Hotel in Shanghai looks like a dwarf beside all the huge skyscrapers forming Shanghai’s modern skyline. Only historical photos prove that at one time, and not so very long ago, this building constructed by Ladislav Hudec, an architect of Slovak origin, was by far the tallest in the city – towering over the mostly flat land and low-rise buildings of Shanghai, the most populous city in China. But the Park Hotel is not the only Hudec-designed building in Shanghai which helped to change the face of the city. 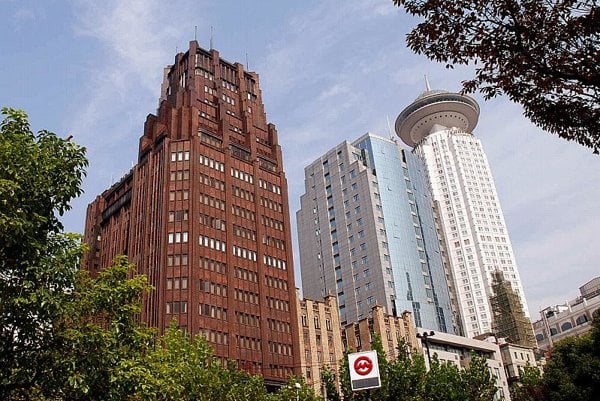 TODAY the Park Hotel in Shanghai looks like a dwarf beside all the huge skyscrapers forming Shanghai’s modern skyline. Only historical photos prove that at one time, and not so very long ago, this building constructed by Ladislav Hudec, an architect of Slovak origin, was by far the tallest in the city – towering over the mostly flat land and low-rise buildings of Shanghai, the most populous city in China. But the Park Hotel is not the only Hudec-designed building in Shanghai which helped to change the face of the city.

Ladislav Hudec is not very well known in Slovakia but a recently premiered film by Ladislav Kaboš opens the lid on his life story and lets viewers peer into the fascinating work and travels of Hudec which extend from Banská Bystrica to China, to Switzerland and America, and then back to Banská Bystrica where he wished to be, and is, buried.

The premiere of the film, The Man Who Changed Shanghai, took place on September 3 on the eve of the official Slovak Day at Expo 2010 Shanghai in the premises of the Grand Theatre – a building which Hudec designed in the 1930s. Public broadcaster Slovak Television, a co-producer of the documentary, premiered the film in Slovakia on September 5.

Via testimony by Hudec’s children, who are now over 80 years old, as well as from previously unknown archival footage, Kaboš’s documentary tells the captivating story of Hudec’s life and work.

Kaboš managed to find all three of Hudec’s children, now living in Monaco, Canada and the United States. Throughout the film they give exceptional testimony about their father and their lives in Shanghai more than 60 years ago.

Hudec was born to a Slovak family in Banská Bystrica in 1893 in the then Austro-Hungarian monarchy. He studied architecture in Budapest and after graduation enrolled for military service. The onset of World War I forced him away to Russia where he was taken prisoner. But he managed to escape to Shanghai, where he quickly proved his abilities and began building a career as an architect. After he married Gizella, the daughter of German businessman Carl Theodor Meyer in 1922, he established his own construction and architectural business with the help of a loan from his father-in-law. He managed to build a prosperous company in a few years and began working on significant building projects.

During the interwar period he designed more than 60 buildings in Shanghai, about half of which are preserved to this day. Most of them are now cultural monuments.

The scope of Hudec’s works is extensive, ranging from family houses, apartment buildings, high-rises, a hospital, a theatre, and even a brewery. He did not follow a distinct architectural style and as one of his children says in the film, he used to say that the most important task of an architect is to produce what the client wants. He did not try to impose his taste on the buildings – instead he insisted on good materials and that that no space be wasted. As a result he constructed his buildings in Neo-Classical, Neo-Gothic, and Eclectic styles as well as Art Nouveau.


A Slovak or a Hungarian?

The film also deals with the theme of Hudec’s nationality, because international literature often portrays him as a Hungarian. Kaboš said he did not want to make this the main topic of the film as it would be petty: in the current world both Slovakia and Hungary are under the same European roof, he said. Via the testimony of Hudec’s children, the director uses their words to describe their father’s relationship with Slovakia.

Daughter Alessa de Wet says in the film that she and her siblings conducted genealogical research and determined that they have no Hungarian ancestors. She also says their father did not teach them either the Slovak or Hungarian languages and he told them only very little about his past life in Europe.

Hudec was a student in the period when Magyarisation was culminating in Slovakia and at that time many Slovaks changed their names for better access to jobs and for a certain period Hudec used a Hungarian version of his name.

Moreover, his sisters married Hungarians and only descendants of the Hungarian branch of these families chose architecture as their careers.

Born during the reign of the Austro-Hungarian monarchy, Hudec as well as his children held Czechoslovak passports after the dissolution of the empire. But during World War II Hudec applied for and received a Hungarian passport.

It is not widely known that Hudec used his position as a Hungarian honorary counsellor to save Jews. He issued Hungarian passports to them so they were able to travel to Canada and the United States.

After World War II, Hudec and his family moved first to Switzerland and then on to the United States but he did not resume his career as an architect in that country.

Thus, the only structure he ever built outside China is a small stone church in Vyhne in central Slovakia. He died in California in 1958.