BLAF presents art for the people

GALLERIES should not be places solely for small, closed communities of artists to meet and display their works to one another, but rather attractive venues for all people – children, students, workers, managers, pensioners – to spend their spare time surrounded by contemporary works of fine art. This is the initiative imagined by the organisers of BLAF – the Bratislava Art Festival – which is the city’s first contemporary visual arts festival, taking place from October 1 to 6. 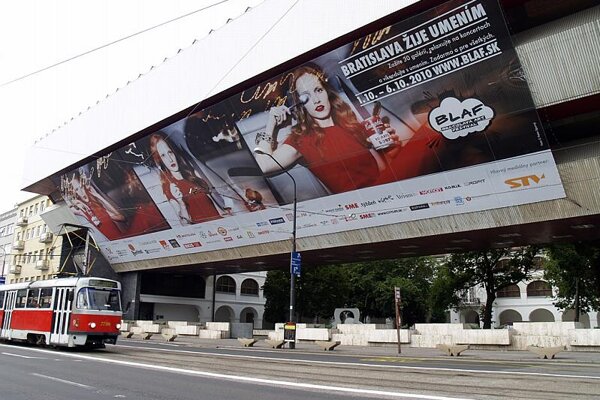 GALLERIES should not be places solely for small, closed communities of artists to meet and display their works to one another, but rather attractive venues for all people – children, students, workers, managers, pensioners – to spend their spare time surrounded by contemporary works of fine art. This is the initiative imagined by the organisers of BLAF – the Bratislava Art Festival – which is the city’s first contemporary visual arts festival, taking place from October 1 to 6.

BLAF emerged from the idea of bringing the contemporary Slovak visual arts scene closer to the public in an attractive, free-and-easy way, said Bohdana Hromádková, the head of the Foundation – Centre for Contemporary Art and the director of the festival, in an interview with The Slovak Spectator. She noted that the organisers of BLAF had attempted a similar initiative a few years ago when they carried out the Auctions of Contemporary Art project. At that time they encountered problems of weak presentation and propagation of contemporary visual art as well as little interest among people in visiting galleries.

“However, the idea to create the festival format emerged very suddenly in February 2010, when Uršula Žúži [now the main coordinator of the festival] came up with the notion of creating this kind of project. In cooperation with the general director of the Slovak National Gallery, Alexandra Kusá, we tailored BLAF into its final form,” Hromádková said. “I have to say we have found great support from our main festival partners, who reacted quickly and helped us to realise our idea.”

BLAF is an event similar to popular, often-visited formats abroad which until now have not had a counterpart in Slovakia.

The festival also offers an educational aspect. During the set events the educational programme allows visitors of all ages to learn more about contemporary art and to try out some artistic techniques, Hromádková said. She included photo workshops and architectural workshops among these.

Altogether there are 27 galleries participating in the festival and the programme includes several accompanying events such as concerts and dance performances.

“I can say that the galleries were excited about the idea of the festival, which they proved with their interesting and rich programme offers,” Hromádková said. “Each participating gallery could select their own format to attract any potential visitor, with no age limits. Their offerings have been published together in the ‘Gallery Map’, along with the location and schedule of the accompanying events.”

As well as opening up the galleries to the general public, the project also opens the galleries to each other, as it helps to encourage cooperation about many cultural subjects and to create a wider, natural network.

Among her top programme picks Hromádková mentioned the opening of the already scandalous feminist exhibition named Holé Baby (Naked Girls) in the Slovak National Gallery on October 5 and the opening of an exhibition that was prepared specially for BLAF: Majolenka in Hangár/Tranzit Ateliéry, by artists Maja Štefančíková and Lenka Klimešová.

For collectors and fans of art, the Foundation – Centre of Contemporary Art and Sotheby’s art auction house are hosting an exhibition and auction of contemporary Slovak art. The auction will be accompanied by lectures given by representatives of two foreign galleries: Jiří Švestka from the Czech Republic and Roxy Walsh from the UK.

“It is our ambition and our wish to organise the festival annually,” Hromádková said. “The first edition will show which programmes are the most attractive to visitors, which of them interest visitors the most, and which of them turn out to be most successful. These outcomes will be key for us in creating the programme structure for next year. In any case, we would like to retain the main ideal of the festival: for everybody to be able to experience the galleries, and their inspiring content, free of charge.”

For more information on the programme and its accompanying events, go to www.blaf.sk.