AT LEAST four people died and 120 were injured when a torrent of toxic red sludge burst out of a holding pond near an alumina plant in the village of Ajka in western Hungary, less than 100 kilometres from Slovakia, on October 4. 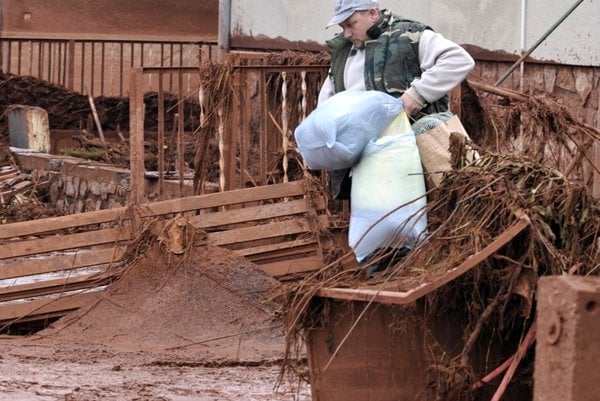 AT LEAST four people died and 120 were injured when a torrent of toxic red sludge burst out of a holding pond near an alumina plant in the village of Ajka in western Hungary, less than 100 kilometres from Slovakia, on October 4.

Hungary declared a state of emergency in three western counties the day after the spill.

The red mud, a waste product generated during the refining of bauxite into alumina, poured through Kolontar and two other villages on Monday after bursting out of a containment reservoir at the nearby Ajkai Timfoldgyar Zrt plant, owned by MAL Zrt, the Reuters newswire reported.

Many people suffered burns and eye irritation caused by chemicals in the mud. The flood wave, estimated to comprise about 700,000 cubic metres of waste, threw cars off roads and damaged bridges and homes, forcing the evacuation of about 500 residents, Reuters wrote.

The rescuers immediately started cleaning the red sludge off the walls of houses and from streets, at the same time attempting to prevent contamination of water sources. Disasters recovery crews are hoping to open the streets of Kolontar soon, which has so far been closed off by the flood, thus allowing residents to return for some of their belongings.

Three Slovak rescuers from the Special Canine Rescue Unit based in Nyrovce in southern Slovakia travelled to Hungary to help their Hungarian colleagues with rescue work. They reached the village of Ajka on the evening of October 4, only a few hours after the disaster struck, and stayed until 03:00, when Hungarian Army units arrived and took over the rescue operation, the Sme daily reported. They reported seeing sights they had never witnessed before.

“It was something abnormal, the streets were completely dirty, and the red mud was taking over everything,” the general director of the service, Alexander Berek, told Sme.

The team of three Slovak rescuers was assigned to search for missing persons in houses, some of which were covered in red mud up to a height of two or even three metres. They found one victim of the disaster, a child who had died inside one of the houses.

“Carrying out rescue work in toxic mud is something different from in normal flooding,” Berek said, as quoted by Sme. He said that the unit’s dogs couldn’t be used at all, and that the rescuers had to wear security clothes to prevent the toxic substance from burning their skin. Berek said that many of the firemen who were taking part in the rescue work had had to go to hospital suffering from burns.

No spill fears in Slovakia

Hungary, unlike Slovakia, has yet to witness a calamity of this kind. A toxic substance spilled in 1971 in the central Slovak town of Žiar nad Hronom, the site of a major aluminium-producing plant, but was not on the scale of the Ajka disaster, Sme wrote. IN the 1971 incident red mud flooded some gardens and houses in the area, meaning their owners gardens weren’t able to grow anything in the soil for a year.

Ján Kalný, the director of the SZNP company that runs a sludge reservoir in Žiar nad Hronom, ruled out the possibility of any similar disaster in Slovakia.

“[The Slovak reservoir] is composed 93-percent of brown mud, the qualities of which are completely different than that of the red [mud] in Hungary,” Kalný told Sme. “In addition, our sludge reservoir is stable, and no mud has been added since 1997.”

The World Fund for Nature (WWF) said on October 6 that it fears the long-term environmental impacts of the toxic mud disaster in Hungary.

The total amount of mud that erupted over six villages in Hungary could have been about one million cubic metres, the WWF said. The material may have been slightly radioactive and contained highly corrosive chemicals as well as toxic elements such as lead, cadmium, arsenic and chromium. It has so far covered around 40 square kilometres, the WWF wrote in a press release.

A third degree alert was called on the Marcal River, where, according to experts, almost all fish in the upper river have already died. The toll on domestic animals suggests that wildlife will be similarly affected.

The mud is highly alkaline, with a pH level of up to 13, so acid is being poured into the Marcal to neutralise it before it reaches the Raba and the Danube Rivers. Red mud was still flowing from the reservoirs around Kolontár, Devecser and Somlóvásárhely on Wednesday, October 6.

“From the information I can gather, the escaped sludge would not normally be a direct threat to the Danube River, but unfortunately we are in the midst of the rainy season and it has rained especially hard in Hungary,” said Andreas Beckmann, Director of the WWF’s Danube-Carpathian Programme. “This means that the sludge will spread faster and further and it is probably inevitable that some sludge will escape into the Danube.”