Waiting for a real change

THE INFORMATISATION of society – the wider use of information technology to improve government, and quality of life in general – has become a kind of mantra in Slovakia. Successive cabinets have repeated their determination to achieve it, promising that it will speed economic development and make public administration more effective. But while the introduction of computers into business and life in general is indeed causing a revolution comparable to that brought by the steam engine during the industrial revolution, for now the results of this process on the government in Slovakia are somewhat weak considering the huge sums of public money that have been spent. Moreover, the field of public IT procurement is widely seen as non-transparent. 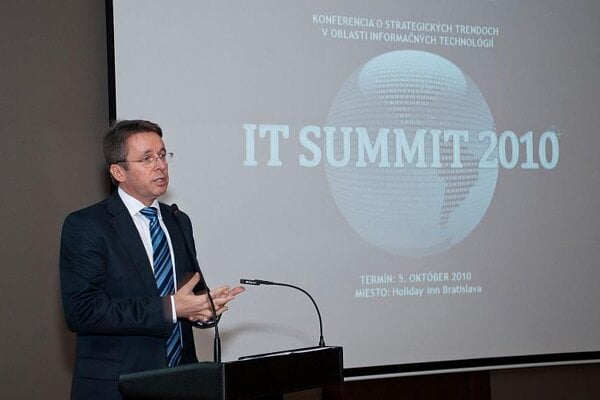 THE INFORMATISATION of society – the wider use of information technology to improve government, and quality of life in general – has become a kind of mantra in Slovakia. Successive cabinets have repeated their determination to achieve it, promising that it will speed economic development and make public administration more effective. But while the introduction of computers into business and life in general is indeed causing a revolution comparable to that brought by the steam engine during the industrial revolution, for now the results of this process on the government in Slovakia are somewhat weak considering the huge sums of public money that have been spent. Moreover, the field of public IT procurement is widely seen as non-transparent.

The IT Association of Slovakia (ITAS), the professional association representing the most important local and international companies operating in the Slovak market for information and communication technologies (ICT), has published a report which paints a far-from-rosy picture of the current situation regarding e-government in Slovakia. ITAS declares its openness to dialogue and cooperation, claiming that the current lack of transparency is harming the whole IT sector. Finance Minister Ivan Mikloš, whose department holds significant powers vis-a-vis e-government, has signalled that the new government of Iveta Radičová is determined to change things and move the informatisation process forward for the benefit of citizens as well as the IT sector.

“The theme of e-government is a hot topic in Slovakia,” ITAS president Juraj Sabaka said at the IT Summit, an annual conference organised by ITAS which took place this year on October 5 in Bratislava. “This is because automation and computerisation of processes, with the pursuant reduction in the administrative burden for citizens and businesspersons, and making the operation of the state more productive are pivotal preconditions for the growth of Slovakia’s competitiveness. On the other side of the table there is crushing criticism of non-transparency and over-paid tenders. But I want to say here that a corrupt environment is harmful for the IT sector, because the best offers usually do not win in such an environment.”

Informatisation of public administration – e-government – is part of the wider process of informatisation across society. In Slovakia, part of e-government is OPIS – the Operational Programme for the Information Society. OPIS is a reference document used as a basis for the provision of EU assistance for all projects concerning e-government, the digitisation and enhanced accessibility of data held by repository institutions, and broadband internet connection.

According to ITAS, computerisation of public administration using European Union funds, i.e.
via OPIS, has not been bringing results and is lagging behind significantly. Finance Minister Ivan Mikloš agreed, calling the last four years a completely lost period.

Minister Mikloš considers the informatisation of society an inevitable prerequisite for transforming Slovakia into a modern and prosperous country, but says the current state of affairs is not good. He believes that if it is properly implemented, informatisation could have huge positive impacts on citizens in the form of better and more accessible services but also in terms of cheaper and more effective public administration thanks to more effective processes and greater transparency.

“Here I would like to say that our basic strategic vision is to push Slovak society and the economy from its current state, which we can define as the economy and society based on industrial mass production… to the knowledge-based economy,” Mikloš said in his speech at the IT Summit, adding that simply put this means the country advancing from manual work and assembly halls to a higher share of work involving brainwork, creativity, highly-skilled work and added value.

“Simultaneously we have to say that we have lost four years, during which we wasted not only time but also huge resources which might have been used to create the preconditions for this transition,” he said.

In his opinion these funds were wasted and in many cases also misappropriated. He agreed with the opinion of ITAS that several state institutions used funding from OPIS to cut their normal ICT funding, which further worsened the situation in e-government.

Mikloš sees previous governments as bearing the primary blame for the current state in terms of retarded e-government, and non-transparency and corruption in IT-related tenders, even though he thinks that IT companies must also bear some share of the responsibility.

When explaining the interests he was referring to, Mikloš said that when the public sector commissions projects, the public interest should be in opposition to the private interest – whereas the opposite is currently true.

Mikloš sees a large gap in knowledge as being behind the asymmetry. This is because officials’ knowledge and information about a problem and the solutions that can be sought through an IT project is significantly below that of IT specialists.

This huge gap, as well as the high symmetry in interests, has led, according to Mikloš, to a situation when the IT sector has become “an El Dorado of non-transparency and corruption”.

“From this point of view it will be one of the key issues to change this,” said Mikloš, adding that it will be the state’s job to set rules securing symmetry in information and asymmetry in interests. The finance minister sees outsourcing as a solution for the future in the case of information asymmetry, meaning for example that an IT specialist will be hired by the public administration to negotiate an IT solution with an IT company.

The finance minister does not see the complicated and widespread distribution of powers over e-government as a barrier to the informatisation of society, as ITAS does. In its document, ITAS calls for a more systemic approach and a change in the current structure. For the time being, there is no one institution responsible for e-government, but fundamental powers are held by the Finance Ministry, the Interior Ministry and the Government Office.

This gave rise to a situation in which individual IT projects were often parallel or overlapping and did not communicate properly. Informatisation was not propelled by business targets, i.e. there were no reforms whose purpose was a fundamental, systematic change in the operation of public administration to optimise processes.

Mikloš said he believes that it is not technical tools but the will to change things and defend the public interest that is most important.

“If there is no political will to change things, then even instruments which originally serve to enhance transparency and effectiveness can serve to concentrate and increase corruption,” he said. “This is why I consider the tools to be important but not primary. The will to change things is essential.”