Slovak kids stand up against poverty

THE SLOGANS “Stand up!” and “We support the Millennium Development Goals!” rang out in the streets of Bratislava on Friday, September 17, when pupils and teachers from the primary school on Hlboká Street marched to the presidential palace in the centre of the city, carrying banners and posters they had made at school. The chants and ruckus they made along the route certainly made every passerby aware of their cause. 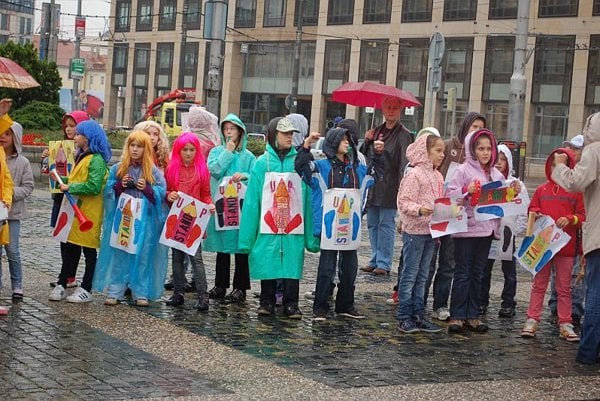 THE SLOGANS “Stand up!” and “We support the Millennium Development Goals!” rang out in the streets of Bratislava on Friday, September 17, when pupils and teachers from the primary school on Hlboká Street marched to the presidential palace in the centre of the city, carrying banners and posters they had made at school. The chants and ruckus they made along the route certainly made every passerby aware of their cause.

Numerous events of this kind were simultaneously held around Slovakia on the same day. Students and other citizens joined the global chorus of voices appealing to the world’s leaders to live up to the goal of ending poverty – as embodied in the United Nations’ Millennium Development Goals (MDG) – and were heard across Slovakia on the weekend of September 17-19. On those days the Stand Up and Take Action campaign, aimed at supporting the MDG, took place all across the globe.

Last year, more than 173 million people participated in the campaign, setting a new Guinness World Record. Stand Up and Take Action is organised globally by the United Nations Millennium Campaign, in collaboration with a wide range of partners, including the Global Call to Action against Poverty (GCAP).

“Preparation for Friday had been going on in our school for the whole week preceding September 17,” Jana Gromová, a teacher from the Hlboká Street school, told The Slovak Spectator. “Both older and younger pupils were enthusiastic to discuss poverty, hunger, and the lack of opportunities for education of many children in the world.”

During English classes the children learned to sing the anthem of the Stand Up campaign and the school also welcomed a member of the Slovak parliament, Miroslav Beblavý, for a discussion about Slovakia’s international development efforts and the MDG.

“As a part of our support, we encouraged children not to waste food in the school canteen,” Gromová said, adding that it was pleasing to see the children bringing back their plates empty and clean.

The march to the president’s palace was planned as a highlight of the school’s Stand Up week, the aim of which was to engage all pupils and teachers in supporting the campaign and in turn advancing the MDG.

“The noise was symbolic for the campaign: to show that we do not want to and will not keep quiet and tolerate the unfulfilled promises of the world’s politicians,” Gromová said.

The world stands up

The Stand Up and Take Action campaign preceded the gathering of heads of state at the United Nations from September 20 to 22, demanding that government officials demonstrate leadership in achieving the MDG.

The Millennium Development Goals are a set of targets designed to eradicate extreme poverty and its root causes by 2015, using the motto ‘Make Poverty History’.

“The Secretary General’s recent report on the Millennium Development Goals has made it clear that with only five years until the deadline by which world leaders have promised to eradicate extreme poverty and its root causes, the active partnership of citizens and governments is more important than ever,” said Corinne Woods, Director of the UN Millennium Campaign.

Numerous events took place in Slovakia, among them an MDG march, an awareness campaign prepared by the graphic design school that included posters and banners, T-shirt and sticker logos, essays, ‘flash mobs’ using the simultaneous ringing of mobile phones, jingling of keys and various ways of vocalising the campaign slogan.

According to Jana Hönschová from the UN Information Service (UNIS) in Vienna, Slovakia’s participation in the campaign was exceptionally strong this year. There were 30 registered events from Slovakia – students from 30 primary and secondary schools all around the country developed and executed their own events to mark the campaign.

“In the European context, Slovakia ranks second in the number of registered events just after Italy,” Hönschová told The Slovak Spectator, adding that most events were held in Bratislava Region because teachers from that area had been able to take part in a Forum for Teachers held at UNIS.

But many successful events took place in other regions of Slovakia as well. The grammar school in the central Slovak town of Hnúšťa, for instance, organised a fundraising event. The students collected material for children in need, following the motto “Give up something that belongs to you and become a donor for others”. The things that were donated will be given to the SOS Crisis Centre. Apart from that, students had the chance to contribute money for schools in Slovakia that were hit by floods earlier this year.

“Students were very positive about helping specific people in the campaign,” Ľudmila Bystrianska, the director of the grammar school in Hnúšťa, told The Slovak Spectator. “Through these activities we would like to teach the students that they shouldn’t be carefree towards their environment and that they should understand that they too can influence the world around them.”

Teachers almost uniformly reported success for their events among students and said they are ready to take part in future campaign efforts.

“We are definitely planning to take part in this campaign again next year because the pupils have realised that not all children in the world have fresh breakfast, lunch and dinner, and don’t know getting up for school as Slovak children do,” Gromová from Bratislava’s Hlboká Street school said.

To learn more about the campaign and the worldwide events held this year in support of the MDG see: www.standupagainstpoverty.org.